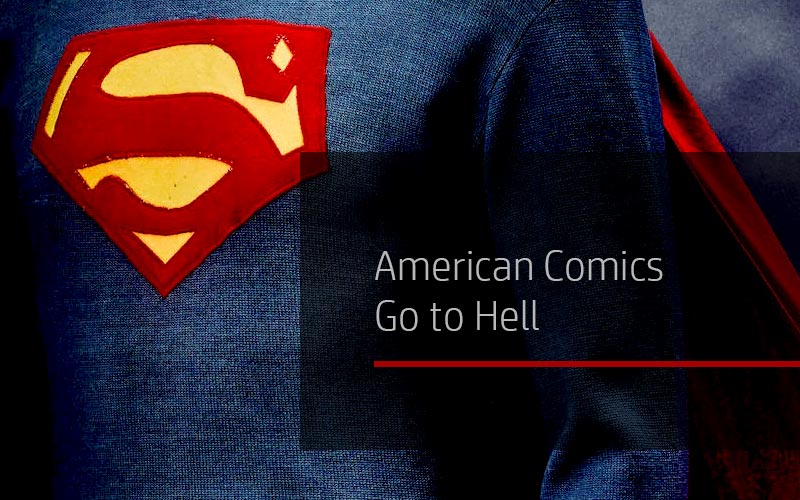 The Comics Go to Hell: A Visual History of the Devil in Comics by Fredrik Strömberg. Review by David Kerekes 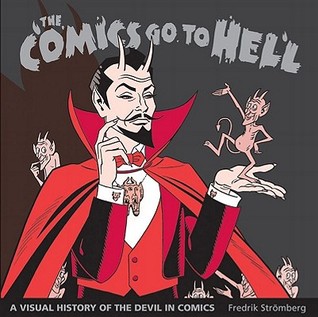 When I was a kid I was given a pile of American comics. I kept them for some time and read them avidly but in growing up, I got rid of all but a small handful something I learned to regret rather quickly. Included in those few copies that I held onto were two issues of Superman (Nos 235 and 236, dated March and April 1971). The stories are self-contained, but do share a theme of sorts. In the first (‘Sinister Screams Of The Devil’s Harp!’), the Man of Steel confronts a famous pianist by the name of Ferlin Nyxly, who dresses like Pan and whose superpowers match his own. It’s a bit of a nothing story, but Nyxly as the “flying demigod … ugliest of the gods” brings to it a nice touch.

In the next issue (‘The Planet Of The Angels’), the story sees the Man of Steel flitting between Heaven and Hell, battling angels and devils. The cover is great, showing two devils with pitchforks at the gates of Hell, goading the Man of Steel as Lois Lane screams from the flames within. “Only the DEAD may enter the GATES OF HELL!” says the first devil. “Dare YOU, Superman?” challenges the second. I will not ruin the story for you (because you are probably headed for eBay right now in search of a copy of your own), suffice to say the grounding of the story is more outer space than it is afterlife, but still it remains a good yarn and the imagery is priceless.

I have since discovered that Hell and demons have a considerable part to play in the stories of Superman, specifically during the seventies when DC decided that new adventures equated with bonkers.

When I picked up The Comics Go to Hell, Fredrik Strömberg’s Visual History of the Devil in Comics, Superman was the first thing that popped into my head. Alas, he isn’t in the book, but that shouldn’t put you off. Strömberg dips into a lot of familiar and unfamiliar strips and comic books in this pleasing volume, predominately American and European in origin. A single, informed page of text and a panel of artwork represent each comic under discussion. The chapters cover everything pertaining to devils and their environ, from the mythology and evolution of the Devil and how the Devil has been interpreted by the comics, interpretations of texts from the Bible, the depiction of Hell, variations on the Faust theme, funny devils, right to through to superdevils (that’s where ‘The Planet Of The Angels’ would have come in, I guess). The Devil is most widespread in the latter comics, even if the author admits to de-emphasising this particular genre. The Devil is the greatest supervillain, “the ultimate standard against which the heroes are measured.” Strömberg states that the myth of the Devil was invoked almost from the very beginning of the superhero genre in the late thirties, but that he really came unto his own in the sixties, citing such examples as Marvel Comics’ Mephisto (who first appeared in Silver Surfer, 1968), Daimon Hellstrom (the Son of Satan), and DC’s Lucifer (the most successful comic to feature the Devil as the main character) and Jack Kirby’s The Demon.

Strömberg considers himself an atheist and vents spleen when it comes to religious “fanatics,” the worse offender being Jack T. Chick and his comic book tracts. He singles out Chick’s The Crusaders (1985), which he regards as “almost medieval in its aggressive and uncompromising tone” and The Contract! (1976), illustrated with a panel that curiously has a Devil looking not unlike Orson Welles! “That these [pamphlets] are so clearly aimed at young, impressionable readers makes my blood boil!” says the author.

Strömberg knows his comics, and readers will discover plenty when it comes to foreign language comics (the German twelve-volume Dante’s Inferno by Akron and Voenix, for instance) and funny comics (the Devil pops up in Donald Duck and Friends #314). However, I’m disappointed that Strömberg neglects to include the most obvious comics genre altogether: horror. Since the forties to the present, horror comics have been serving up devils, demons, Hell and the selling of souls as an integral part of many a story. If you can live with that glaring oversight, you will find much to enjoy in The Comics Go to Hell.

Fredrik Strömberg is pretty slap up to date with his book The Comics Go to Hell. He includes an entry on Gary Panter’s 2004 volume, Jimbo in Purgatory, about which in conclusion he says, “I cannot claim that I fully understand what it is that Panter wants to say with this very artistic work—but it is certainly intriguing.”

Well, I don’t intend to elaborate too much on that, but let’s begin with saying that Jimbo in Purgatory is a great looking book—a trifle on the large size perhaps, but a great looking hardback nonetheless, with gold leaf emboss on a red cover. As for what lies beneath that cover, I confess to never having been a particular fan of Panter’s work, finding his art a little ugly. The story is a loose retelling of Dante’s Divine Comedy but with pop culture trappings, and concludes with Panter’s own best loved vinyl recordings (thirty three thumbnail drawings of album covers, accompanied by brief anecdotes).

I don’t assume many people will come to this for its story. Panter fans, collectors of comic book marginalia and Devil art historians will dig it, though.