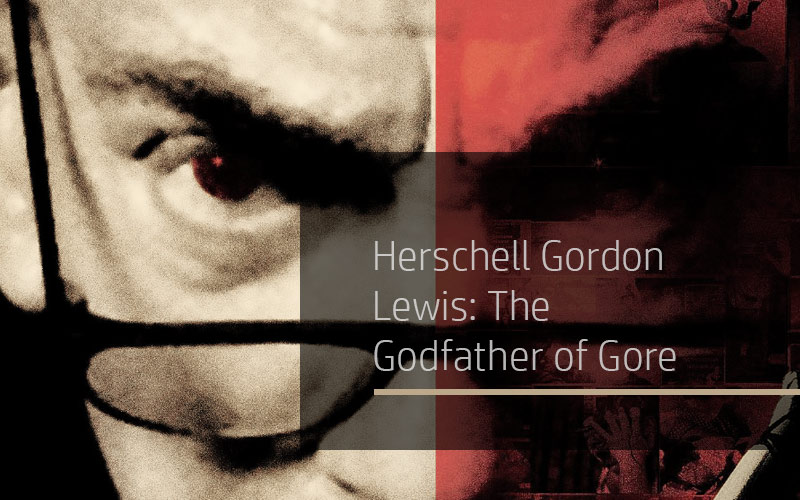 Herschell Gordon Lewis is a filmmaker I was a fan of for years before I ever got the chance to see a single frame from one of his films. That might sound like a strange, almost naive, statement to make, but then I’ve read interviews with some great musicians who, in those primitive but more magically tactile days of pre-internet and instant downloads, became fans of bands based purely on seeing photos of them in the rock press, so maybe it’s not such a rare phenomenon. Of course, we often chase down movies, or books, or records, based purely on the poster or cover art, or reading about it, or word of mouth, but that’s different from becoming an actual ‘fan’ or admirer, of having a gut instinct that a certain artists’ work is bound to connect strongly with you.

After reading about his movies in early issues of Fangoria magazine, I finally got to see my first Lewis film in the mid-eighties, when his first two pioneering gore epics Blood Feast and 2000 Maniacs were released on VHS in Australia, on the much loved Palace Explosive label. Later, I started trading videos by mail and eagerly devoured often-atrocious quality dubs of other films in the Lewis oeuvre, happy in my discovery that his work was everything I imagined it to be, and more. Yes, his films were technically primitive and contained some of the most stilted non-acting you’ll ever see in the exploitation genre, yet it is precisely this roughness which gives Lewis’ films their unique aesthetic edge. They can be very disturbing if you let them, are so artless they develop a uniquely identifiable art form unto themselves, and with the passing of time have also become documentaries of the era in which they were produced, capturing fashions, decor and architecture exactly as they were at the moment (no time or money for production design and wardrobe on a Lewis production—what you saw is what you got).

Co-directed by Frank Henenlotter (whose 1982 debut feature Basket Case was dedicated to Lewis) and early video entrepreneur Jimmy Maslon, Herschell Gordon Lewis: The Godfather of Gore is a great feature-length documentary which examines the career of this maverick filmmaker, whose work—in the best roadshow and carnival tradition—was proudly driven solely by the pursuit of a buck and in over little more than a decade (from 1960–1972) traversed such genres as nudie cuties, horror, sexploitation, hillbilly potboilers (Moonshine Mountain, This Stuff’ll Kill Ya!), comedy, bikers (She-Devils on Wheels), juvenile delinquency (Just for the Hell of It!), rock & roll (The Blast-Off Girls), blaxploitation (Black Love) and even kids films (Jimmy the Boy Wonder).

Still mentally sharp and physically spry in his early eighties, Lewis is joined on camera by his frequent early collaborator and producer, the late David F. Friedman (who gives us an all-too-quick tour of his amazing collection of film and carnival memorabilia). Also on hand to share their input and recollections are actors Ray Sager, Jerome Eden and Mal Arnold, and cameramen Andy Romanoff, Steve Poster and Daniel Krogh (who co-wrote the classic 1983 book The Amazing Herschell Gordon Lewis and His World of Exploitation Films with John McCarty and died before the documentary was completed). Input is also given from the likes of John Waters and Joe Bob Briggs, critic Kevin Thomas (who condemned Blood Feast in the pages of the LA Times) and cinema usher Roger Christensen (who recalls the surreal experience of seeing Blood Feast being screened in the majestic Movie Palace in Los Angeles).

Highlights throughout the documentary are many, but some of my favourite moments include Lewis and Friedman taking a car ride back to St. Cloud and returning to the Hunter Arms motel (where 2000 Maniacs was filmed), John Waters showing off his prized paperback novelisations of 2000 Maniacs and Moonshine Mountain (he’s still looking for the Blood Feast paperback), and Friedman reflecting on the making of the nudie cuties and the often spartan conditions at some of the nudist camps which they filmed at (including the crew having to strip naked along with the cast at one camp, and another whose ‘swimming pond’ was filled with frogs, snakes and slimy water). Another high point is the recently discovered silent footage from Lewis’ unfinished 1967 opus An Eye for an Eye, which looks like a bizarre sci-fi/experimental film inspired by Roger Corman’s 1963 gem X: The Man with the X-Ray Eyes. It was also nice to see Lewis’ regular leading man, the late Thomas Wood, given some due recognition, and even nicer to discover that he was exactly the type of personality I had always imagined him to be (a pill-popping, chain-smoking womaniser who enjoyed a drink). Newspaper clippings highlight the stir Blood Feast caused when it first opened in 1963, resulting in many prints being confiscated and cinema owners charged with offensive acts.

On the negative side, it would have been nice to have seen interviews with some of the women who worked with Lewis over the years (the closest we get is cheesecake photographer Bunny Yeager, who turned down the role of the mother in Blood Feast, insulted at having been asked to play such a mature role). The Blood Shed, a Grand Guignol-esque cinema which Lewis operated out of Chicago for a brief time in the late-sixties, is also unfairly ignored (though to be fair, no visual documentation of the Blood Shed seems to have survived).

Die-hard Lewis fans will probably find little in Herschell Gordon Lewis: The Godfather of Gore that hasn’t already been covered in the many articles and books about the man which have been published in the past three decades. However, never has all the information been so concisely—and entertainingly—condensed into one piece of work. Something Weird’s DVD release contains some superb supplementary material, including over an hour of outtakes which is almost like another documentary in itself (and includes a look at 1970s Miss Nymphet’s Zap-In, Lewis’ jaw-dropping sexploitation take on TV’s Laugh-In). There are also a number of trailers and a gallery of Lewis promotional material, along with the rare short Hot Nights and the Go-Go Lounge, which Herschell directed (undated, though it appears to be mid-sixties).

Indispensable viewing for anyone with more than a passing interest in the history of exploitation and the breaking of cinema taboos.

Hip Pocket Sleaze: The Lurid World of Vintage Adult Paperbacks by John Harrison charts the rise of sleazy pulp fiction during the 1960s and 1970s and reviews many of the key titles. An informed look at the various genres and markets from this enormously prolific era.

John Harrison is a freelance writer based in Melbourne, whose interests include collecting vintage 8 & 16mm sexploitation loops and educational shorts, which he hopes to eventually archive and release on video and DVD. In his spare time, he runs a small mail-order business called The Graveyard Tramp, which specialises in off-beat items of pop culture memorabilia. In 2003 he curated an exhibition of vintage adult paperback cover art at The Basement Cafe in Melbourne.
Posts by this Author
PrevPreviousOn Joy Devotion
NextWhere Is Mozlandia?Next

Figures in the Landscape: Rituals, Wilderness, and Canadian Cinema
Jennifer Wallis watches Rituals (1977) and explores Canadian wilderness on film in the tax shelter era.
Read More
Ansco Artworks: Lust for Life
Lust for Life, a 1956 biopic of artist Vincent Van Gogh, was shot on redundant film stock at director...
Read More
Crikey Moses! A Quick Look at the Making of The Ten Commandments (1956)
One special effect would dominate the film — the parting of the Red Sea. Julian Upton crosses Cecil B....
Read More
Offbeat Podcast
To coincide with the launch of the revised and updated Offbeat, a series of podcasts relating to the...
Read More
Last Night in Soho: In some ways surprising
Morgan Jones looks at Last Night in Soho to find a clumsy but unabashedly enjoyable psychedelic horror...
Read More
Carrying on in the country house: Andrew Sinclair’s Blue Blood
JENNIFER WALLIS on Andrew Sinclair’s 1973 film, Blue Blood, its real-life and fictional inspirations,...
Read More
“I ended up being in two of their films that night”
What is a custom movie? David Kerekes looks at Mail Order Murder: the Story of W.A.V.E. Productions and...
Read More
Fear Street: Part Three – 1666
In the final instalment of her Fear Street review trilogy, Lakkaya Palmer considers the history lessons...
Read More
Fear Street: Part Two – 1978
In her second blog on Netflix’s Fear Street trilogy, Lakkaya Palmer reviews the 1978 instalment, where...
Read More
Fear Street: Part One – 1994
It’s made a bloody splash on Netflix this July, but is the Fear Street trilogy just for kids? Lakkaya...
Read More