A critical look at the Netflix documentary series, Don’t F**k With Cats, which has earned both praise and opprobrium for its exploration of the case of Luka Magnotta.

People kept telling me to watch Don’t F**k With Cats. But to be honest, I’m sick to the back teeth of hearing about Magnotta. When your husband writes about the history of snuff films, you can’t avoid this kind of stuff (though I hasten to add we rarely spend evenings watching splatter flicks with a bottle of red). The period leading up to Magnotta’s arrest was a somewhat surreal one. I’d always suspected that a market for animal torture videos probably did, regrettably, exist, but became painfully aware of this fact when David (Kerekes) was working on the updates to Killing for Culture (a book originally written before the advent of the internet) and we came into contact with some of the people involved in the hunt for Magnotta. By the time news of the murder of Lin Jun broke, the snuff film had decidedly shifted from cultural myth to horrific reality. 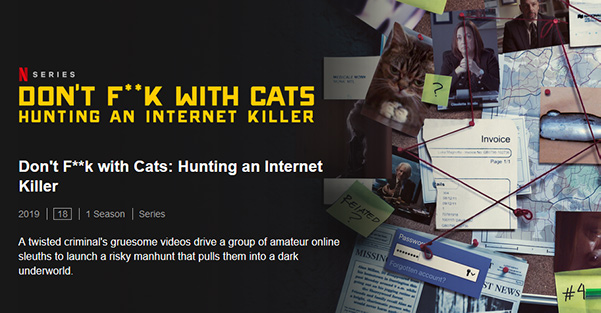 Viewers of Don’t F**k With Cats will be familiar with the basic story. In 2010 a Facebook group, For Great Justice, was created in response to the appearance of an animal torture video posted to YouTube, 1 Boy 2 Kittens. Group members — totalling 3,000 within two days of the group’s creation — scrutinized the video for clues to the location and identity of the man in the video. He was swiftly identified as Luka Magnotta from Canada. Don’t F**k With Cats presents the search for Magnotta as one spearheaded by a few everyday American heroes, but the search spanned a much wider area and cast of characters. UK-based Alex DeLarge (a pseudonym) was one of the original members of For Great Justice, but soon joined offshoot group the Animal Beta Project. This smaller group dealt with the huge amount of information being submitted to For Great Justice:

“Basically ABP was somewhere for the admins to take all the data that was coming in. You can imagine you’ve got 1,000 people very passionately Googling the shit out of a name, you’ve got a lot of data coming through, and Magnotta’s case was massive. The admins feed all the data through and realize you can only say so much in a public forum, so they set up ABP, a core group of about fifteen people of which I am one. … Essentially every day we Google, search and collect data, bearing in mind we are five years behind Magnotta and he’s putting up ten new profiles a day.”

Some of those profiles could be found within For Great Justice itself.

“I learned very quickly that Magnotta had in fact been in the Facebook group many times. There is only so much research you can do into a fake Facebook profile, so policy was to accept all requests. If it was found to be him, kick him out, or sometimes engage him to see if we could get new info. Or tell him to get help.”

When, in May 2012, a video entitled 1 Lunatic 1 Ice Pick appeared on shock sites Bestgore and theYNC, DeLarge and others in the group had the feeling that their worst fears were about to be realised: Had Magnotta moved from the torture and killing of animals to the torture and murder of a person? The video depicting the corpse of the man who would later be identified as Lin Jun had a title, the addition of a musical soundtrack, and had been edited in a rudimentary fashion. Like Magnotta’s animal torture videos, it was a product intended for an audience. DeLarge said:

“There was life before that video and now I am living with life after that video. I held my hand over the screen and [initially] could not watch. [Another group member] was doing the same in America. We were communicating via Facebook in real-time. I typed messages like ‘I CANNOT WATCH THIS SHIT.’ We decided to Skype so we could talk to each other as we watched it. We were blown away like you would not believe. I said I really don’t wanna watch it. He said ‘We have to determine if it is his [Magnotta’s] face in the video.’”

A day later Bestgore posted an article confirming that, yes, it was Magnotta. Despite the authorities being informed, the video was dismissed by police as a hoax until several days later and certain ‘real’ events that were impossible to ignore: a severed foot was mailed to the Canadian Conservative party offices, and a hand to the Liberal party; a suitcase containing a human torso was found in Montreal. On top of this, Magnotta had fled the country.

As the case developed, 1 Lunatic 1 Ice Pick seemed to become a perverse holy grail for many internet users, confirmed gore-hounds or otherwise. When Magnotta was finally arrested in a Berlin internet café in June, he was reading news stories about himself.

In Killing for Culture, David Kerekes and David Slater note:

‘The creation of disagreeable animal cruelty videos illuminated a path for Magnotta. He saw how the videos thrust him incorrigibly to the centre of attention; the fact that the attention was one of condemnation and universal hatred didn’t really matter to him.’

Vlogger Sarah Hawkinson, in I watched Don’t F With Cats so you don’t have to, offers an astute analysis of the Netflix series: by its very existence it perpetuates the romanticisation of violence and murder that it purports to be railing against. One can hardly doubt that it also feeds the narcissistic personality of Magnotta.

Sarah Hawkinson, I watched Don’t F With Cats so you don’t have to

The series has an unusually casual approach to its subject matter that, for me, belies a lack of concern for either its cast or its audience. As Hawkinson notes, if you don’t know what the series is about (indeed even if you do), much of the footage will come as a shock, especially given the seemingly light-hearted title. It includes many of the animal torture videos themselves — albeit cut before the moment of death — and images of the dead bodies. The spectacle of death – or death-by-proxy – is offered up to the viewer again and again. At one point the filmmakers have one of their interviewees, online sleuth Deanna Thompson, watch both the animal torture videos and 1 Lunatic 1 Ice Pick in order to film her reactions.

The reaction video is, as Killing for Culture explores at length, an internet phenomenon bound up with ‘extreme’ content such as the coprophagic 2 Girls 1 Cup or pre-Magnotta snuff like 3 Guys 1 Hammer. Whether the makers of Don’t F**k With Cats intended it or not, the footage of Thompson sobbing as she watches the Magnotta videos fits seamlessly into a genre that simultaneously condemns and aggrandizes the ‘unwatchable’ content on offer. The overall effect is to place the viewer in an uncannily similar position to the Bestgore audience, both appalled and thrilled by the spectacle before them. If you’re okay with that, then that’s your shout, but the marketing of Don’t F**k With Cats bothers me, from the clickbait-y title to the Netflix page containing an image that suggests LOLCats more than it does animal torture and murder. I was left wondering what the viewer was supposed to gain from seeing clips from the torture videos, or from watching Thompson’s clearly traumatized reaction, other than the sense that — like Magnotta’s viewers — we too were watching the unwatchable.

Related Posts
It’s made a bloody splash on Netflix this July, but is the Fear Street trilogy just for kids? Lakkaya...
Read More
In the summer of 2018, Clint Carrick drove across the US visiting unremarkable skateparks in unremarkable...
Read More
Jennifer Wallis reviews Network’s newly-restored DVD release of Just Like a Woman (1966), and enters...
Read More
In this archive interview, Julian Butler talks about the pitfalls of leaping from no-budget filmmaking...
Read More
In her second blog on mothers in horror, LAKKAYA PALMER considers involuntary motherhood in Rosemary’s...
Read More
The Stark Reality...Discovers the Hoagy Carmichael Music Shop is without doubt one of the strangest records...
Read More
Jennifer Wallis reviews Network’s newly-remastered release of Brian Desmond Hurst’s Behind the Mask (1958),...
Read More
Tasteless or underrated? Jennifer Wallis makes the case in support of Michael Winner’s supernatural horror...
Read More
Part 2 of our interview with A THRILLER in Every Corner author Martin Marshall. The darker side of the...
Read More
MARTIN MARSHALL’s recent book, A THRILLER in Every Corner, is a meticulously researched valentine to...
Read More
PrevPreviousHex – A Book Review
NextThe Orchard End Murder and the Last of the Short FilmsNext