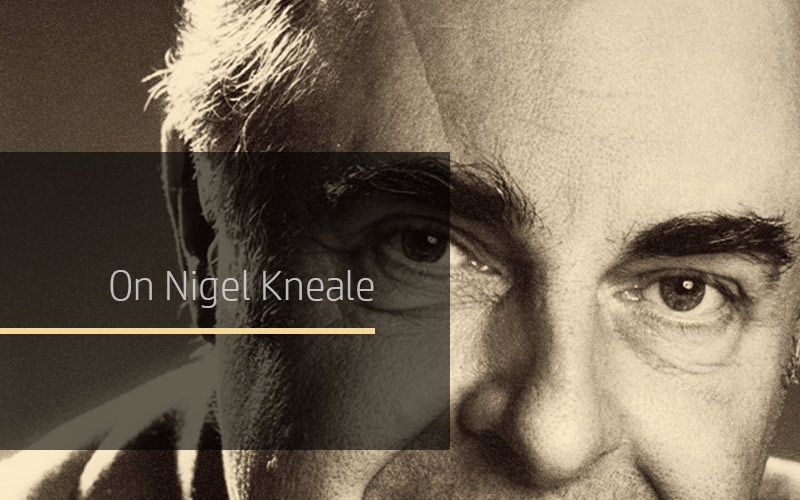 Andy Murray is the author of Into The Unknown The Fantastic Life of Nigel Kneale (Revised Updated). Here he talks about working with the man who invented modern television.

HEADPRESS: When did you first get the idea to write a book on Nigel Kneale and how did the opportunity to meet him come about?

ANDY MURRAY: Long story! Back in 2000 I was working at Cornerhouse arts centre in Manchester. We’d had some success with special Halloween screenings, notably the opening night of The Blair Witch Project in October 1999. I was, and still am, a fan of the particular eerie strand of British film and TV that’s since been dubbed ‘folk horror’ I suggested that we start up annual Hallowe’en showings of that kind of material at Cornerhouse, under the banner Darkness Over Britain. It was a big success. The very first screening we did, of Kneale’s The Stone Tape (introduced by Ramsey Campbell), sold out completely.

I have fond memories of some of those Darkness Over Britain events at the Cornerhouse. Can you give us a little background on how easy or difficult it was to source this material back then? Did you meet any resistance?

Actually there was a lot of enthusiasm within Cornerhouse for showing TV material, as that was something it was always meant to be doing but rarely did. And it was then still part of the BFI’s chain of regional film theatres (RFTs), so there was a very efficient procedure in place for sourcing and screening TV material with the rights fully cleared.

Really, the main issue was whether or not the material was ‘rare’ enough to merit a public screening. All kinds of TV stuff was being released on DVD at the time, and it was always more interesting to show things that you couldn’t just buy and watch in private. That was changing all the time. Darkness Over Britain ran for nine years in all, and now I think its’s possible to recreate every screening we did in the comfort of your own home by buying official DVD/Blu-ray releases!

I’m guessing you approached Nigel Kneale for an appearance at one of the events?

It was a natural step to ask Kneale along as a guest for the second year. I love his work and it fitted in to what we wanted to do exactly. When we first rang to invite him, his first reaction was to be surprised that someone was ringing to speak to him, rather than his wife [the writer Judith Kerr]!

His health wasn’t great by then — he was fast approaching eighty — and at one point it looked as though he wouldn’t be able to make it. But in the end he did, thanks to the support of his friend, the academic Julian Petley, who we’d invited to chair the screening. We showed two episodes from Beasts (What Big Eyes and During Barty’s Party) and the Hammer film version of Quatermass and the Pit, followed by an onstage Q&A.

Kneale told such wonderful stories about his career — not surprising, really, I suppose, as he’d been telling stories for a living for most of his life. I felt honoured to have met him, and after the event, I started to wish that somebody would get all of his stories down in the form of a book. I’d started freelance writing myself by that point, just about, so eventually I thought: well, why don’t I try and do it myself?

What was the process of writing a book on Nigel Kneale like?

Well — arduous! By reputation Kneale could be difficult to deal with, but I have to say that, for the most part, he was very kind, courteous and helpful. He had his moments, yes, but in all they were few and far between. I interviewed him for many hours on end, mostly over the phone, but also over the course of several visits to his home in London. When I visited him, he gave me access to his script archive — that’s to say, the workroom at the top of his house which he couldn’t get up to any more, which contained his old scripts, his typewriter and the Martian he’d kept from the BBC Quatermass and the Pit. It was the room in which he’d have written all of his work from the end of the fifties onwards. Just being in there was enough to make you want to pinch yourself.

The arduous bit was that I’d set myself a huge task, telling the story of his life and all of his work — including the many scripts he’d written which hadn’t been produced. It was a hell of a lot of research and a lot of material to fit in to one book. I wanted to do Kneale proud, and I’d like to think that the new edition does a better job of that.

What can readers expect to find in the new edition that wasn’t in the earlier one?

The whole thing has been spruced up, tweaked and expanded. It’s almost 50% longer, all told. I think there’s a decent extra layer of information and detail to the story now, plus things like an index and a filmography which readers had mentioned that they wanted.

Also there’s a whole new final chapter to bring the story up to date. Most obviously and sadly, Kneale himself has died since the first edition was published. But there’s also been a lot of activity around him and his work in the years since so I was glad to be able to cover that. Now you can find out what his first ever television credit was, which didn’t even happen in the UK; why Quatermass is now closer than ever to coming back to TV, and what false starts have happened along the way. And perhaps my favourite: you can find out what happened when Kneale met Richard O’Brien in the green room at a convention.

A prolific writer and critic with a particular interest in cult British film and television, Andy Murray programmed the annual Darkness Over Britain screenings at Manchester’s Cornerhouse and was consultant to the BBC4 documentary The Kneale Tapes. He lectures in Film Journalism at the University of Salford.
Posts by this Author