Menu
£13.99 Basket
View basket “Creeping Flesh 1” has been added to your basket. 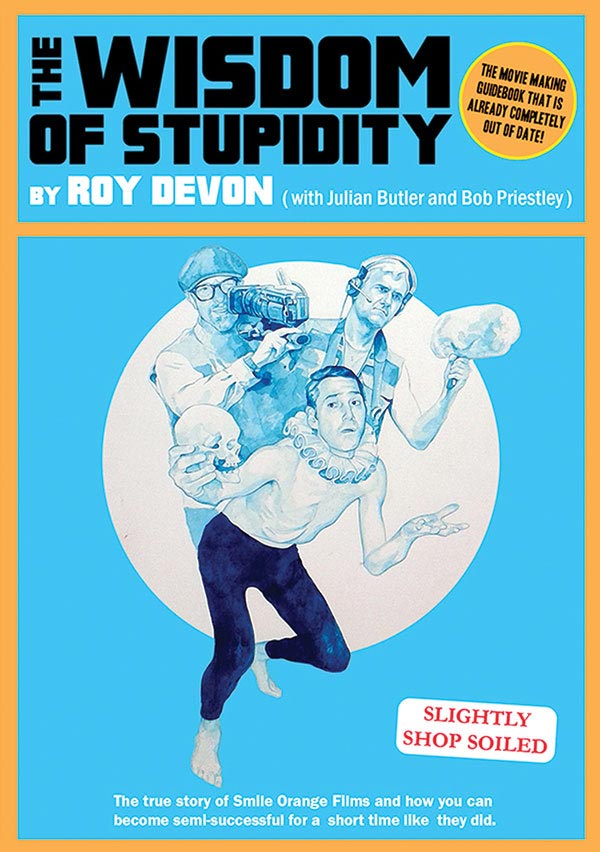 The true story of Smile Orange Films and how you can become semisuccessful for a short time like they did.

An introduction to the art of filmmaking for you, the budding filmmaker. It is also the very funny story of Smile Orange and VHS British filmmaking.

The Wisdom of Stupidity is an introduction to the art of filmmaking for you, the filmmaker.

Successful chick-lit author and TT journalist Roy Devon leads you through the videographic process, using the life and work of Smile Orange Films (Fatliners, I’llkillya!, The Hunt for the Yorkshire Grimace, Channel 4’s Focus North), as a case study. Devon tracks down the legendary masters of celluloid (cathode ray and Hi8) and, with their guidance, learns how to gain wisdom through stupidity.

In the process, you are given an original insight into the pre-YouTube British filmmaking scene of the 1990s, a time when the increased availability of camcorders meant that anybody could make a feature film, advertise it in a fanzine and sell it to fans around the world.

Smile Orange Films, from humble beginnings, soon became hot property. Their head-spinning journey through DIY filmmaking led eventually to the Cannes Film Festival, detailed here. When television came knocking, the jump to stardom was inevitable. Or so they thought.

Avoid the same mistakes. Using jargon-free terminology this book guides you through the filmmaking process. Here you will learn how to get ideas, pitch to a commissioning editor, deal with an unprofessional crew and celebrity strops, shoot on the moors, survive financial collapse and so much more.

Outstanding.Henry Rollins (on I’llkillya!)
Smile Orange make exploitation movies and the beauty of it is they don’t have to answer to anyone.Variety
Oh my god. So funny.Robert Popper (Writer, South Park & Look Around You) (on Focus North)
The Hunt for the Yorkshire Grimace is British film at its best.Martin Coldrick, BBC
Viewers who stumbled on to this series were in for a treat.Radio Times Guide to TV Comedy (on Focus North)

JULIAN BUTLER is a TV and film producer who has worked with The BBC, Channel 4, ITV and Donald Trump. Together with Robert Priestley he produced Channel 4’s comedy show Focus North, and numerous films as Smile Orange.