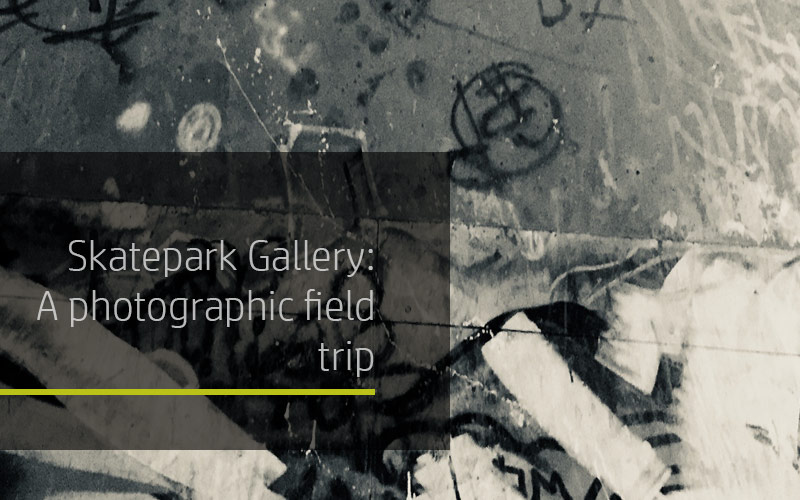 In the summer of 2018, Clint Carrick drove across the US visiting unremarkable skateparks in unremarkable small towns. Along the way he took photographs. 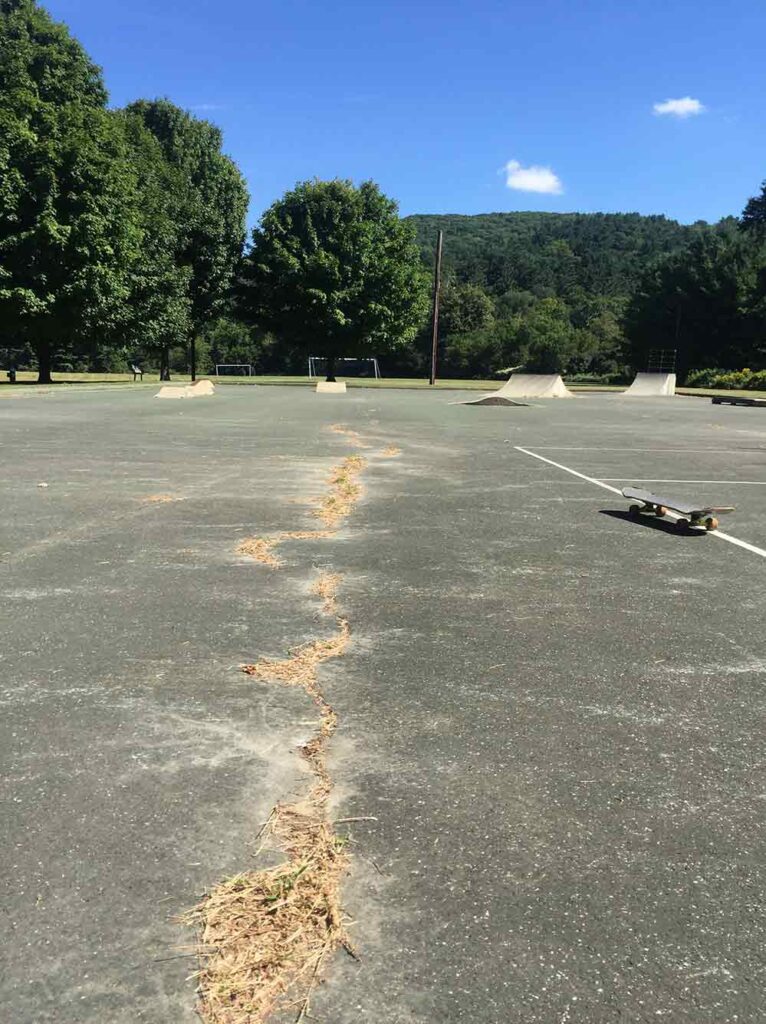 There were once five parallel tennis courts in Stockbridge, Massachusetts. At some point—no one remembers exactly when anymore—the nets came down, the fence was dismantled, the posts removed, and the courts became a skatepark. Blobs of cement were poured at random to create features: a quarterpipe and a spine and a box, a kicker and a roller. The features are scattered haphazardly in one end of the long rectangle of pavement so that there is seemingly no connection between them, and, from afar, the Stockbridge skatepark seems less a place for skateboarding than a site of pagan worship, or perhaps an art installation. This sense is reinforced by the fact that the area of three of the five former tennis courts is still empty, as if the builders ran out of money or patience and said, “This is good enough, don’t you think?” 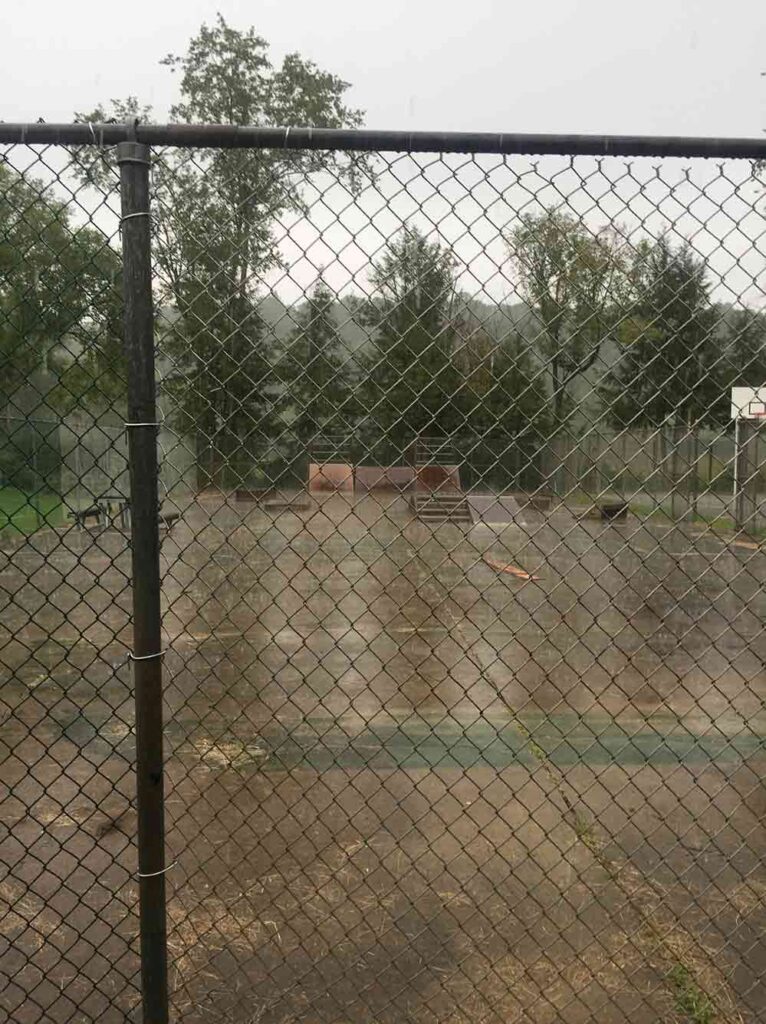 The skatepark in Spencer, West Virginia is comprised of two quarterpipes facing out from the back, two boxes, and a medley of small rails. The conditions suggest years of weather and neglect, but also of love, for it is clear from the grinded paint on the rails and the lanes of faded Skatelite on the quarterpipes that the park receives heavy use. The rain increases to a downpour. I watch the depressions in the park’s pavement turn to puddles. I hope that the storm might pass. It doesn’t, and as I stand under the little pavilion the din of the rain becomes louder and louder until there is a full-blown deluge exploding on the roof and everything around me, and I know that I’m not going to be able to skate Spencer’s park anytime soon. 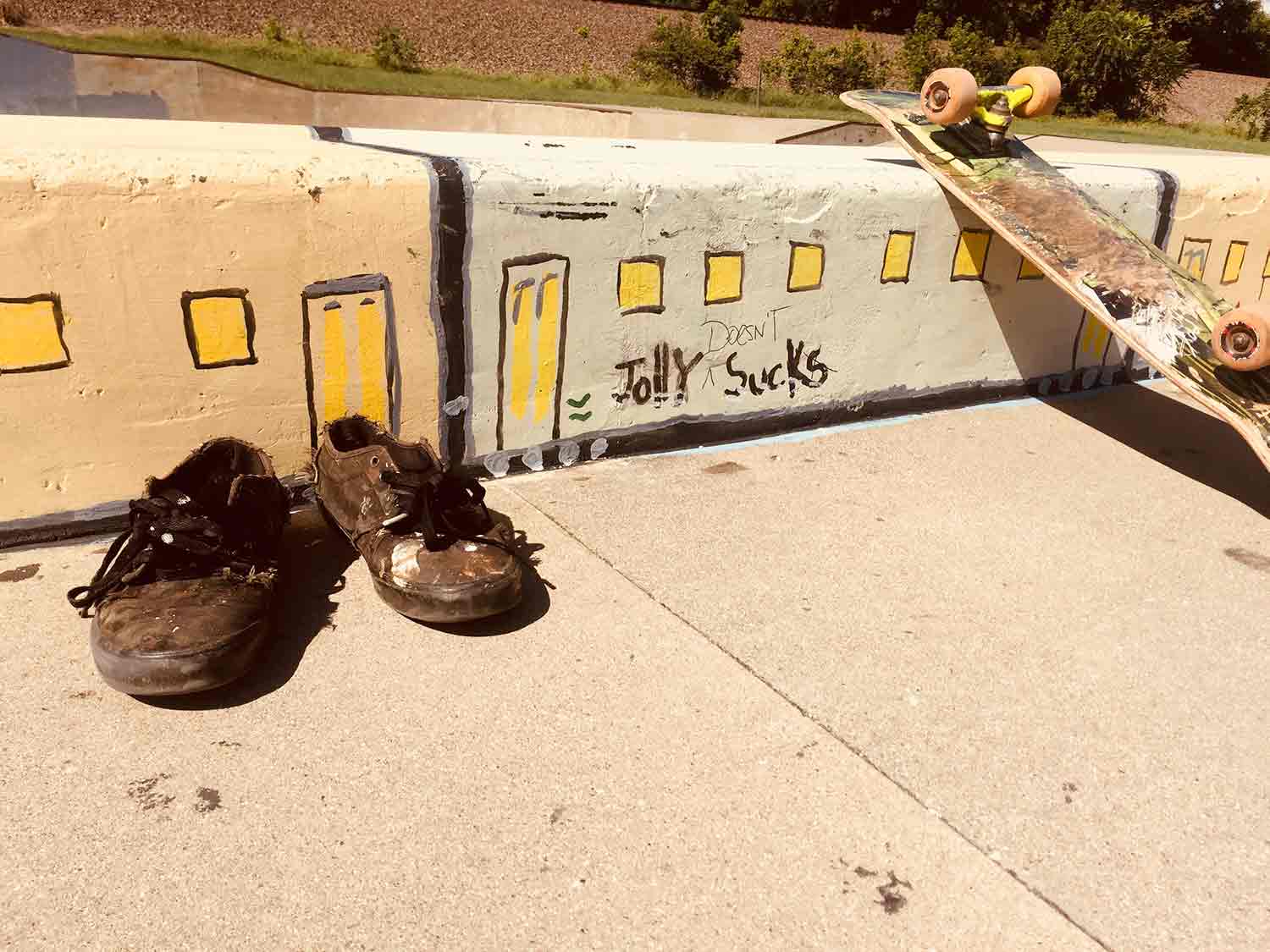 The skate rat kids guard the skatepark as their clubhouse, and they also guard its stories. Ten-year-olds who can’t yet ollie play the Meisters of Westeros: they alone preserve the memory of feats accomplished by former generations, of myths and legends that have been otherwise forgotten. The oral histories are passed down so many times it becomes impossible to know if these distant events actually occurred or are just fairy tales beginning with “It has been told…” Eventually, even the names of the heroes and villains disappear, and the characters become anonymous skateboarders from a long time ago. Then, only the skatepark remains as witness to their lives, and the long days in which children become adults are preserved only in the splintered wood and rusted iron of a quarterpipe, preserved until the skatepark, too, is lost in the wash of time. 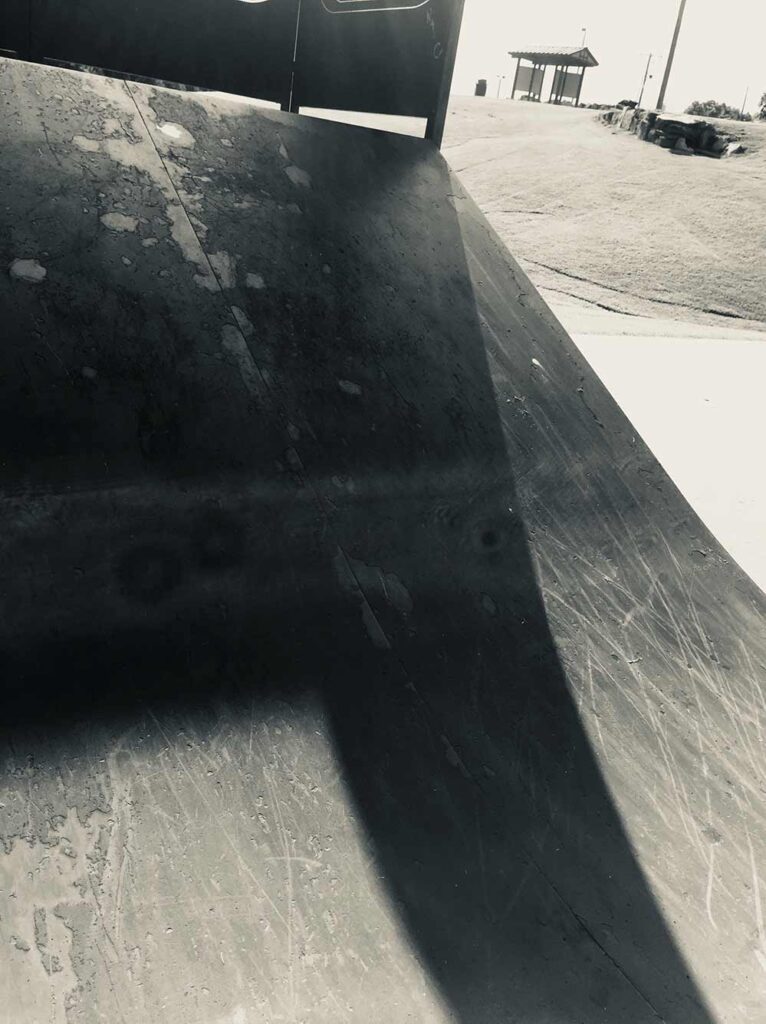 A paved path feeds directly into the park, so when I turn in with speed two teenagers sitting on the deck of a ramp look up from their phone to see who has arrived. They don’t know this person—he’s a scruffy twenty-something in jean shorts and ripped canvas Vans covered in paint—so they stare, trying to gauge how cool he is and how good he is at skateboarding. I put my water jug in a corner and start to skate. The teenagers, it turns out, aren’t shy at all. “Where are you from?” one of them yells. 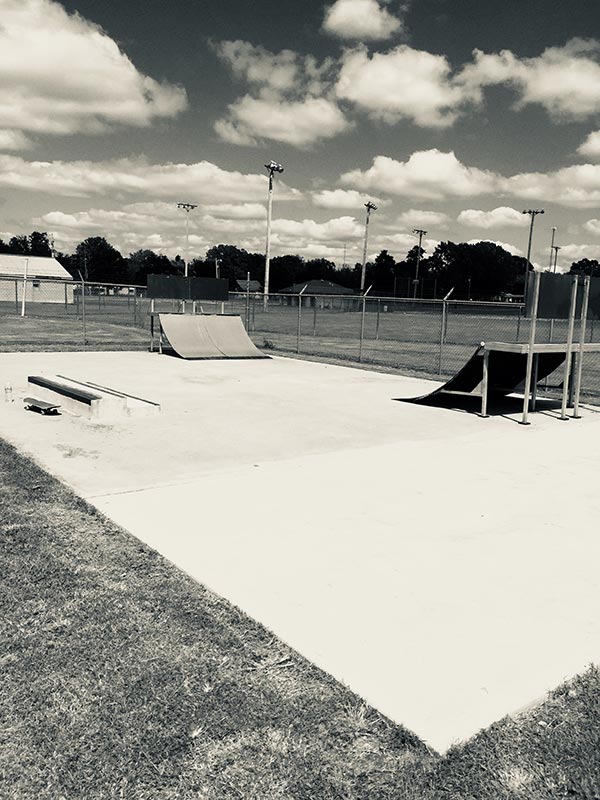 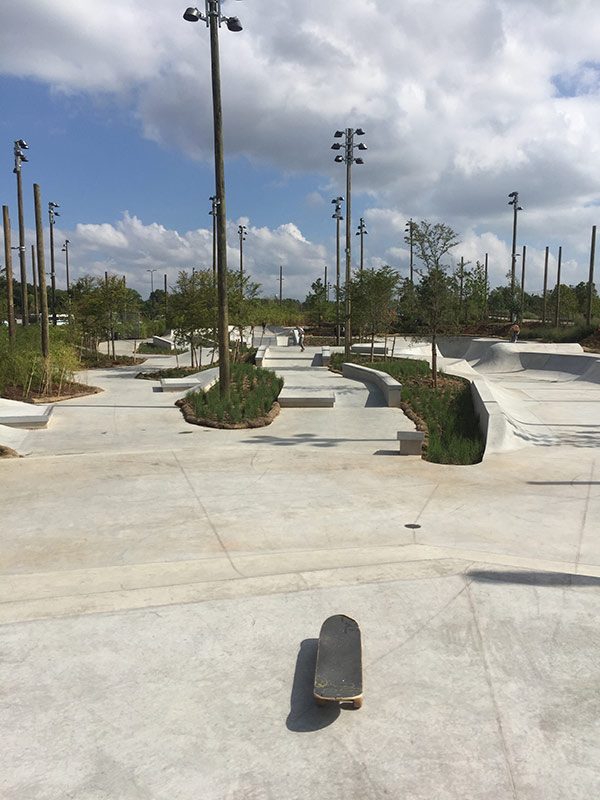 The skatepark is surrounded by baseball fields and soccer fields. It’s the day they get mowed—three guys are out on the fast, rider mowers kicking up plumes of clippings and filling the air with the buzz of engines and the green smell of the earth. Behind the skatepark is a set of train tracks. As I curse in the drone of the coming-and-going mowers a train begins to pass, one of those rusty freighters whose caboose you wait for but never see, its cars keep coming in different colors and sizes with different names painted on their bellies, and eventually you go back to what you were doing and the passing train becomes background noise. I keep trying kickflips in the mechanical clamor of the train and the crescendos of the mowers. No one else is there except the long- gone conductor and the three men mowing the fields.

Three lines branch from a starting point and re-converge at the skatepark’s other end so that the skater flows through a line hitting gaps, ledges, and pyramids linked together instead of left in isolation. It is mid-afternoon. The park is filled with skateboarders and bikers and a couple of kids on scooters. Because the park is brand new, I feel like the local crowd is not yet established and that everyone is a newcomer. No one asks me where I’m from or what I’m doing there; they assume I’m just another Tulsa skater checking out the new spot. I like pretending that I’m a local, as I always do when I’m traveling, and I play along, making general comments to the different skaters as we catch our breath on top of the lines, sweat streaming down our faces. 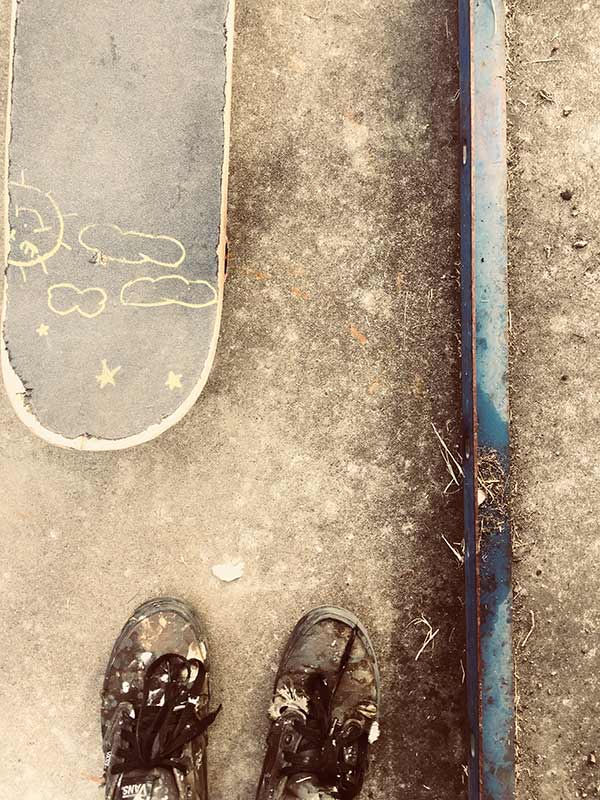 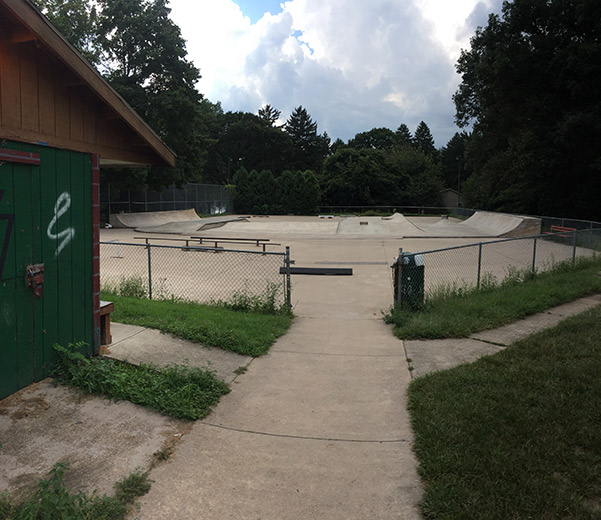 The memory of being fourteen in a 360 flip session surfaces and overlaps with the sensations of reality so that the two filters produce a single image. Suddenly, I remember the high sun above you when you were lying on plywood, the odor of the plywood close against your cheek, your bunched up boxer shorts in a hot pair of jeans, the perspiring wax of a gas station soda cup. My focus comes in waves: at times I pop and spin my board with purpose, as if I intend to land something, and at others I simply go through the motions. I drift further into the trance of the 360 flip, and the rest of the world drifts further away.

I am alone in the park as I begin to make laps. The cement is dry but the sky is all shadowy gray swarms exploding and rolling over one another, and the wind is strong so that branches bend up- wards and the bright white undersides of leaves flicker like strobe lights. It feels good skateboarding. I land kickflips on flat ground, off ledges, from one transition to another. The rails are waxed to a greasy slickness so you only need to creep into boardslides to drift across the metal or bumpy cement. 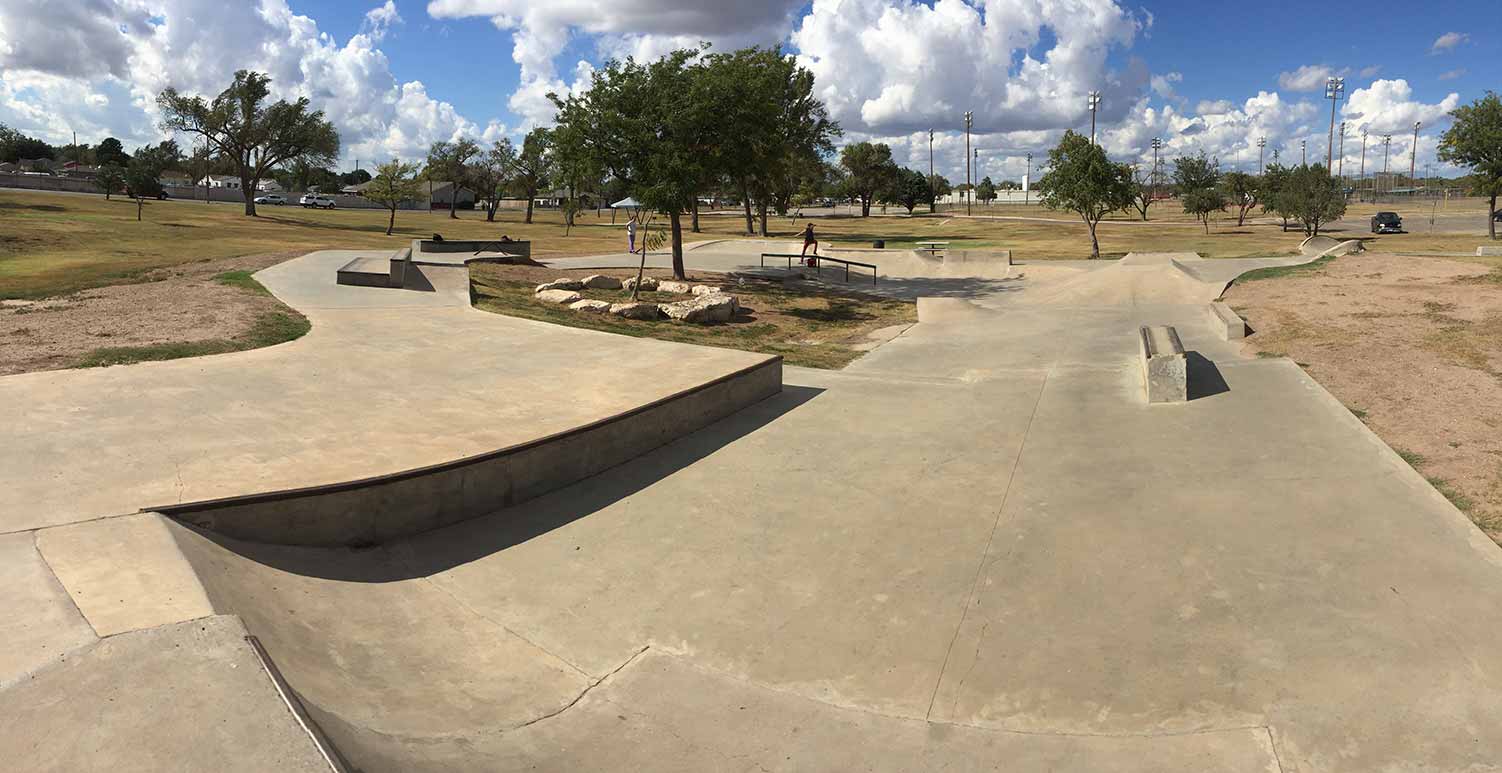 The park is an undulating cement strip bent into a circle so that the perfect skater—Nyjah Huston, perhaps—could skate around forever without stopping. The transitions of the ramps and quarterpipes are quick and the boxes are clunky with fat coping that sticks out over the edges. Pebbles and dust fill the creases and cracks and low points, such as where people skate in and out of the dirt area within the circle, a little patch of desert containing boulders and a gnarled tree with tenuous, fluttering leaves. 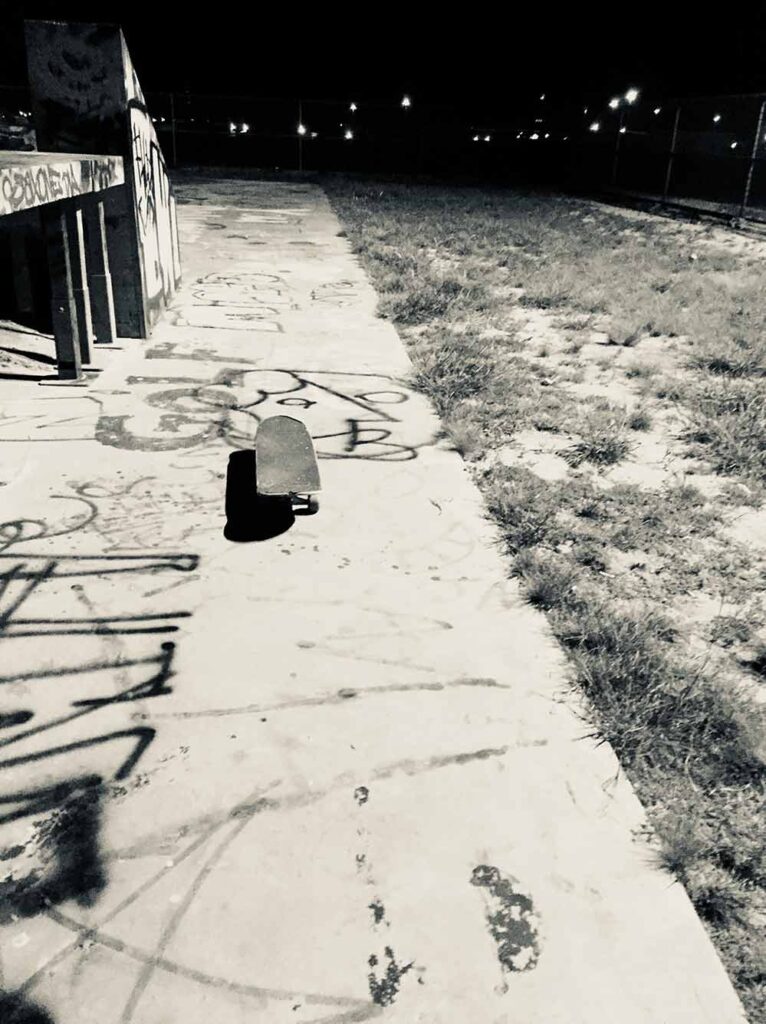 The surrounding environment is sparse and inhuman, but it’s inexplicably beautiful, too. The isolation of the skatepark amid so much emptiness, the floating, faraway stars, the faraway sigh of heavy traffic, the distant headlights and taillights and towering streetlamps, the balmy breeze (tropical compared to the air of Amarillo). The moon in the middle of the huge sky and the first of the emerging stars, no cloud or hill in sight—all of it was beautiful and peaceful in a unique way that stirs poignancy. An excitement bubbles, as it did when Florida-air evenings arrived in Vermont for one week each summer. I roll onto the smooth cement and dive into the light of the skatepark. 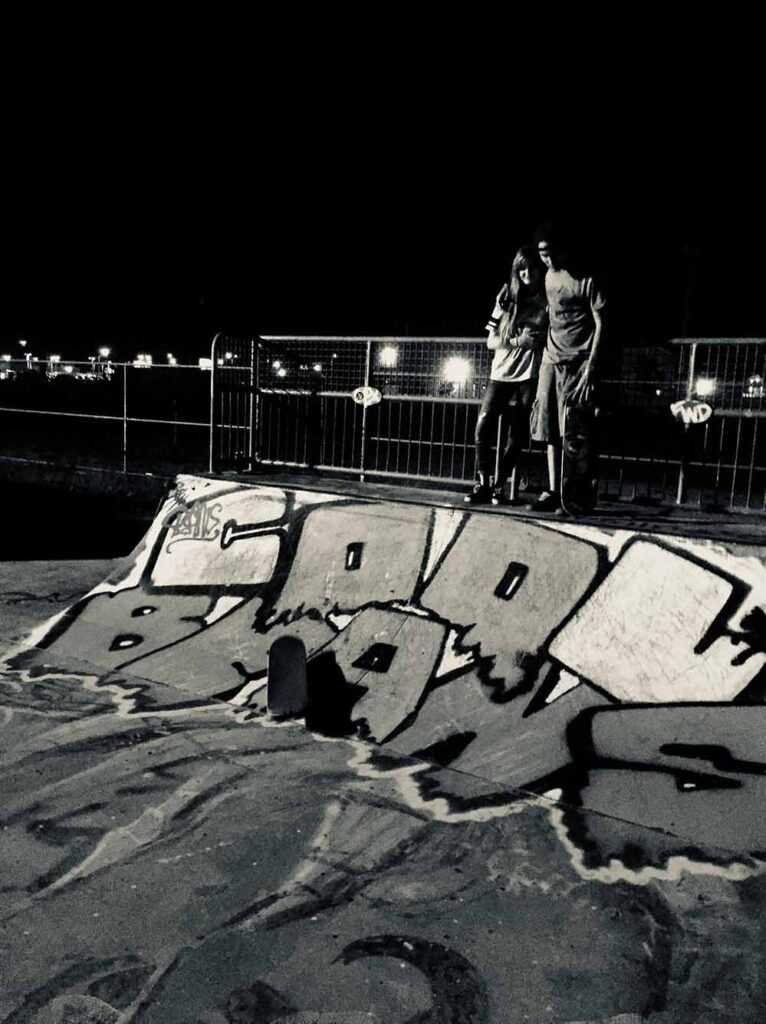 Before they leave, I ask to take a picture. They run up the short quarterpipe. The guy stretches his arms over the railing behind him, and she stands close. At their feet is the skateboard. Half of each face is in shadow, while the other halves are incandescent. Her protruding bangs hide her eyes. His smile is bashful. Later, when I look at the photo, the figures are blurry, and I cannot help but ask: Who are these people? And in what lifetime did I meet them? 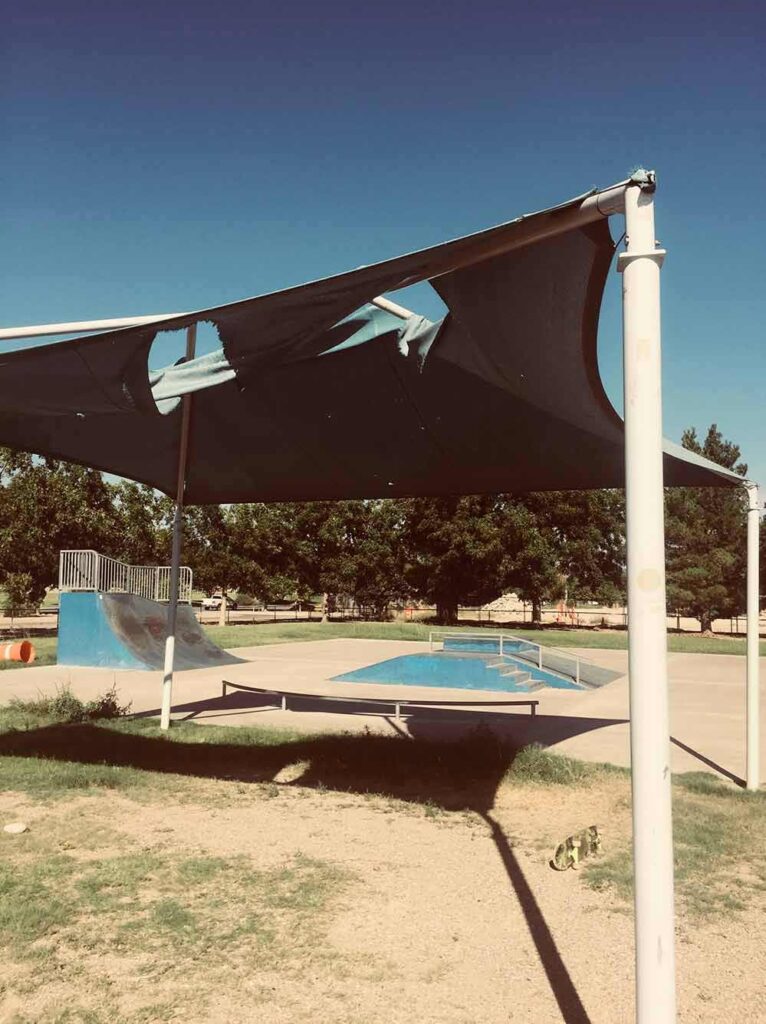 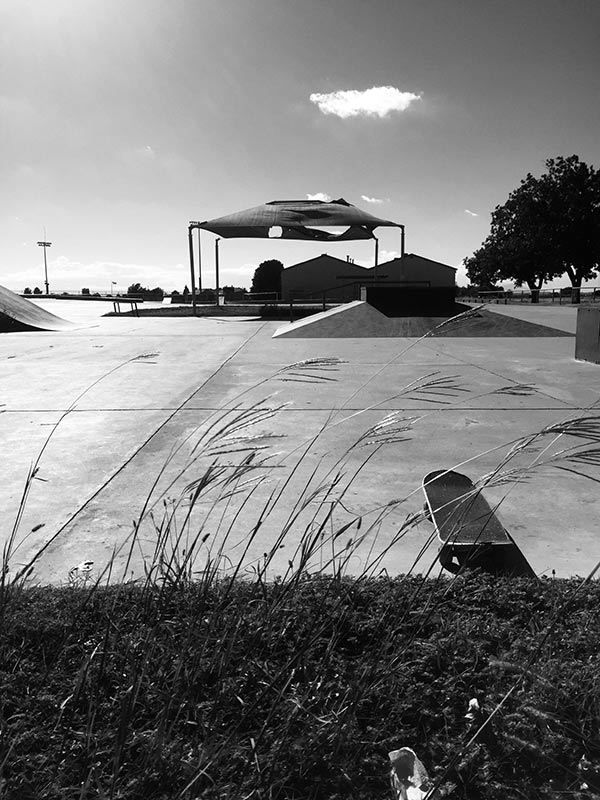 The two separate sections of park meet in strips on either side of a square of dirt reminiscent of a plaza between two buildings. A canvas awning filled with tears and gaping holes stands over the dirt patch; the loose flaps slap and wriggle in the never-ending wind, and patches of bright sunlight dot the square of dirt in abstract puzzle-piece shapes. The Swiss cheese canvas of the awning, the wind and sand, the distant sand plumes and squinted eyes remind one of a set from Mad Max, especially if one is drunk and very much from out of town.

The skatepark in Roswell, New Mexico is surrounded by desert. Wind scours the cement’s surface, and when you catch your breath in between lines, you squint out across the open desert and see plumes of sand swirling above faraway sage brush. You squint the entire time you skate at the skatepark in Roswell, New Mexico, and you always gaze out into the distance, squinting, and you never laugh or talk quickly or excitedly, so you begin to feel like a Clint Eastwood character the more you skate there. 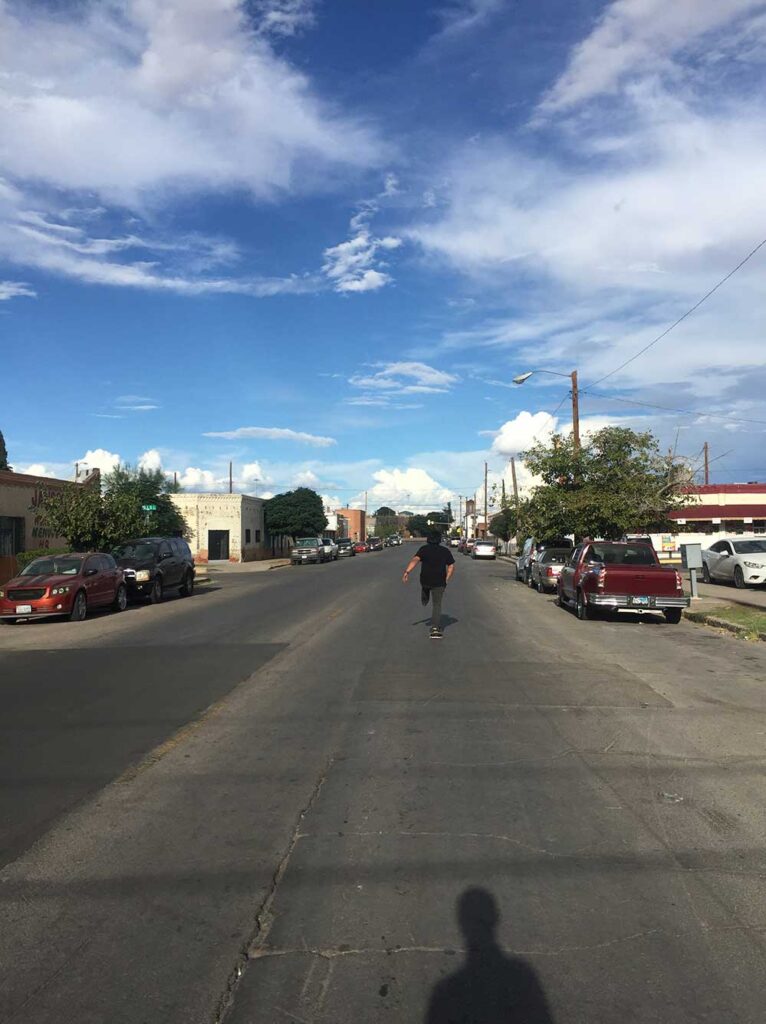 “But the Segundo Barrio skatepark is more than enough. It’s a place for young people to escape their families and be together on their own, yelling when they keep trying the same trick over and over without landing it, sitting on the ramps watching someone skating in the sun, gossiping, debating, laugh ing. It’s a space where you see the same faces day after day, where it’s hard to skate without talking to the others skating around you. For them, it’s a space for growing up. 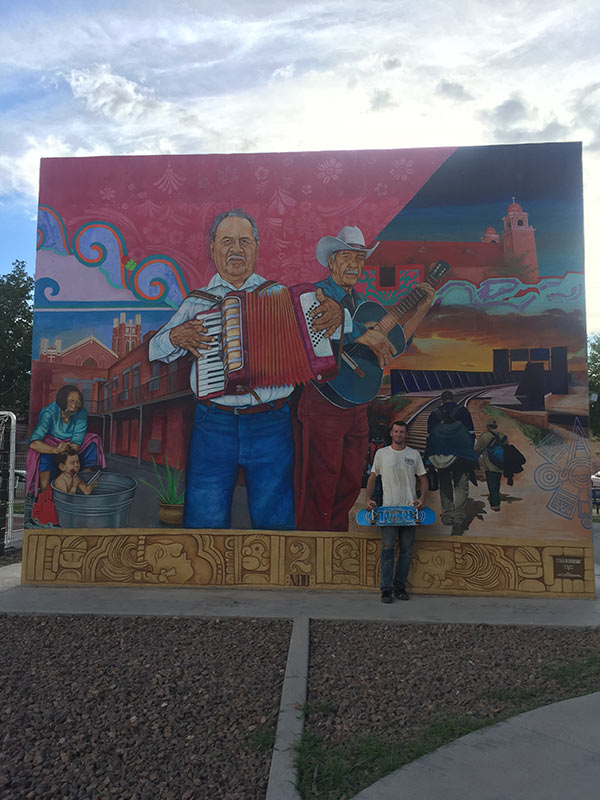 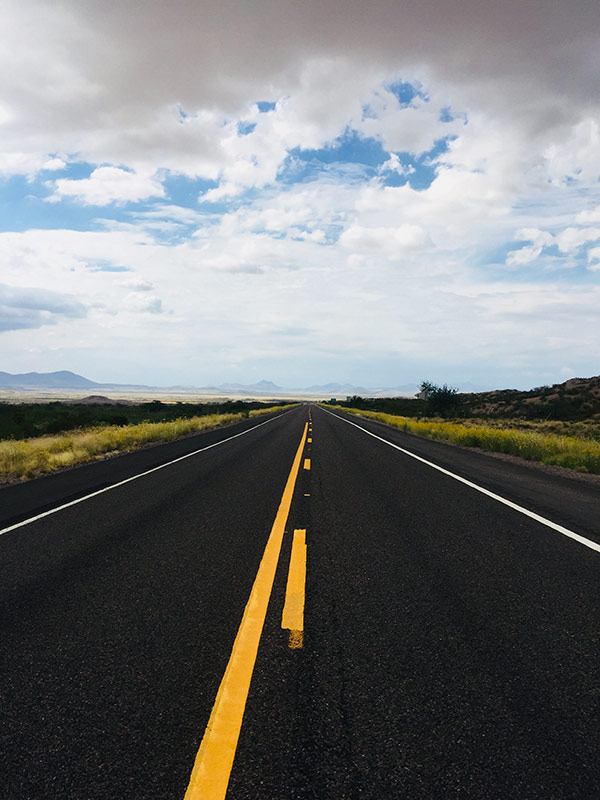 He’s probably self-conscious about playing the Mexican posing with the Mexican-pride mural. I feel guilty when I realize I’d embarrassed him, so I give him my phone and go stand with my back against the wall instead.

I’m driving west towards Oklahoma City across empty plains when the feeling of home that had so hastily been constructed falls apart, collapsing in a cloud of dust. I am again filled with the sweet melancholy of the road, and I think over and over: nothing gold can stay, nothing gold can stay.

Clint Carrick is a writer, house painter, and skateboarder. He lives in Burlington, Vermont.
Posts by this Author