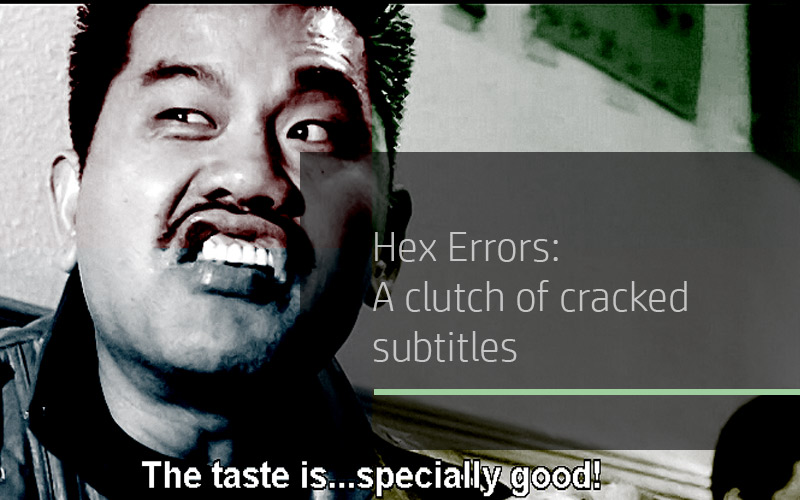 Hong Kong films were typically subtitled in both Chinese and English, often very quickly. Multiple gaﬀes are the inevitable result. Stefan Hammond has quite the collection.

By tradition, Hong Kong films were typically subtitled in both Chinese and English in on-screen prints and on VHS. This has changed as optical discs usually oﬀer various options for subtitles. Translating Chinese into English isn’t simple, and multiple gaﬀes are the inevitable result. Especially when you are translating at the breakneck pace demanded by cost-conscious HK producers.  This splintering of the Queen’s English adds additional—if unintended— entertainment value for those of us who don’t understand the Cantoflow flying by. More Sex, Better Zen, Faster Bullets collects our favourite “hex errors,” divided into categories, and sprinkled throughout the book.

These cracked subtitles have created their own ecosystem, which has included, over the years, phony (overly long and unfunny) subtitles. In late 1998, the New York Times printed a list of purported Chinese translations of Hollywood movie titles. The “translations” came from a humour site and were fake fake fake.

Every Hex Error in More Sex, Better Zen, Faster Bullets appeared in a Hong Kong film and is reproduced with its original punctuation and (mis)spellings intact. Filmmakers make a greater eﬀort nowadays, but many fans love the old-school cracked subtitles. Original punctuation, capitalization and spelling has been preserved, as has the title of the relevant film. To do otherwise would be cheating. Below is just a small sampling.

Battle Of The Sexes

“I know it, he’s not an idiot, he’s sexual detour”
—Black Panther Warriors

“Don’t shout. Balls are not broken yet.”
“Yeah? My iron balls are like marshmallows now!”
—Devil Cat

“Catherine is a nasbian!”
—Passionate Killing in the Dream

“I’ll jelled if you ask me out”
—Ghostly Love

A Pox On Thee!

“I promise to punch you less than before”
—Give and Take…Oh! Shit!

“You mis-shaped my busts, beat it!”
—Street Angels

“But you, you’re stink”
—Ghost Story ‘Godmother of Mongkok’ 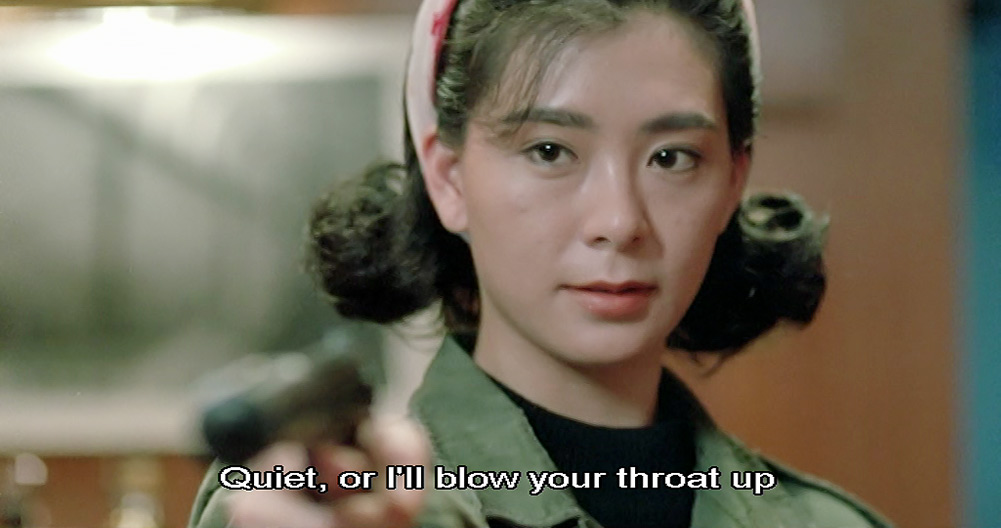 “You know I always like little-snaking women.”
—The Fruit is Swelling

“I am now going to whore in the coﬀee shop.”
—Troublesome Night 4

“I know you, Tony is the nasty bad egg of Japanese triad society!”
—Once Upon A Time In Triad Society

“We are progressive rascals. We are making an art film.”
—Mahjong Dragon

“Is this your territory?”
“Yes, this is called Street of Copyright Infringement.”
—Suicide

Stefan Hammond is co-author (with Mike Wilkins) of Sex and Zen & A Bullet in The Head, and author of Hollywood East: Hong Kong Films and the People Who Make Them. He lives in Hong Kong.
Posts by this Author
PrevPreviousEerie Tales and Unsettling Stories: A Personal History of Teen Horror Fiction
NextAfterword – Goodbye, Joel M ReedNext

Teresa’s Records
Gangsters seek refuge and lose themselves in Cul-de-sac, a 1966 film by Roman Polanski. But what is on...
Read More
Offbeat Bingo
A list of films discussed in the recent Offbeat online panel event, handily crafted so you can mark them...
Read More
Ansco Artworks: Lust for Life
Lust for Life, a 1956 biopic of artist Vincent Van Gogh, was shot on redundant film stock at director...
Read More
Crikey Moses! A Quick Look at the Making of The Ten Commandments (1956)
One special effect would dominate the film — the parting of the Red Sea. Julian Upton crosses Cecil B....
Read More
My Bones and My Flute: Remembering Edgar Mittelholzer
David Kerekes explores childhood and two novels by Edgar Mittelholzer, My Bones and My Flute and The...
Read More
Announcing Oil On Water Press
Headpress is proud to announce the launch of OIL ON WATER PRESS, a new book imprint devoted to true-life...
Read More
Dangerous Encounters: The Horror Film Fanzine as a Subversive Art
A single staple is the most primitive of zine bindings. Find out why Colton Cobb's Dangerous Encounters...
Read More
New Year, New You: 100 ways to improve your life
From fun with mould to making it Halloween all year round, Wallis and Wilson offer you 100 ways to almost...
Read More
Last Night in Soho: In some ways surprising
Morgan Jones looks at Last Night in Soho to find a clumsy but unabashedly enjoyable psychedelic horror...
Read More
Carrying on in the country house: Andrew Sinclair’s Blue Blood
JENNIFER WALLIS on Andrew Sinclair’s 1973 film, Blue Blood, its real-life and fictional inspirations,...
Read More