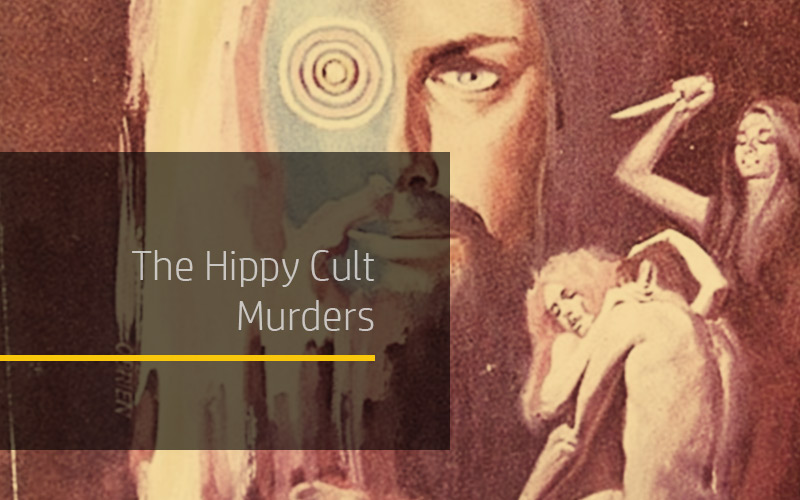 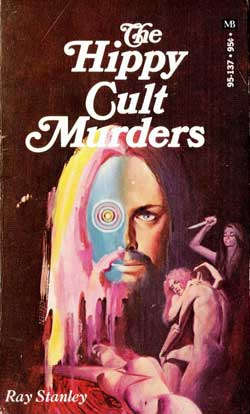 ‘He was a saint to a “family” of potheads. And he led them on a freaked-out sex-and-blood bath that picked up where the brutal Sharon Tate killings left off.’

As it does with just about any moment when pop-culture meets sudden tragedy, one of the aspects of the 1969 Tate/LaBianca murders that most fascinates me is the way in which the case was portrayed – in either a quasi-factual or purely exploitational way—by the lowball media. From skid row film producers to sleazy underground paperback publishers, the sensational aspects of the savage killings committed by members of the Manson Family—from its celebrity victims and the shattering of the ‘peace and love’ illusion to the LSD orgies and charisma of the Family’s leader, Charles Manson—were a potent melting pot of ingredients ripe for exploitation. Low-budget movies like The Love-Thrill Murders (1971), I Drink Your Blood (1971) and The Deathmaster (1972) were clearly inspired by the Manson case and kept audiences in grindhouses and drive-ins entertained with lurid tales of violent, doped-up hippies on a murderous rampage.

The mass-market paperback industry also gladly fed the fear and paranoia which was being whipped-up amongst not only middle-class America but the rich and famous of Beverly Hills, who started electrifying their fences and arming themselves to the hilt after it was revealed that Mason kept a ‘hit list’ of potential celebrity targets. While mainstream books appeared covering almost every aspect of the Manson case and subsequent trial (and helping to create and define the popular true crime literary genre in the process), the more salubrious publishers preferred to create fictional potboilers which used the news headlines as merely a springboard for an adventure far more raunchy and gaudy. Ray Stanley’s The Hippy Cult Murders is a paperback that belongs squarely, and quite proudly, in the later category.

Published by MacFadden-Bartell in 1970 as a paperback original, The Hippy Cult Murders has as its demented saviour a psychotic guru who is somewhat prophetically known as Waco. Proclaiming himself to be the Son of Zember (the God of Fear), Waco and his long-suffering sidekick Whitey jump in their VW bus and split San Francisco for the more happening scene down in LA, where Waco plans to recruit a family of followers while spreading the word of Zember and finding a pure young hippie chick to be his bride (not an easy task in the free-lovin’ LA of 1969).

The physical and psychological similarities between Waco and Manson are obvious:

‘Waco was aware of the power within himself. And he knew the key to it was his eyes. His voice was soft, his manner quiet. He had the ability to gather girls around him. He had once been told by a girl that he reminded her a lot of Jesus Christ, with that bushy beard, those piercing blue eyes and the way he acted—like tolerant, like everyone came to him for wisdom, like they wanted him to tell them some great truth. The girl had been young and easy to impress. She had offered no resistance when he told her to undress.’

Likewise, the character of Whitey is clearly drawn from Charles ‘Tex’ Watson (though he is portrayed as a lot more flakey), and Waco’s group of young followers are modelled on some of the more infamous members of the Manson Family, who became virtual household names during the trial thanks to the obsessive media coverage which the case attracted.

Once in LA, Waco funds the set-up of his family by killing a couple of young female groovers who are heading home from a discotheque and taking off with their cash and cheque books, then hatching a plan to set up base on a large plot of land out in the San Fernando Valley, owned by an old widow (filling in for George Spahn) who is struggling to keep up with the payments (and who just happens to be looking after her innocent young granddaughter Debbie—the perfect virginal bride for the Son of Zember).

As expected, the big set-piece in The Hippy Cult Murders occurs when author Stanley stages his own version of Ciello Drive, which comes at the halfway point of the novel after Waco dons a lavender robe and drives Whitey and a trio of his chicks to the house of a well-off couple whom he’d earlier discovered were planning a little key-swapping party that evening.

‘Except for asking where they were going when he first came around, Whitey had remained silent. The girls, too, had not said much during the drive. In the front seat Marsha had gotten herself so worked up on pills and excitement that she had pulled her skin tight pants down and had pulled Waco’s hand over to her. The rest of the girls were drowsily high on pills.’

Although Waco puts his violent impulses and behaviour down to the will of Zember, it is really all about the bread, man. Specifically, the bread he needs to move his family and set up base on the plot of land out in the Valley. Naturally, since it is a swingers party he’s invaded, Waco discovers the three couples in the house stark naked and writhing around on three mattresses set up on the lounge room floor. Perhaps having a slight dig at the middle-agers who thought they were swingin’ hip at the time, the victims here are not beautiful young fashionistas but rather bland characters in their forties with sagging breasts and greying hair and names like Harold and Ruth. So in a sequence which stretches itself out to over thirty-plus pages, it’s Bob & Carol & Ted & Alice meets Helter Skelter as Waco and his crew extort, berate, terrorise rape and finally slaughter their captives. With ten grand now lining his robe, Waco settles his family on widow Elsie’s land and turns his attention to the virginal Debbie, who after a drug-fuelled ritual reminiscent of the climax from Russ Meyer’s Beyond the Valley of the Dolls (released the same year) is readied to accept Zember’s seed before Whitey, frustrated at playing second-fiddle and having to make do with Waco’s sexual cast-offs, decides it’s payback time and takes away Debbie’s purity, sending Waco into a rage that doesn’t end until a couple of LA cops on the Family’s trail turn him into Swiss cheese (unlike Manson, this cult leader received swift and savage justice).

‘Suddenly an avalanche of gunfire exploded along the street. Waco felt hundreds of tiny needles stabbing into him. But as the needles entered his body they widened to nails, then to spikes, then to stakes and to shovels. His body twitched and jerked. He bounced against a railing of the porch. His body was on fire! It hurt. It hurt badly. He grabbed the rail for support. What was happening? He felt all bubbly inside. Something was pouring out of him. A part of him was leaving his body. When he touched his stomach his hand came away wet and sticky. He was bleeding! Those bright lights. They were hurting him. But they didn’t seem as bright as they were before. They were becoming hazy.’

Unfortunately, while its subject matter does give it some undeniable off-beat appeal, and the cover art by O’Brien is a great piece of psychedelic sexual violence, The Hippy Cult Murders is not a particularly remarkable or memorable piece of work. It has enough cheap visceral thrills peppered throughout to at least keep you turning the pages, but you also get the feeling that the author (about whom nothing is known) is afraid to get his hands really dirty and take full advantage of all the potential he had at his fingertips. Regardless, it is still an intriguing piece of paperback pulp, and makes a nice eclectic addition to any collection of Manson related literature. 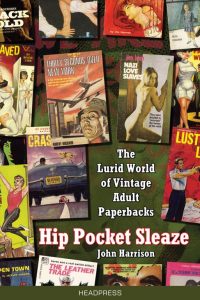 Related Posts
Part 2 of our interview with A THRILLER in Every Corner author Martin Marshall. The darker side of the...
Read More
MARTIN MARSHALL’s recent book, A THRILLER in Every Corner, is a meticulously researched valentine to...
Read More
The do-it-yourself publishing aesthetic. A conversation with Chris Mikul about Biblio-Curiosa and the...
Read More
Scouring the Headpress shelves, Jennifer Wallis falls down the rabbit hole with probably the only book...
Read More
Stuck indoors, David Kerekes finds the time to do the little things, like revisit Joe Lansdale's The...
Read More
The increased affordability of cars in the 1960s meant that retail businesses had to supply enough parking...
Read More
From a Victorian gentleman fascinated with working women to a pageant for barb wire, here are five top...
Read More
As many of us find solace in ‘comfort reading’, Jennifer Wallis revisits teen horror fiction of the 1980s...
Read More
Originally published in 1934, Elizabeth Jenkins’ Harriet is an unsettling account of murder, one that...
Read More
The premise: a phantom witch, her lips and eyes sewn shut, haunts the small town of Black Spring. Read...
Read More
PrevPreviousDead: A Celebration of Mortality
NextHEADzine 2.6Next