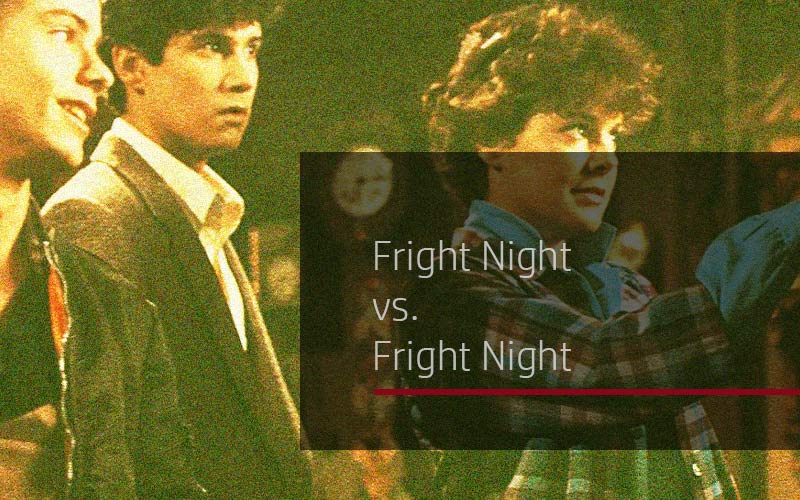 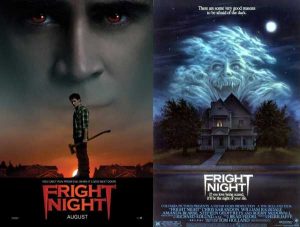 Ask me which film defined my childhood, growing up in the eighties and nineties, and it won’t be The Breakfast Club or Don’t Tell Mom the Babysitter’s Dead. Fright Night (1985) consumed my every waking moment for many months after my all too liberal-minded mother allowed me to watch the taped-from-TV version at the grand old age of nine. I still have the tape—the on-screen display tells me ITV screened it on Wednesday 29 January 1992—and I realise that I’ve never once seen the opening credits thanks to someone’s delayed reactions in pressing the ‘record’ button.

My introduction to horror was my mother’s recording of late night movies, which I merrily watched in place of kids’ weekend television—Hammer films, The Shining, The Exorcist… I have a distinct memory of The Devil within Her that I’m pretty sure laid the ground for my continued squeamishness at the mention of anything vaguely gynaecological. My mother’s progressiveness backfired only once with The Changeling, which resulted in weeks of nightmares and a dread of the cardboard-sleeved tape itself—finally thrown in the dustbin with some strong words by my father. He never challenged Fright Night, even making a mocked-up sleeve for the home-recorded tape and, when I discovered at the age of 11 that there was a sequel (Fright Night 2 [1988]), buying the 18-rated VHS with the reminder “You’re very lucky to be getting this, you know”, a point that I think was more for the woman behind the counter than for me.

At the centre of 1985’s Fright Night is Charley Brewster (William Ragsdale), whose chief interests are late night horror movies and getting into his girlfriend Amy’s (Amanda Bearse) pants. The Brewster’s suave new neighbour Jerry Dandridge (Chris Sarandon) turns out to be a vampire responsible for a spate of local murders, a fact obvious only to Charley. He enlists the help of Amy, friend Evil Ed (Stephen Geoffreys), and TV host Peter Vincent (Roddy McDowall) to kill Dandridge, all of whom are forced to accept the truth of Charley’s theory—hard not to, in fact, when both Amy and Ed become vampires themselves.

Fright Night was, to the nine-year-old me, the height of cool: where teenagers drove beat-up cars, swung by TV studios to chat to late-night hosts, and (possibly the most exciting part) went to schools where they wore their own clothes. I still loved Hammer, but after hours of watching Peter Cushing or Christopher Lee quashing evil by gaslight, Fright Night was the first horror film I’d seen where the main characters were young and (sort of) hip. My adoration for Stephen Geoffreys’ geekily cute character, horror movie buff Evil Ed, knew no bounds, and apart from being coerced into buying wildly inappropriate videos for his daughter, my father now spent his Sundays watching me throw away his money on any cheap vampire paperbacks I could find in Bradford’s Cannon Mills market.

Evidently I’m not the most objective person to be reviewing the 2011 remake of Fright Night, boasting a cast of household names including Colin Farrell and Toni Collette. I generally object pretty strongly to the remaking of cult horror classics—The Hills Have Eyes, The Texas Chain Saw Massacre, let’s not even mention The Wicker Man … I don’t even particularly like the vampire genre: the original Fright Night is the only vampire flick I ever ‘got’, and continue to like many years later.

I tried to like the remake, I really did. It’s a perfectly fine horror film and delivers everything the average audience wants: a bloody opening, Colin Farrell swaggering about in a vest, unfeasibly good-looking people at every turn (except of course the geeky character, of which more later), a car chase, explosions, vacuous teenagers, and a whole load of kick-ass weapons. The now obligatory use of technology in the horror film gives traditional vampire lore an interesting twist, with Dandridge (Farrell) invisible on film, replacing the usual mirror in which vampires cast no reflection. David Tennant must be enjoying something of a Renaissance among housewives everywhere with his portrayal of Peter Vincent: a bookish ‘vampire killer’ in the original, here he fronts a popular Derren Brown-type illusionist show, clad in tight leather trousers and—as a friend cuttingly noted—essentially plays Russell Brand.

Roddy McDowall, playing the first Peter Vincent, saw all this coming. In the 1985 film, he blames his dismissal from the TV station where he introduces horror films on modern viewers who don’t care about things like vampires, but only want to see ‘demented madmen running around in ski masks hacking up young virgins’. Granted, there’s none of that in the remake, but the vampires certainly seem, well, less vampirish. Whilst vampires have consistently been synonymous with sensuality, any hint of sympathy or attraction between Dandridge and his victims has been completely erased from the remake. One of the more innovative scenes in the original was that of Dandridge enticing Amy to dance with him in the middle of a crowded disco, where his lack of reflection was capitalised on by having Amy dance apparently alone past a wall of mirrors. This time, Amy and Dandridge are just another couple necking at the side of the dance floor. The original Dandridge, played to perfection by Chris Sarandon, was the classic vampire: well-dressed, old-fashioned, and romantic, finally seducing the wide-eyed Amy in a wood-panelled bedroom straight out of a Mills & Boon novel. Farrell’s Dandridge, in contrast, is an unlikeable character. He leers at Amy in a manner that’s more Benny Hill than Casanova, cadges free beer from the neighbours, and drinks it whilst watching reality TV shows. (There is though, a nice touch towards the end of the film, when Sarandon pops up as a passing motorist and the original Dandridge is killed by the new one.)

I guess traditional vampires also don’t entail as much fun for the special effects department these days, and that this is why Charley’s friend-turned-vampire Ed (Christopher Mintz-Plasse) ends up looking like he’s wandered off the set of 28 Days Later: an arm gets chopped off and there’s a near-decapitation but he struggles on to bare his teeth at Charley and throw in a schoolboyish homophobic joke.

More than any other remake I’ve seen, Fright Night highlights just how much the modern horror film relies on the beautiful teenage in-crowd to capture its audience’s attention. In 1985, we’d seen the vampire-next-door carrying a coffin through his yard within the first ten minutes – at the same point in the remake, we’re still being introduced to the fresh-faced young things who demonstrate their friendship by mocking each other’s coffee and shoe preferences. For some reason, in 1985 being a bit weird didn’t mean you had no friends: Geoffreys’ Evil Ed, other than protesting about his nickname, didn’t seem to have too many troubles, cracking jokes and teaming up with Charley’s girlfriend Amy to persuade Peter Vincent to the vampire-killing cause. Mintz-Plasse’s Ed, as a twenty-first century geek, is completely ostracised and an embarrassment to his ex-best friend Charley—so inessential to the plot that he’s taken under Dandridge’s wings after twenty minutes, only returning later for his pseudo-zombie moment. This scene also dispenses with the more emotive aspects of the original, where Ed walked willingly, sobbing, into Dandridge’s arms, but then having too much of that sort of thing probably makes it a bit ‘Twilight’ (a very bad thing: the characters themselves make derogatory jokes about it).

Admittedly, I’m taking it far too seriously: the original Fright Night was supposed to have its comedy moments, most of them provided by McDowall’s vampire-slaying Vincent. It wasn’t quite so over the top as this though (I can’t picture McDowall strutting around in leather, swigging absinthe): there was some genuine passion in it, the knowledge that you could have slow-paced scenes without worrying that the audience would demand their money back when there wasn’t an explosion or murder every five minutes. It’s the need to offer the viewer a constant stream of Effects! and Action! that, for me, made the revamped (oh dear) Fright Night really, really dull.

Jennifer Wallis is a historian of science, medicine, and technology, also distracted by British film and television of the 1970s, horror cinema, and power electronics.
Posts by this Author
PrevPreviousChris Mikul Picks His 5 Favourite Eccentrics
NextPower Electronic Landmarks: 5 Revolutionary TracksNext

Tomato Cain and Other Stories by Nigel Kneale
Jennifer Wallis reviews the new edition of Nigel Kneale’s Tomato Cain and Other Stories, recently released...
Read More
Offbeat Bingo
A list of films discussed in the recent Offbeat online panel event, handily crafted so you can mark them...
Read More
Figures in the Landscape: Rituals, Wilderness, and Canadian Cinema
Jennifer Wallis watches Rituals (1977) and explores Canadian wilderness on film in the tax shelter era.
Read More
Ansco Artworks: Lust for Life
Lust for Life, a 1956 biopic of artist Vincent Van Gogh, was shot on redundant film stock at director...
Read More
Crikey Moses! A Quick Look at the Making of The Ten Commandments (1956)
One special effect would dominate the film — the parting of the Red Sea. Julian Upton crosses Cecil B....
Read More
What is an Offbeat film?
Julian Upton talks about obscure British movies and their part in his book, Offbeat: British Cinema’s...
Read More
Offbeat Podcast
To coincide with the launch of the revised and updated Offbeat, a series of podcasts relating to the...
Read More
New Year, New You: 100 ways to improve your life
From fun with mould to making it Halloween all year round, Wallis and Wilson offer you 100 ways to almost...
Read More
Last Night in Soho: In some ways surprising
Morgan Jones looks at Last Night in Soho to find a clumsy but unabashedly enjoyable psychedelic horror...
Read More
Carrying on in the country house: Andrew Sinclair’s Blue Blood
JENNIFER WALLIS on Andrew Sinclair’s 1973 film, Blue Blood, its real-life and fictional inspirations,...
Read More