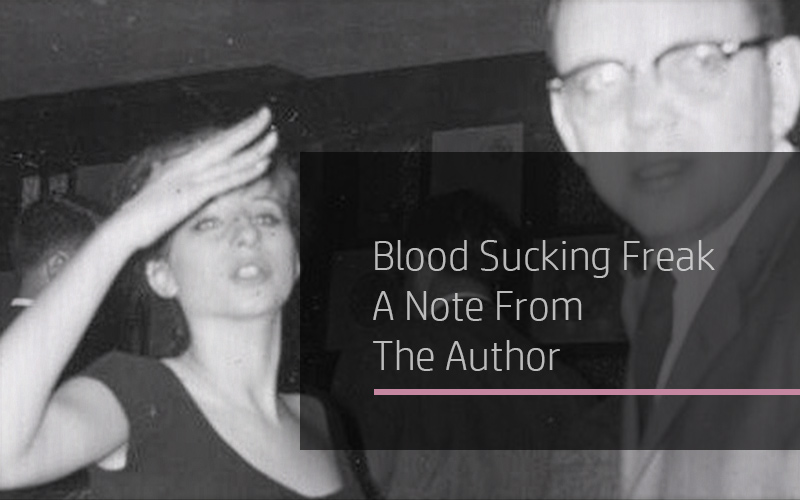 It took John Szpunar over twenty years to write this book. He thought it would be about a New York filmmaker, Joel M. Reed. It kind of is.

I started work on the book Blood Sucking Freak in 1998. I was twenty-four years old. I had visited New York City a few times prior to that, but by the time 1999 rolled around, I was flying in and out of town on a regular basis. I had made quite a few friends in the city and I leapt at every chance to visit them.

One of my friends lived in a small apartment in Midtown. His name was Joel M. Reed.

I had looked up Joel’s number in a Manhattan phone book in the winter of 1997. Surprised to find him listed, I decided to give him a call from my room at the Hotel Pennsylvania. Joel answered the phone and we started talking. I asked him a few questions about his most infamous film, Blood Sucking Freaks. Joel seemed more than happy to answer any question that I had, so I inquired about setting up a proper interview. “I’m in the book. You can always call me,” he said. I took that as a yes.

In January of 1998, I boarded a plane at the decrepit Detroit City Airport and wound up in Newark, New Jersey. A late-night bus ride took me under the Hudson River and into Manhattan. Charon might as well have been driving. An entry from one of my notebooks:

“Sitting across from Toothless, the Burro, and his bearded friend.”

I don’t really remember much about Toothless and company, but they certainly gave me a great feeling of unease. I was still new to New York. My expectations were high, but I remained cautious.

Scribbled on the same page: 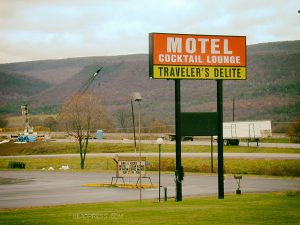 That, I remember. The place was a fountain of lights, and the splintered images of people who were not Toothless, the Burro, or his bearded friend gave me a great sense of comfort. Old men silently drank coffee at the counter as I passed them in the night. The sight of them calmed my nerves, and as the years went on, I made it a point to sit on the same side of every bus out of Newark in order to catch a glimpse of the place. I never recognized a single face, but I’d like to think that the same ambassadors were sitting there, time after time.

On January 10, 1998, I interviewed Joel Reed at a small restaurant called Sam’s. As we talked and ate, I knew that I had stumbled onto something special. Joel was full of incredible stories. As the hours flew by, I found myself hypnotized. Whether he was talking about his early days as a New York press agent or about the strange array of misfits that he collaborated with as a filmmaker, I was transfixed. As the sun rose over the city, I boarded my flight back to Detroit and made a pact with myself to return for more. Return I did, and in the pages that follow, I’ll tell you all about it. 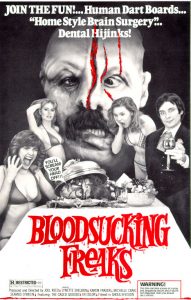 In those days, I made it a practice to carry small tape recorder wherever I went. I never knew what kind of mischief or adventures I’d get into, especially in a place like Manhattan. I was young, unstoppable, and, more often than not, full of drink. When the time came to revive this manuscript, I slid cassette after cassette into my old Panasonic Slimline and pressed play. There, ninety minutes at a time, was a choppy yet coherent diary of my misspent youth. Drunken ramblings, laughter with friends, and the voices of strangers. Loud, thumping bass from passing cars, snippets of long-forgotten conversations at restaurants, and music and noise from what was left of the sex shops and dirty bookstores that still haunted Times Square. The place was clean (and going on cleaner) by the time I made it there, but a few old sores were still festering under the whitewash. In some way, this book serves as a document of what was left of the madness.

Filth can find its way into anything, and in a place like Times Square, cleaned up or not, the odds are always in its favor. As I walked up and down the streets, I often found myself inhabiting a ghost world of a million different people, places, and things.

After my initial meeting with Joel, I returned to New York time and time again, sometimes flying sometimes driving. My partner in crime was a guy named Brian Krueger, a friend that I’d known since high school. He shared my love of booze and sleaze, and he made the perfect traveling companion. Every trip—every hour, minute, and second—was an adventure, and together, we staggered through the streets of New York with wide eyes and a wonderful sense of freedom. He was with me on every visit to Joel’s apartment, and his presence and influence on the pages of this book cannot be ignored. We were the best of friends, but the passage of time sometimes has a way of tearing friends apart. Here’s to you, BK. I hope you’re doing well.

I started work on this book in 1998. I was twenty-four years old. I last set foot in New York in 2004 and was amazed at how much the city had changed in just a few years. The last gasp of the old Times Square was all but a memory. No danger. No madness. No nothing. Things were clean then and I’m sure that they’re even cleaner now.

With that said, a word of warning to those who seek passage today: New York is a city that never sleeps, and neither do its ghosts. Be mindful when you meet them, and enjoy the ride.

Related Posts
From fun with mould to making it Halloween all year round, Wallis and Wilson offer you 100 ways to almost...
Read More
"A sense of permanence, like an old idea of a dystopian future," is how David Kerekes describes the photographs...
Read More
An archive interview with Gary Spencer Millidge about the strange village of Strangehaven, now a milestone...
Read More
JENNIFER WALLIS on Andrew Sinclair’s 1973 film, Blue Blood, its real-life and fictional inspirations,...
Read More
The day the world turned GREBO! Author Rich Deakin talks about Gaye Bykers on Acid, Crazyhead, Leicester,...
Read More
In the summer of 2018, Clint Carrick drove across the US visiting unremarkable skateparks in unremarkable...
Read More
Tasteless or underrated? Jennifer Wallis makes the case in support of Michael Winner’s supernatural horror...
Read More
Part 2 of our interview with A THRILLER in Every Corner author Martin Marshall. The darker side of the...
Read More
MARTIN MARSHALL’s recent book, A THRILLER in Every Corner, is a meticulously researched valentine to...
Read More
Director Tobe Hooper frequently alluded to the political messaging of his 1974 movie, The Texas Chain...
Read More
PrevPreviousMagic Morning Wood
NextFinding AntonioNext

John Szpunar is the author of the Rondo Award nominated Xeroxferox: The Wild World of the Horror Film Fanzine (Headpress, 2013) and co-editor of Famous Monsters Chronicles II (FantaCo Enterprises, 2016). He is a regular contributor to Weng’s Chop, Monster, and Evilspeak Magazine.
Posts by this Author