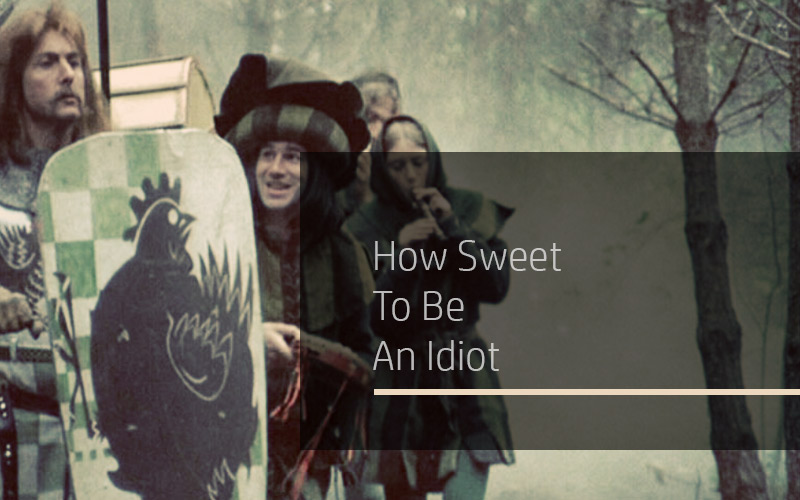 David Kerekes bids a fond farewell to Neil Innes, the impish figure behind some well-known acts, including Monty Python, the Rutles, and the Bonzo Dog Doo-Dah Band.

I have long admired Neil Innes. Foremost a singer-songwriter, he is perhaps best remembered not for his own output but as the impish figure behind some well-known acts, notably Monty Python, the Rutles, and the Bonzo Dog Doo-Dah Band. Innes was never an ‘official’ Python, but few can forget him in Monty Python and the Holy Grail, the singing minstrel to Brave Sir Robin. He wrote music for the Pythons and toured with them across America. He also co-wrote (with Eric Idle) and appeared in All You Need Is Cash (1978), a TV musical mockumentary about the Rutles, a fictitious band a lot like the Beatles. The Rutles encapsulated Innes’ keen talent for homage/parody/satire. Boasting an album’s worth of fine songs, the Rutles would become a credible ‘surrogate’ Beatles in a post-Fab Four world. (So much so that Innes’ original compositions for All You Need Is Cash share a copyright credit with Lennon and McCartney.)

Shortly after All You Need Is Cash came another Innes project. First broadcast in 1979, The Innes Book of Records was a sketch show in music form. Each episode featured several original Innes’ compositions (and those of the occasional guest) accompanied by visual vignettes that were humorous but also odd and unsettling. Songs in a variety of styles oozed bathos. This was pure undistilled Innes. Not everything worked, but it was all great. His alter ego in Book of Records was a baleful ‘host’ who traipsed about in fields and caves, singing songs. He wore whiteface paint, dinner suit and tails, a bridge between British music hall and punk rock pantomime (looking in turns like Max Wall and the Damned’s David Vanian). Book of Records is gentle anarchism in an era of punk and seems to me a signifier for TV shows such as Not the Nine O-Clock News and The Young Ones.

[su_youtube url=”https://www.youtube.com/watch?v=amiBTezWKqQ” title=”The Rutles perform Get Up And Go on the rooftop of Rutle Corps.”]

My gateway to the Rutles and the Innes Book of Records was the Bonzo Dog Doo-Dah Band. The Bonzos ignored pomp and convention and paved the very short path that is British-Whimsy-Jazz-Spoken-Word-Psych-Pop-Rock, indebted to old 78 records, the foxtrot and the samba, as much as, say, the music of Cream or the Beatles. Fronting the band was Vivian Stanshall. Like Innes, he too was an idiosyncratic and distinctive creative element, but in partnership they helped produce in the Bonzos a wonderful madcap synergy. Their first album Gorilla was for years a firm favourite of mine, a cool, hip record that operates on its own terms. Some tracks go nowhere but go there well (The Intro And The Outro), while others are perfectly bad performances perfectly performed (Jazz Delicious Hot, Disgusting Cold). Among them were fragile gems like The Equestrian Statue, a lovely slice — if not also a send-up — of English pop baroque.

Which brings us to the BFI Southbank, September 8, 2011. The Southbank was the location for an evening with Neil Innes, comprising a career-spanning Q&A coupled with a screening of a rare Bonzos film. I chalked the evening up as a personal victory, having twice before attempted to see Innes without success. The first time was at the tail end of the 1970s when Innes was touring his Book of Records. The scheduled gig at Bury’s Derby Hall coincided with a blizzard. Having braved the snow, I arrived at the venue to find a note on the door stating the show was cancelled. The rescheduled gig, when it came around, was also cancelled. But years later, from a BFI stage, the modest Innes regaled a packed house with witty showbiz anecdotes (present were members of The Young Ones).

The rare Bonzos film was a short, The Adventures of the Son of Exploding Sausage, which features the band performing on a farm. It’s suitably chaotic. They arrive by steamroller, offload gear (hindered by small children who make off with some of it) and have a tea party. It’s little over halfway through the thirteen minutes running time when the band actual begins to play. It ends with them climbing into a car and driving solemnly away. Typical of the era, Sausage is (ahem) neither fish nor fowl. It’s not a promo film and it’s not a documentary or narrative film. Given my interest in Neil Innes and the Bonzos, as well as British short films, I decided to track down David Korr, the writer, editor and director of Sausage. This was easy. The day after the BFI screening I found his email address on-line and emailed him. He got straight back. Although he lived in the US, he was travelling Britain, was pleasantly surprised that I had seen his film and to hear that the BFI still shows it. “They may have the only copy left that preserves the original colour,” he wrote.

Neil Innes passed away on 29 December 2019. He was involved in many other things besides those mentioned above (Rutland Weekend Television and the children’s animated series, The Raggy Dolls, to name two more).

More Innes! More Bonzos! Read an interview with David Korr, the man behind The Adventures of the Son of Exploding Sausage here.

David Kerekes founded Oil On Water Press and is one of the founders of Headpress. He has written extensively on popular culture, is co-author of the books Killing for Culture and See No Evil, and author of Mezzogiorno, a meditation on life and Southern Italy.
Posts by this Author
PrevPreviousMy Favourite Dictators And Why
NextThe Adventures of the Son of Exploding SausageNext

Science — A Ghost Story for Our Time
A paranormal experience leads David Kerekes to consider two magazine subscriptions and 'reality' as a...
Read More
What is an Offbeat film?
Julian Upton talks about obscure British movies and their part in his book, Offbeat: British Cinema’s...
Read More
My Bones and My Flute: Remembering Edgar Mittelholzer
David Kerekes explores childhood and two novels by Edgar Mittelholzer, My Bones and My Flute and The...
Read More
JOHN CALE IN THE ’70s
In the mid-70s, John Cale released three albums on Island Records. It's an exceptional period for the...
Read More
Dangerous Encounters: The Horror Film Fanzine as a Subversive Art
A single staple is the most primitive of zine bindings. Find out why Colton Cobb's Dangerous Encounters...
Read More
Kapt. Kopter & The (Fabulous) Twirly Birds. Not a commercial success.
Gareth Wilson has never really connected with a lot of ‘psychedelic’ music. But he does like Kapt. Kopter...
Read More
‘I press the shutter and it’s my way of saying WTF’
"A sense of permanence, like an old idea of a dystopian future," is how David Kerekes describes the photographs...
Read More
‘Strangehaven? Can’t even find Strangehaven on this bloody map…’
An archive interview with Gary Spencer Millidge about the strange village of Strangehaven, now a milestone...
Read More
“I ended up being in two of their films that night”
What is a custom movie? David Kerekes looks at Mail Order Murder: the Story of W.A.V.E. Productions and...
Read More
A Big Bad Beautiful Noize
The day the world turned GREBO! Author Rich Deakin talks about Gaye Bykers on Acid, Crazyhead, Leicester,...
Read More