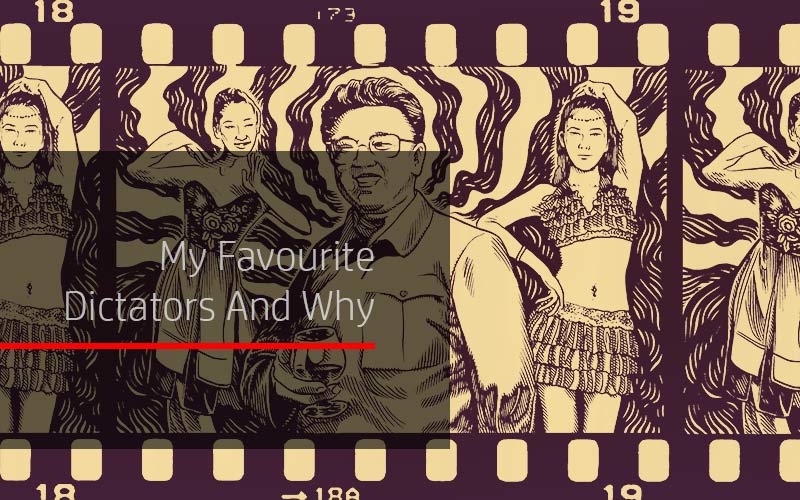 Dictators may be among the worst people in history, but that doesn’t mean we shouldn’t laugh at them. In My Favourite Dictators, CHRIS MIKUL tells the stories of eleven of the twentieth century’s most colourful and reviled human beings. Here he explains how and why he came to write his book, and who is in it. Illustations by Glenn Smith.

I have been fascinated by dictators from a very young age. My father, who was Czech, suffered greatly thanks to Hitler and then Stalin before he migrated to Australia in the 1950s. There were many books on World War II and the Cold War in our house, and I was looking through these even before I could read.

I have long had a fascination with eccentrics and written about them extensively, most notably in my book The Eccentropedia. My interest in dictators is in some ways an extension of that, as they are usually very strange people with a great many peculiarities. I hasten to add though that, for me, eccentrics are generally benign individuals, while dictators are obviously not. The fundamental difference, I would say, is that most dictators would have been completely normal, probably boring people if they had never attained absolute power.

The most surprising thing I found while researching the book was how little I knew about these people, when I thought I knew quite a lot. It was particularly difficult finding details about their private lives (which is a focus of my book) because most books about dictators are political or academic studies which often only mention their private excesses in passing. Gaddafi was probably the biggest surprise. He was admired by many in his early years for his supposed progressivism, and in his later years was feted as a friend of the West by the likes of Tony Blair. But in person, he was little more than a compulsive rapist of anything with a pulse, and the most vile human being I know of. I had to have a shower after I finished writing about him. Mao was another eye opener. Despite being the worst mass murderer in history, the view of him, both in China and outside it, is still relatively positive, with nothing like the opprobrium heaped on Hitler or Stalin.

The view of him, both in China and outside it, is still relatively positive, with nothing like the opprobrium heaped on Hitler or Stalin

My Favourite Dictators looks at the politics of each dictator’s rise to power and (in most but not all cases) downfall, but unlike most books on the subject concentrates on the personalities, peculiarities and private lives of these invariably strange human beings. You will read of their generally voracious sexual appetites, effortless cruelties, ostentatious uniforms, love of terrible art, pretensions to being great writers, and appalling taste in interior decoration. After an introduction examining the concept of dictatorship and the similarities and differences between various dictators, the book takes an in-depth look at the following. 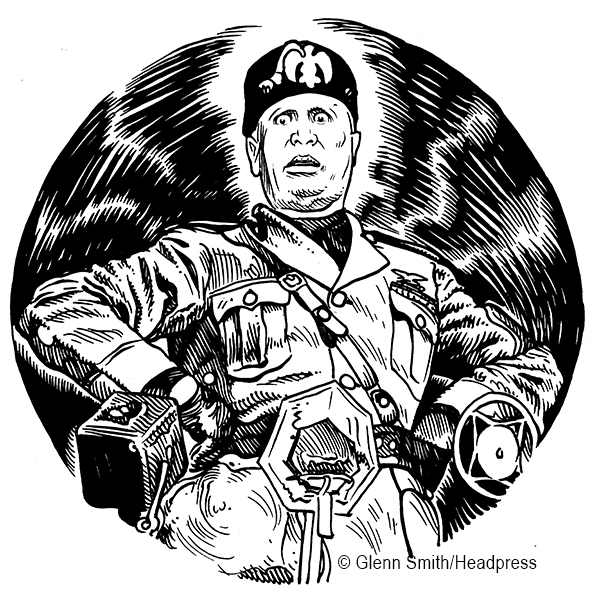 Mussolini became Italy’s leader in 1921. He was immensely popular in Italy in his early years, and hailed as a great statesman by people like Churchill. Key to his popularity was his virility, and so many women wanted sleep with him that he had an office opened to sift through the requests. (Successful candidates were generally allotted half an hour with il Duce, whose preferred place for making love was the floor.) Hitler worshipped Mussolini, and copied him. Mussolini was far less impressed by Hitler, but threw in his lot with him after the war began. It was a disastrous decision, his popularity plummeted, and he ended up strung up by his heels in a public square with his favourite mistress hanging next to him.

Hoxha (pronounced Hodja) was the communist dictator of the Albania for over 40 years. During that time he managed to almost completely isolate his country from the outside world. Albanians were unable to leave the country, and almost all foreign books and films were banned. (Although he made a number of strange exceptions, including the films of knockabout British comedian Norman Wisdom, who became a cult figure in Albania.) Hoxha was a dictator in the Stalinist mould who conducted endless purges, By the end of his rule, virtually every one of his comrades from his early years had been executed.

Coming to power in 1949, Mao was hell-bent on making China an industrial powerhouse, but his recipes for doing so were disastrous – the Great Leap Forward, launched in 1958, resulted in some 45 million Chinese starving to death. In his private life, Mao spent most of his time in a large bed, and had an insatiable appetite for young girls, who were brought to him on an almost industrial scale. During the mid-60s, fearing the purity of his revolution was being betrayed, he launched a final catastrophe in the Cultural Revolution.

Duvalier, or ‘Papa Doc’, began his career as a doctor and ethnographer interested in voodoo. Throughout his years as the dictator of Haiti, the impassive, inscrutable dictator was widely believed to be a voodoo priest who made charms out of the body parts of his enemies. His rule was characterised by his terrifying private police force, the Tontons Macoutes, who were given free reign to terrorise and kill. Under his rule, Haiti became the poorest country in the Western Hemisphere, and remains so today.

An uncommonly drab and uncharismatic dictator, Romania’s Ceaușescu was matched in frightfulness by his wife Elena. For a while, he was feted by the West for standing up to the USSR, but there were few things more feared than a state visit by the Ceaușescus, whose entourage were known to pilfer anything not nailed down Ceaușescu clung to power for decades, but he couldn’t survive the revolutions of 1989, when he and Elena were put up against a wall and shot.

Bokassa, a former officer in the French army, became president of the Central African Republic, and in 1977 had himself crowned emperor in a ceremony where he sat on a huge golden throne in the shape of an eagle. An extremely vain man, he like to strut around in uniforms dripping with medals he had awarded himself. His regime was funded by the French government, but when his brutalities grew too embarrassing, he was unceremoniously booted out.

Marcos may have begun his career by murdering a political opponent of his father when he was a teenager, but he was less bloodthirsty than most dictators. Instead, he and his glamorous wife Imelda concentrated on raiding the coffers of the Philippines, with Imelda becoming notorious for her huge collection of shoes. Marcos’s claims to have been a great resistance hero during World War II were entirely spurious, but he is still fondly thought of by many in the Philippines, where his children are still involved in politics.

Gaddafi seized power in Libya in 1969, in a military coup he had been planning since he was a teenager. With his political manifesto, The Green Book, he upended Libyan society, introducing his own peculiar form of socialism along whit a host of other weird ideas. He used his oil money to bankroll violent revolutionary movements around the world, and grew more debauched as the years went by. It was well known within Libya that he was a transvestite, and towards the end, he was spending almost every waking moment raping women and men (including the wives of his general – and his generals.) 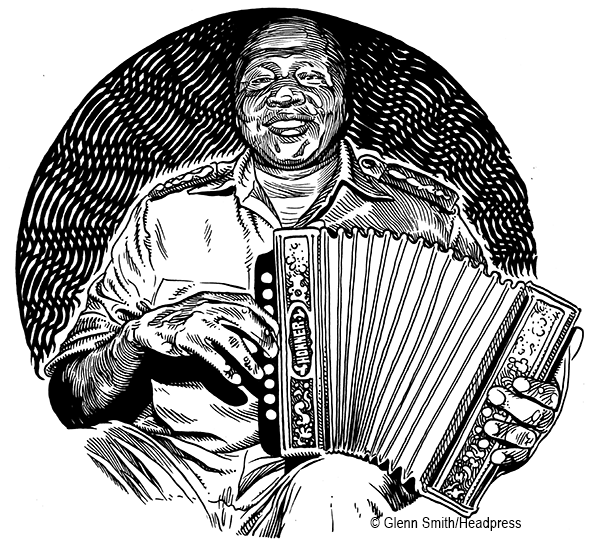 The buffoonish Amin, Uganda’s ‘Big Daddy’, became a figure of fun in the West, but this often disguised a dictator as brutal as any. He was famed for his musical performances, love of Scotland (he offered to be its king), and (alleged) cannibalism and penchant for keeping the heads of his victims in his fridge. Fleeing Uganda after an invasion by Tanzania, he went into comfortable retirement.

Saddam was famed for the iron grip he had on Iraq, and the brutality of his regime. Posing as the benevolent father of his country, he fostered a pervasive personality cult, He considered himself a military genius, but his military ventures, the war with Iran and invasion of Kuwait, only resulted in crippling Iraq’s economy. He spent most of his last few years writing romantic novels.

After succeeding his father, Kim Il-sung, Kim Jong-il became the world’s first hereditary communist leader in history. His greatest love was the cinema, and he amassed the largest ever private collection of movies from all around the world. and supervised the production of many movies. As many North Koreans starved, his lavish private life was fueled by imported luxury goods, cigarettes and brandy. When it came time for him to decide on who should be his successor, he picked the meanest of his sons – Kim Jog-un.

Related Posts
"A sense of permanence, like an old idea of a dystopian future," is how David Kerekes describes the photographs...
Read More
The day the world turned GREBO! Author Rich Deakin talks about Gaye Bykers on Acid, Crazyhead, Leicester,...
Read More
In this archive interview, Julian Butler talks about the pitfalls of leaping from no-budget filmmaking...
Read More
Part 2 of our interview with A THRILLER in Every Corner author Martin Marshall. The darker side of the...
Read More
MARTIN MARSHALL’s recent book, A THRILLER in Every Corner, is a meticulously researched valentine to...
Read More
Director Tobe Hooper frequently alluded to the political messaging of his 1974 movie, The Texas Chain...
Read More
Clint Carrick grew up in a small town where the skatepark was king to kids just like himself. He was...
Read More
An audio sample of the book, The Town Slowly Empties: On Life and Culture during Lockdown. On why we...
Read More
The do-it-yourself publishing aesthetic. A conversation with Chris Mikul about Biblio-Curiosa and the...
Read More
Speaking from his New Delhi apartment, author Manash Firaq Bhattacharjee chats about his new book The...
Read More
PrevPreviousSingalongacharlie: The Music of Charles Manson
NextHow Sweet To Be An IdiotNext