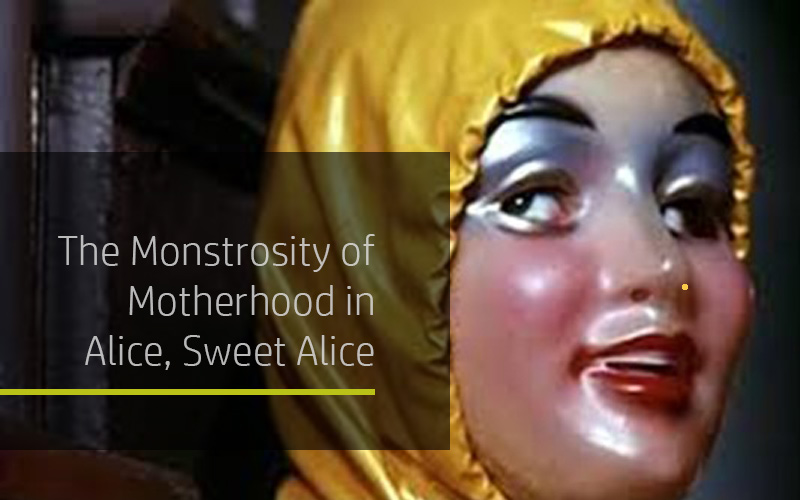 In her first blog post for Headpress, Lakkaya Palmer explores the representation of monstrous mothers and children in Alice, Sweet Alice, and argues for the film as a key entry in the 1970s ‘family horror’ canon.

The theme of child neglect weighs heavy in Alfred Sole’s Alice, Sweet Alice (1976) aka Communion. In Fantasies of Neglect: Imagining the Urban Child in American Film and Fiction, Pamela Wojcik argues that the concept of the negligent mother became synonymous with the feminist mother in the 1970s. Alice, Sweet Alice is particularly interesting in this regard. The film depicts Catherine Spages (Linda Miller) as a recently divorced mother of two girls, Karen and Alice (Brooke Shields and Paula Sheppard).

It’s obvious that Catherine prefers Karen over Alice: perhaps one of the worst sins a mother can commit is not loving all her children unconditionally (even if Alice is a horrible child with murderous impulses). In part, this preference for Karen seems to be tied to Alice’s status. In the seventies, with growing reproductive agency for women, there was a surge of children born out of wedlock. Alice was one of these: she is ‘illegitimate’, and her mother upholds the religious belief that premarital sex is sinful. Is Catherine’s guilt the reason for her mistreatment of Alice? Alice’s illegitimacy might be read as a commentary on children raised out of wedlock by neglectful mothers who deviated from societal norms. In an early scene in the film, Father Tom (Rudolph Willrich), Catherine, and Karen sit around the kitchen table while Alice is left standing. Father Tom gives Karen a crucifix, as Alice looks on sullenly. As Catherine and Father Tom gush over Karen and her beauty, they ignore Alice. They are one big happy family, but Alice is not included. 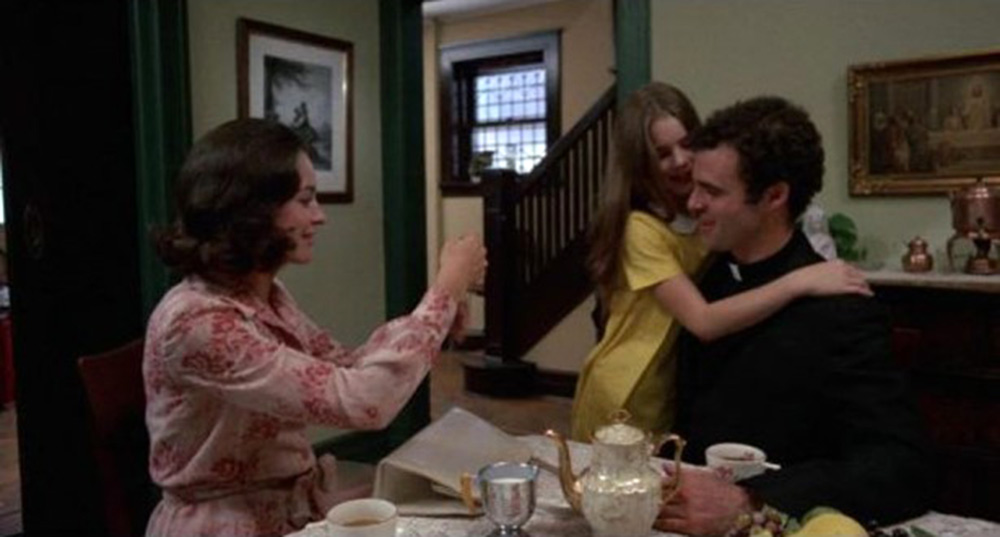 Catherine’s negligence is further emphasized by the film’s hinting at child sexual abuse. Catherine seems to have no issues with Father Tom kissing her youngest daughter Karen and giving her a necklace. She makes the peculiar remark: “You look beautiful, you’re going to be the prettiest girl there [at communion], wait until Father Tom sees you.” Catherine also leaves 12-year-old Alice open to abuse by sending her to the perverted landlord with the rent money. He tries to grope Alice, but she runs swiftly away. Catherine’s actions suggest she is complacent, negligent, and enabling the abuse of her daughter beyond the safe space of the home. 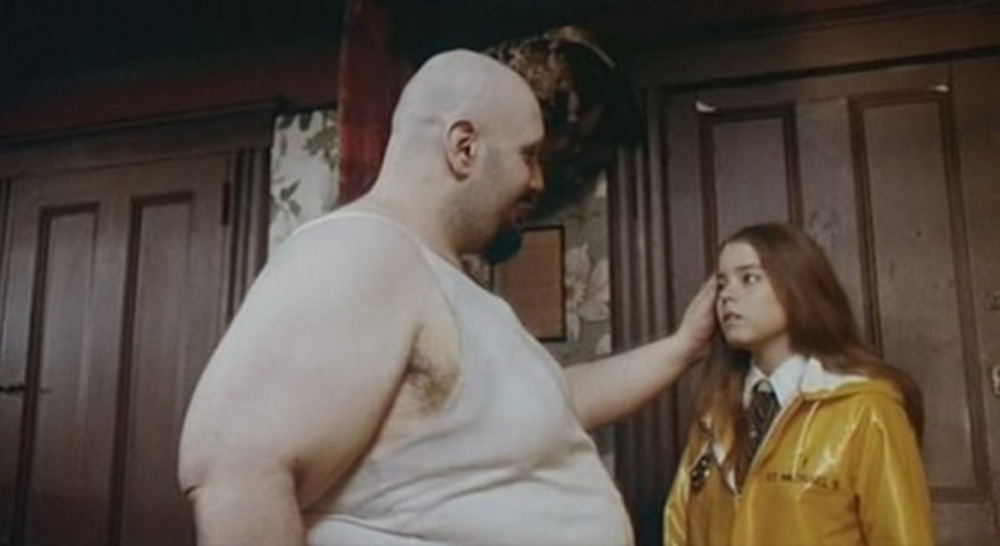 “Children pay for the sins of their parents”

Julian Petley, in his work on ‘The Monstrous Child’, agrees with Sarah Arnold’s argument in Maternal Horror Film: Melodrama and Motherhood, that a central feature of the 1970s horror film was the child as monster. Neither Alice nor Karen have been correctly socially conditioned by Catherine: they are both defective in some way. Due to Catherine’s unequal treatment of her daughters both Alice and Karen have issues with behaviour: one is a bully and, perhaps, a murderer; the other is too subservient. In Vivian Sobchack’s Screening Space: The American Science Fiction Film, she describes the children of monstrous mothers as changelings, who victimise their households and threaten society. Alice does exactly as Sobchack says. She terrorises the household with her constant torment of her sister, and – it is suggested – poses a wider threat to society: the film’s bleak ending shows her brandishing a butcher knife.

In Alice, Sweet Alice, it is clear that the traditional nuclear family is in chaos: the household is fatherless and Catherine is a divorcee. Karen and Alice share a sibling rivalry, with Alice often tormenting and threatening Karen (“If you tell mommy, you’ll never see your doll again”). Alice’s torment of Karen might be read as a way of seeking attention from her mother. Certainly, psychologists like Barbara Almond in The Monster Within: The Hidden Side of Motherhood have highlighted how lack of attention from a mother may make a child insecure. The source of Alice’s feelings of insecurity are plain to see:  her mother prefers her sister for her intelligence, beauty, and obedience, treating Karen better because she is prettier and more “lady-like”. Alice’s bullying and temper tantrums are a textbook example of a child trying to get attention from a mother in any way they can. 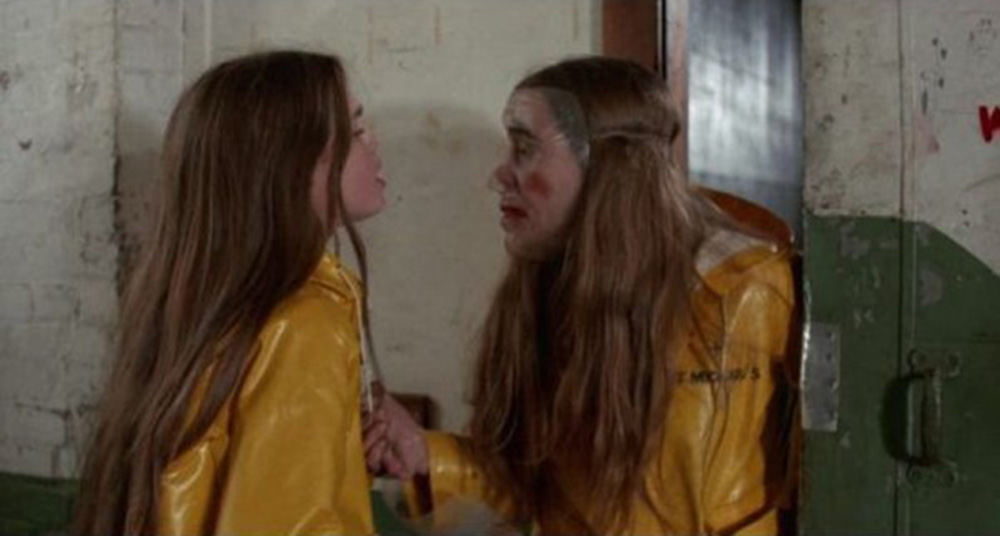 Visually, the film has some striking moments. The scene above is a case in point. Whilst Alice is teasing and bullying Karen the viewer can see that there is not much difference between them: around the same height, same hair length, even wearing the same coat. The scene suggests that the little girls should be equals and treated the same; however, their mother treats them very differently. The juxtaposition of innocence and monstrosity is further highlighted by Alice wearing a mask. Whilst Karen’s face registers fright and perhaps innocence, Alice’s emotions are hidden from the viewer. She hides behind a mask as she commits the monstrous act of tormenting her sister.

In part, the film suggests that such bad behaviour is learned. Catherine negatively influences Alice by her supposedly immoral behaviour, which Alice imitates. Alice is often told to be ladylike by Mrs Tredoni (the film’s true villain). Everyone in the film rejects Alice, telling her she needs to change, to “be a lady”, and to conform to the gender-stereotypical role of feminine passivity. Alice may be imitating her mother’s ‘unladylike’ behaviour when she bullies her sister, however. As recently as 1995, one writer in Cosmopolitan argued that women who cheat are still typically seen as defective in some way: a bad woman is a bad mother. Catherine, who was engaged in an extramarital affair, could be read as an ‘immoral’ character – so it should not be expected that Alice be moral. Although the feminist movement of the seventies fought against such easy equivalences, as well as traditional feminine roles, Alice, Sweet Alice – like many other films of the period – presents some problematic and conflicting messages about the effects of such liberation.

The film captures some of the fear and anxiety in society at the time: about mothers who were living in a time of feminism and societal upheaval that – many believed – would negatively affect the upbringing of their children. As Mrs Tredoni warns: “Children pay for the sins of their parents.” Both Alice and Karen are paying for the sins of their mother, an adulteress who favours one child over another and cannot maintain order within the domestic sphere. This message, that the monstrosity of the mother results in the monstrosity of her children, was what intrigued me about the film. The film has a very prominent message about the traditional moral order and how this was believed to be in upheaval. The hypocrisy of Christian America is highlighted by Catherine’s premarital sex and adultery, and Father Tom’s hinted perversion. At the end of the film viewers see Alice go out into the world with a huge butcher knife, implying that nobody is safe.

Alice, Sweet Alice fits perfectly into the ‘monstrous motherhood’ trope seen in much 1970s horror, but here the monstrosity is more subtle than that seen in its counterparts. Catherine does not attempt to murder her child like Margaret White in Carrie (1976). Nor does she endorse physical abuse in the way that Chris MacNeil can be seen to do in The Exorcist (1973), allowing her child to endure torture under the guise of exorcism. Rather, Catherine Spage’s monstrosity stems from the fact that her nonchalant attitude results in the neglect and abuse of Alice and the death of her beloved Karen. Both Alice and Karen are a product of their mother’s failings: a horror trope that, one could argue, continues to this day.

Barbara Almond. The Monster Within: The Hidden Side of Motherhood (University of California Press, 2011).

Figures in the Landscape: Rituals, Wilderness, and Canadian Cinema
Jennifer Wallis watches Rituals (1977) and explores Canadian wilderness on film in the tax shelter era.
Read More
Ansco Artworks: Lust for Life
Lust for Life, a 1956 biopic of artist Vincent Van Gogh, was shot on redundant film stock at director...
Read More
Crikey Moses! A Quick Look at the Making of The Ten Commandments (1956)
One special effect would dominate the film — the parting of the Red Sea. Julian Upton crosses Cecil B....
Read More
Offbeat Podcast
To coincide with the launch of the revised and updated Offbeat, a series of podcasts relating to the...
Read More
Last Night in Soho: In some ways surprising
Morgan Jones looks at Last Night in Soho to find a clumsy but unabashedly enjoyable psychedelic horror...
Read More
Carrying on in the country house: Andrew Sinclair’s Blue Blood
JENNIFER WALLIS on Andrew Sinclair’s 1973 film, Blue Blood, its real-life and fictional inspirations,...
Read More
“I ended up being in two of their films that night”
What is a custom movie? David Kerekes looks at Mail Order Murder: the Story of W.A.V.E. Productions and...
Read More
Fear Street: Part Three – 1666
In the final instalment of her Fear Street review trilogy, Lakkaya Palmer considers the history lessons...
Read More
Fear Street: Part Two – 1978
In her second blog on Netflix’s Fear Street trilogy, Lakkaya Palmer reviews the 1978 instalment, where...
Read More
Fear Street: Part One – 1994
It’s made a bloody splash on Netflix this July, but is the Fear Street trilogy just for kids? Lakkaya...
Read More