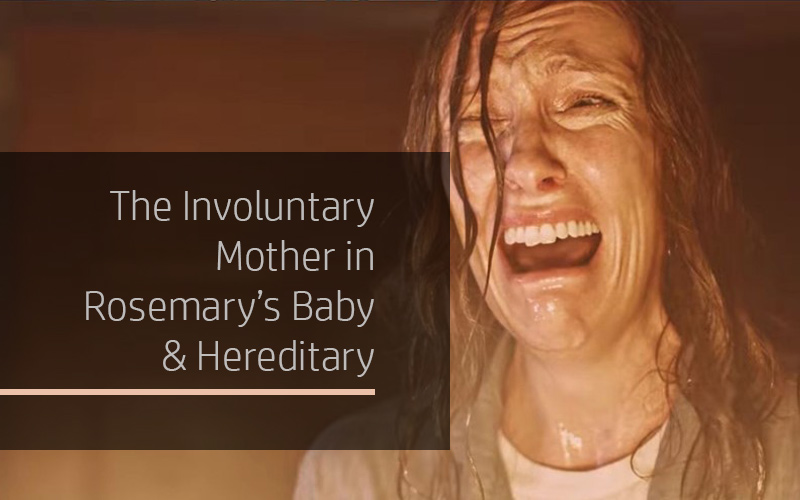 Rosemary’s Baby (1968) and Hereditary (2018) may be 50 years apart, but both films have one prominent theme: the involuntary mother. In both films women are depicted as being horrified by their children. Rosemary (Mia Farrow) leans over the crib of her baby, ready to kill it if necessary; Annie (Toni Collette) screams at the sight of her eldest son, Peter, as ants cover his face. Horror has always relied upon presenting women in unnatural and disorderly ways. It has become a common trope for women not to experience maternal bliss and happiness upon the arrival of children, but rather to have feelings of grief, resentment, and ambivalence toward their offspring. The antimaternal trend seen in films such as I Don’t Want To Be Born (1975) or The Omen (1976) has continued in recent years with the likes of The Babadook (2014).

Rosemary and Annie, both horrified by their children. 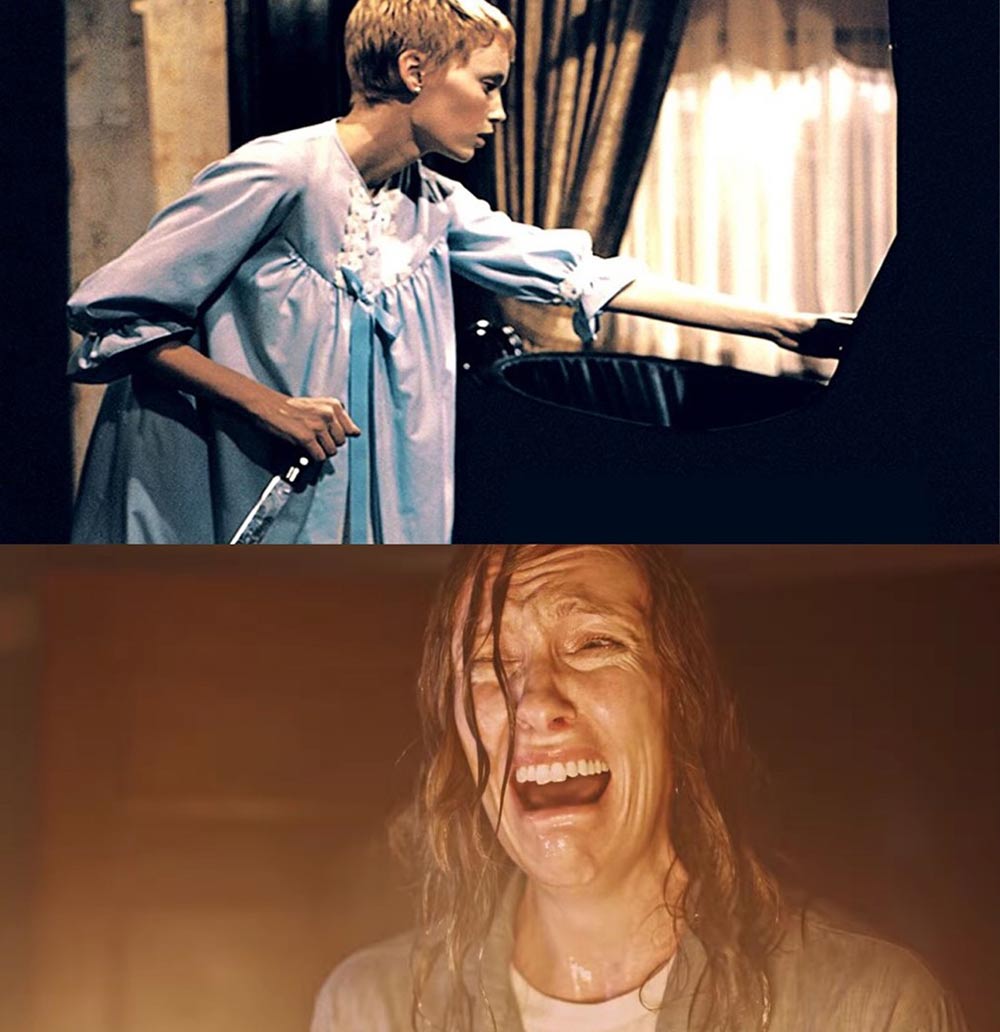 Rosemary’s Baby and Hereditary, of course, are set in very different social contexts. In Rosemary’s Baby, involuntary motherhood has to be read within the context of the rise of the 1960s women’s liberation movement. At first glance, Rosemary seems like the perfect traditional woman: married, submissive to her husband, and immaculately dressed. However, she does not have a child. I would argue that it is Rosemary’s childlessness that renders her monstrous from the male, heteronormative perspective – where an unwillingness to become a mother is synonymous with a failure of womanhood. Even the title suggests that Rosemary and her baby are inextricably linked; when we find at the beginning of the film that Rosemary does not have a baby, her childlessness becomes uncanny. Sarah Arnold, in Maternal Horror Film: Melodrama and Motherhood (2013), argues that pregnancy, although often depicted in modern times as a joyful experience, has ‘historically had been treated with deep suspicion and concern’. (In Renaissance Italy, when a woman found out she was pregnant the first thing she would do was write out her will.)

Such feelings of maternal ambivalence can also be seen in Hereditary. The film’s matriarch, Annie Graham, states that she never wanted to be a mother and was pressured to have children – presumably by her mother Ellen (aka Queen Leigh) in consequence of her cult’s desire to find a human vessel for a demon. Annie confesses to son Peter in a dream sequence that she tried to have a miscarriage by doing everything the doctors told her not to, but it did not work. 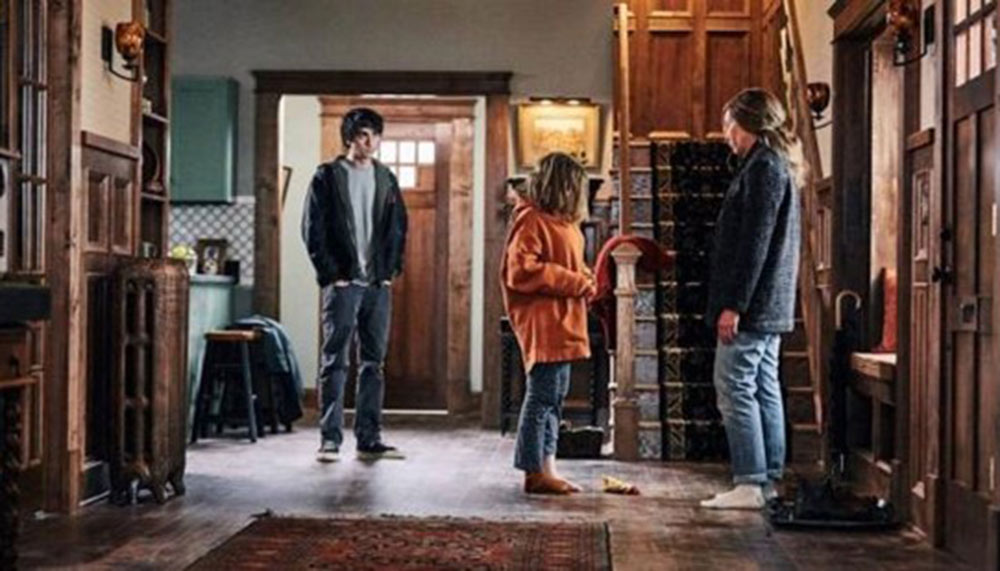 Annie has ambivalent attitudes towards both of her children, Charlie, and Peter: the conversations she has with them seem cold and almost forced, making the children seem more like burdens than bundles of joy. In one of the film’s most captivating scenes, whilst the family are eating dinner, Annie is questioned by Peter, and her resentment explodes:

“Don’t you swear at me you little shit. Don’t you dare raise your voice at me. I AM YOUR MOTHER. All I do is worry and slave and defend you. And all I get back is that fucking face on your face! So full of disdain and resentment and always so annoyed.”

In some ways Hereditary villainises Annie for not being the perfect, all loving, all caring mother. But, she is dealing with the complex and intricate emotions of grief, trauma, and possible mental health issues at the same time as being a mother – a role that she never wanted in the first place.

Rosemary’s involuntary motherhood is made more explicit: a child is bestowed upon her through marital rape. Susanne Kord, in Little Horrors: How Cinema’s Evil Children Play on Our Guilt (2016), has noted that the ‘mothers’ role in procreation is … secondary’. Similarly, Lucy Fischer in Cinematernity: Film, Motherhood, Genre (1996), writes that Rosemary’s Baby documents the societal and personal turmoil that has regularly attended female reproduction. For a lot of women, the degree of agency they had over their bodies was limited before laws were introduced giving them more reproductive rights. Before the contraceptive pill (1960) or the legalization of abortion in America (1973), the risk of pregnancy loomed large.

Rosemary’s ambivalent attitude towards motherhood, then, could be linked to her sexual assault. Likewise, Annie is a victim of abuse, in her case the psychological abuse of her mother. Not only did Ellen force Annie to have children, but she was also very aloof towards her. Annie is psychologically scarred by her mother’s treatment; it is a constant reference point in the film that Annie has a ‘no contact rule’ with her mother and does not let her anywhere near Peter. In a support group meeting, Annie mentions that her older brother committed suicide at 16 having accused Ellen of “trying to put people inside of him”. Annie likely blames her mother for her brother’s death. Perhaps Annie’s apprehensiveness about having children stems from a fear of becoming like her mother. Little does Annie know that this is inevitable – indeed hereditary.

Children, changelings, and the eradication of the family unit

Throughout history, women have found ways to rid themselves of unwanted children. In At the Bottom of the Garden: A Dark History of Fairies, Hobgoblins and Other Troublesome Things (2013), historian Diane Purkiss discusses 18th-century mothers who claimed their children were changelings. The mother would ‘walk into the woods with a baby, put the baby down, and just … walk away. She would keep walking until she could no longer hear the child crying’. Perhaps, muses Purkiss, these women were trying to get rid of an unwanted child, whether due to ‘depression, delusions or … [desperation]’.

In Hereditary, Annie confesses in a cryptic scene:

“Okay, I sleepwalk. I mean, I haven’t done it in many years, but a couple years ago I woke up. I was standing next to Peter and Charlie’s beds when they shared a room. They were completely covered in paint thinner. And so was I. And I was there with a box of matches and an empty can of paint thinner. I woke myself up striking a match which also woke Peter up and he started to scream. I immediately put the match out – immediately! I mean, I was just as shocked as he was! And it was IMPOSSIBLE to convince them it was just sleepwalking … which of course it was!”

This scene is more revelatory than it is given credit for. It sounds like Annie is trying to convince herself that she was not in her right mind because she was “asleep”. But could the sleepwalking be a disguise for her true intentions? Annie never wanted children: could the resentment have built up so much that she wants to eradicate them? Annie’s persistence in asking Charlie to go to Peter’s school party is a little unnerving. This persistence takes on greater weight when viewers see that the trip leads to Charlie’s decapitation and Peter’s slowly deteriorating mental state. Could Annie have subconsciously been in on the cult’s dealings all along, helping them to free her from her family unit? Towards the end of the film, Annie begs husband Steve to burn a sketchbook. When he refuses to do so she proceeds to throw the book into the fireplace, causing him to burst into flames. Annie knew the cost of burning the sketchbook because she tried to burn it herself in an earlier scene, resulting in her arm catching fire. Why would Annie beg Steve to burn the book knowing the consequences? It seems to me that the whole plot of Hereditary is Annie subconsciously trying to rid herself of the ‘burden’ of her family. 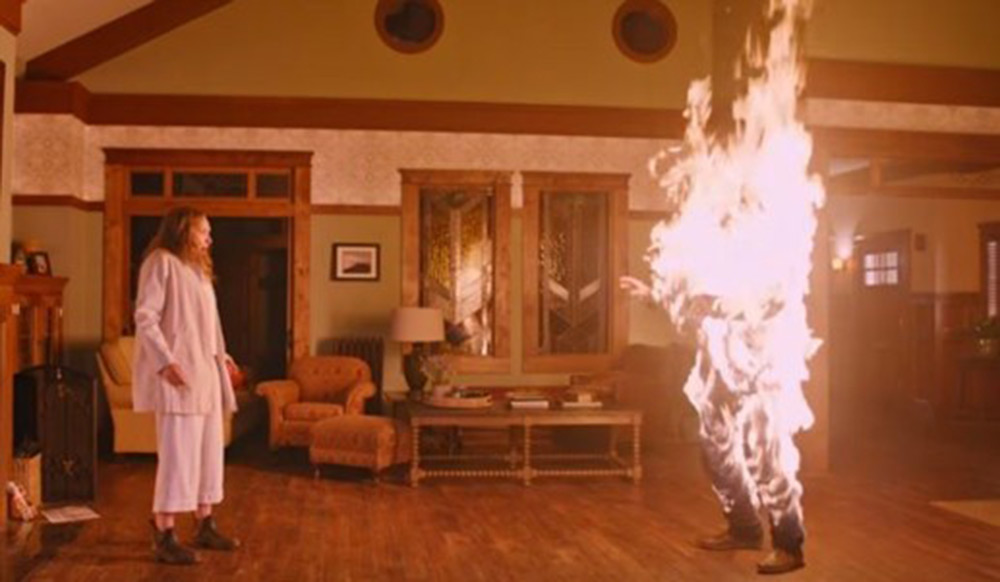 In both Rosemary’s Baby and Hereditary, the mother’s agency is limited. When Rosemary decides to get a new Vidal Sassoon haircut her husband declares it the “worst mistake she has ever made”. When she tries to read books about pregnancy she is told not to. When she voices her concerns about the neighbouring Satanists, she is ignored. She is finally double-crossed by her obstetrician, confirming her lack of power and agency.

In Hereditary, whenever Annie tries to do something on her own, she is challenged. When she attempts to conduct a ritual to contact the deceased Charlie, Steve questions her sanity and attempts to rush Peter back to bed, with the hope of him avoiding seeing his mother acting in such a hysterical manner. After Charlie’s death, Annie makes a sculpture of Charlie’s accident:

Steve: “Jesus Christ, Annie, are you planning on letting him see that?”

Annie: “It’s not about him, it’s a neutral scene of the accident.”

Annie is expected to put Peter’s feelings above her own. It is implied that she is monstrous for putting herself first, acting on her own feelings and impulses. In both films there is a pathologization of female agency.

At the end of Hereditary Annie commits suicide. In Rosemary’s Baby, Rosemary accepts the demonic child she initially rejected. It could be argued that both films could only make sense of these women by giving them wild and almost incoherent endings. Nevertheless, both films seem to imply that that there is no salvation for the involuntary mother.

Ansco Artworks: Lust for Life
Lust for Life, a 1956 biopic of artist Vincent Van Gogh, was shot on redundant film stock at director...
Read More
Crikey Moses! A Quick Look at the Making of The Ten Commandments (1956)
One special effect would dominate the film — the parting of the Red Sea. Julian Upton crosses Cecil B....
Read More
Offbeat Podcast
To coincide with the launch of the revised and updated Offbeat, a series of podcasts relating to the...
Read More
Last Night in Soho: In some ways surprising
Morgan Jones looks at Last Night in Soho to find a clumsy but unabashedly enjoyable psychedelic horror...
Read More
Carrying on in the country house: Andrew Sinclair’s Blue Blood
JENNIFER WALLIS on Andrew Sinclair’s 1973 film, Blue Blood, its real-life and fictional inspirations,...
Read More
“I ended up being in two of their films that night”
What is a custom movie? David Kerekes looks at Mail Order Murder: the Story of W.A.V.E. Productions and...
Read More
Fear Street: Part Three – 1666
In the final instalment of her Fear Street review trilogy, Lakkaya Palmer considers the history lessons...
Read More
Fear Street: Part Two – 1978
In her second blog on Netflix’s Fear Street trilogy, Lakkaya Palmer reviews the 1978 instalment, where...
Read More
Fear Street: Part One – 1994
It’s made a bloody splash on Netflix this July, but is the Fear Street trilogy just for kids? Lakkaya...
Read More
'As topical as tomorrow': Robert Fuest’s Just Like a Woman
Jennifer Wallis reviews Network’s newly-restored DVD release of Just Like a Woman (1966), and enters...
Read More