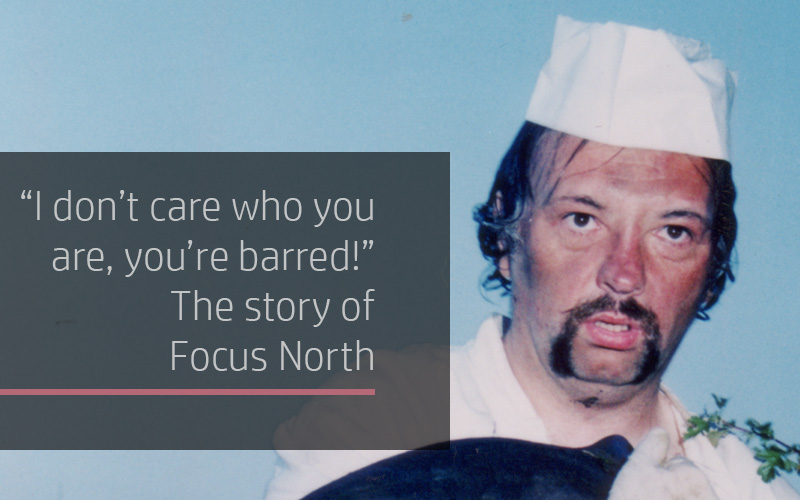 ‘I don’t care who you are, you’re barred!’ The story of Focus North

In this archive interview, Julian Butler talks about the pitfalls of leaping from no-budget filmmaking to a national television series. Smile Orange’s Focus North.

From the Headpress archives

Smile Orange are independent filmmakers from Yorkshire in the north of England. The Hunt for the Yorkshire Grimace (1996), one of their no-budget films, is the story of two down-at-heel northern comedians and the scrapes they get into trying to raise money while engaged in puerile nonsense. We at Headpress consider Yorkshire Grimace a benchmark in celluloid effluence. On the other hand, Fatliners (1990), a film Smile Orange made about time-travelling wrestlers (fashioned after World of Sport), is astonishing because it’s so rubbish.

As well as making no-budget movies, Smile Orange made a regional news spoof called Focus North. This ten-part series came and went on late night Channel Four in 1999. It remains a cult item that never happened, despite some highly memorable sequences, such as the pub-a-van report and an evening class for debt collectors.

HEADPRESS: Can you tell me a bit about Focus North? How did that come about?

JULIAN BUTLER: We’d been doing those real dirt-cheap feature films, as you know. When we were editing Fatliners, me and this guy called Gus [Bousfield] talked about doing a TV pilot, because although we did all right with the films, we felt we just weren’t getting anywhere. We decided to muck around with the fake mockumentary sort of stuff. There were a lot of people doing it, so we thought we have a go at it, and did a TV pilot called Focus North. We did a proper half-hour pilot, which took fucking ages, about a year or something. We made it with five grand lottery money we received to make a film called The Pike, which we never made. We sent the pilot to a group of people and there was no interest, until Channel Four and 4Later, the stuff Channel Four put on after midnight. The commissioning editor was from Huddersfield and wasn’t from a TV background either, so was a bit more sort of open to stuff. At the first meeting he goes: “I want you to make ten episodes and we’ll give you ten grand an episode.” I remember writing it down whilst he was still talking. We were trying to keep a straight face and we were writing the amount we were going to get, like 100 grand.

HEADPRESS: Pretending to ponder on it?

JULIAN BUTLER: Well, we went back and negotiated and got two grand more. I just remember writing it on a piece of paper and showing it to Bob [Priestley], whilst we pretended to ponder over it. Then we just went straight into it, really. Bob and Gus had just left their jobs; they were down in London and came back up here to Yorkshire. I wasn’t working at the time, so I was alright, and I launched into it. But I remember one problem right at the beginning was that Channel Four wanted ten episodes. This was in May or June, and he wanted them by December. We were like, oh easy, easy. We started doing a schedule we spoke to him a week later and he said: “No, I want them all broadcast by the end of December.” So we had to knock two and a half months off the schedule.

HEADPRESS: Did you manage to film all ten?

JULIAN BUTLER: Yes, we did them all.

HEADPRESS: What kind of reaction did Focus North receive?

JULIAN BUTLER: They were doing well. They were getting good ratings and stuff, because they came straight after TFI Friday, which is weird. I think we just got a load of people drugged out from that. There was one person who believed one of the stories. The story was a piss-take of those road protesters: the council were drilling in a graveyard and had mistaken these bodies in the cemetery for road protesters. So they were digging up the corpses in the graveyard and arresting them and that sort of stuff. Some guy wrote in to say he watched it twice: when it first went out and when it was repeated. He said he watched it and his mother watched it and they were both shocked by it. He couldn’t believe this was for real. The guy who was in charge of the cemetery loved it, though. I remember him saying when we arrived: “Well lads, you can have run of graveyard, whatever you want. There’s an open grave over there. You can go in if you want but keep a couple of feet away from the coffins.” He was really into it; this guy was just wrong!

HEADPRESS: Can you remember much about the writing process?

JULIAN BUTLER: Fucking, just mental, just like a month of just going mad. It was twenty hours a day towards the end of it. Two computers, shouting and stuff.

HEADPRESS: I wouldn’t describe Focus North as comedy as such. You don’t sit there and go ha ha ha. The way I would describe it to somebody is “anti-comedy.”

JULIAN BUTLER: You mean it’s not funny then? When we were writing, we were laughing at bits I guess, but like you said, you’re not pissing yourself. I think the problem is that a lot of it is in-jokes. We’re not writers, not really. The three of us have known each other since school. There are so many references, and we find them funny, but to other people it’s just a barrage of… And then they get the odd gag.

HEADPRESS: You manage to pull it off well; you’re very straight faced about it.

JULIAN BUTLER: I think that’s the only way to do it. We wanted it to look like the original Calendar basically, or Edit 5, a late-night Yorkshire TV programme that went out at eleven thirty and just featured stories from the community. And the story we were most inspired by was about this minstrel, an Al Jolson impersonator called Clive Baldwin. He was from Hull, and he talked in an Al Jolson voice, even when he wasn’t blacked up. The programme promoted him; that was what was funny. You’re from Hull! What the fuck are you doing? We realised all these programmes are based on the principle that this person is good because he comes from where you’re from. This guy was blacked up, but they say: “Aw, look how well he’s done, he’s from Hull. Brilliant. Well done.”

HEADPRESS: What happened after those ten episodes?

JULIAN BUTLER: Fuck all, basically. We had to start a company, so that’s when Smile Orange became Smile Orange Limited and then, due to massive mismanagement, we got in loads of debt. We were like, forty-five grand in debt to the tax man.

This interview originally appeared in Headpress 28. For more about Smile Orange, Focus North and no-budget filmmaking, check out the Headpress book, The Wisdom of Stupidy.

David Kerekes founded Oil On Water Press and is one of the founders of Headpress. He has written extensively on popular culture, is co-author of the books Killing for Culture and See No Evil, and author of Mezzogiorno, a meditation on life and Southern Italy.
Posts by this Author
PrevPreviousThe Involuntary Mother in Rosemary’s Baby & Hereditary
Next‘As topical as tomorrow’: Robert Fuest’s Just Like a WomanNext