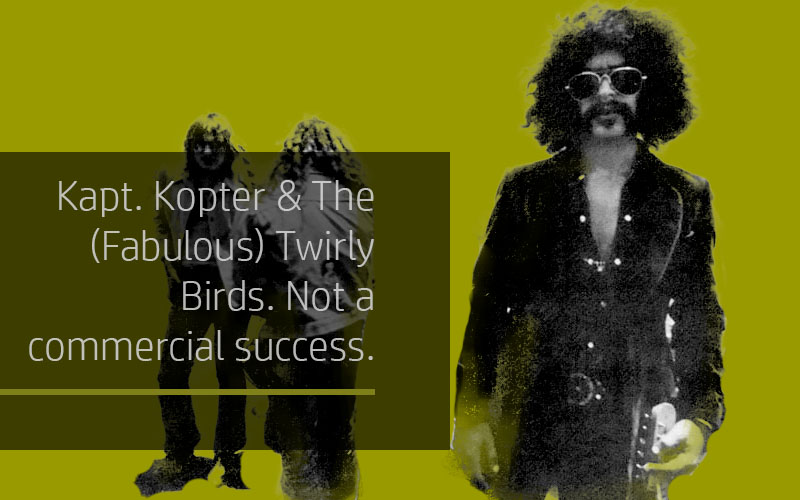 Gareth Wilson has never really connected with a lot of ‘psychedelic’ music. But he does like Kapt. Kopter & The (Fabulous) Twirly Birds.

Three days after the release of Sgt. Pepper’s Lonely Hearts Club Band, The Jimi Hendrix Experience took to the stage of the Saville Theatre in London and launched into a blistering cover of the title track. The Beatles had binned touring by this point, so there is a good case to be made for this being the first live performance of the song anywhere in the world. The original is recognisable from the cover version, certainly, but the sheer gleeful abandon of the divebombing, throbbing din Hendrix throttles out of his guitar within seconds of the show beginning is much more fun.

We used to have a pink fridge magnet on which was drawn a yellow cartoon rabbit, grinning maniacally, captioned ‘I like it sloppy and weird.’ This pithy maxim more or less sums up my preferred settings for guitar music. Give me the churning squall of a Crazy Horse grungefest or the howl of J Mascis in full flight or Rory Gallagher blasting ‘Moonchild’ at Montreux in 1985 over something more technically accomplished any day. Uninhibited, elemental, and dirty, dirty, dirty; tapping the source; ragged glory. 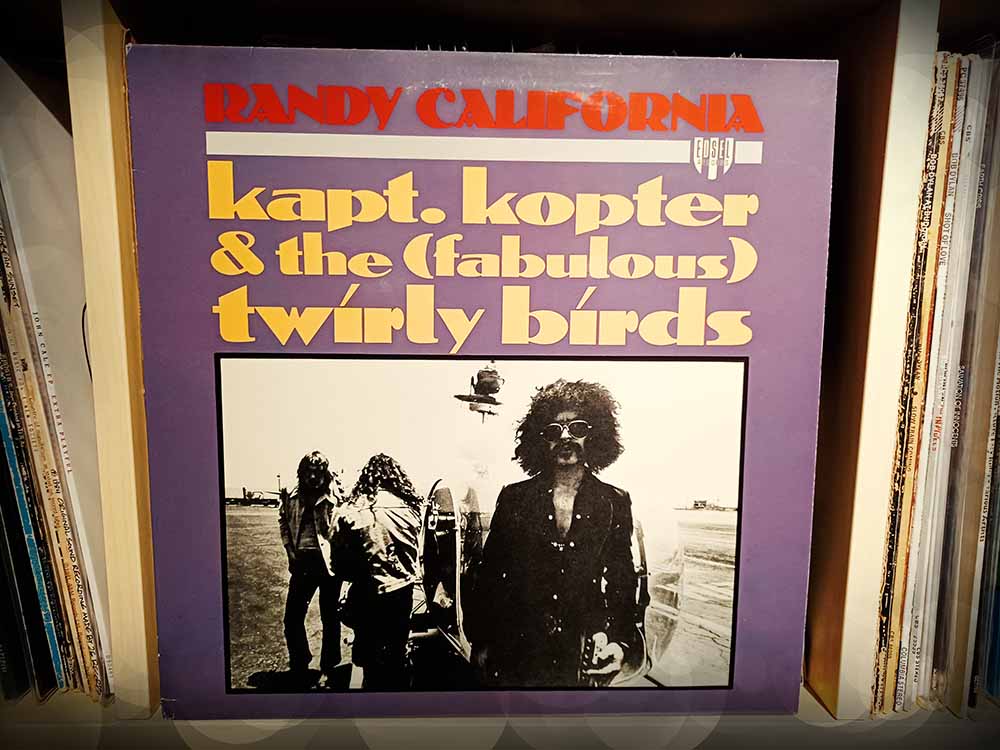 I think this is why I’ve never really connected with a lot of ‘psychedelic’ music. Heresy no doubt, but The Beatles don’t really do it for me. The Grateful Dead, Hawkwind, nah….they never sounded as good in reality as they did in my head before I’d ever heard anything by them…13th Floor Elevators are more like the thing, but I’d rather crank up Flamin’ Groovies or Blue Cheer for some garage bludgeon than go anywhere near  Through-The-Looking-Glass-Perfume-Garden-Tolkien-pastoral whimsy. There’s something timelessly primal about unadorned, blisteringly loud guitar workouts that doesn’t date as harshly as flash studio-bound creations. Even with Hendrix, I’ll reach for the live stuff nearly every time. And if you’re going be a bit quieter, but still want to do weird, at least do it right…*

No doubt there is plenty of written speculation out there about what the later Beatles material would have sounded like live; I am reliably informed that Let It Be is essentially a glorified live album, but have never felt compelled to check it out. But that’s not to say all is lost. Returning to the Saville Theatre in 1967 for a moment, on Hendrix’s left, playing bass, was Noel Redding. Five years later, under the pseudonym Clit McTorious, Redding appeared on three tracks on the debut solo album by former Spirit guitarist Randy California. Kapt. Kopter & The (Fabulous) Twirly Birds grew out of live jam sessions in Topanga Canyon clubs. It was not a commercial success. It is, however, an essential listen. Tight but loose, loud (the production is superb), wah-wah-infused and downright funky in places, it has the occasional studio embellishment like backwards masking on ‘Things Yet To Come’, but you’d be hard pushed to call it polished. It’s sloppy, and weird, and I love it. 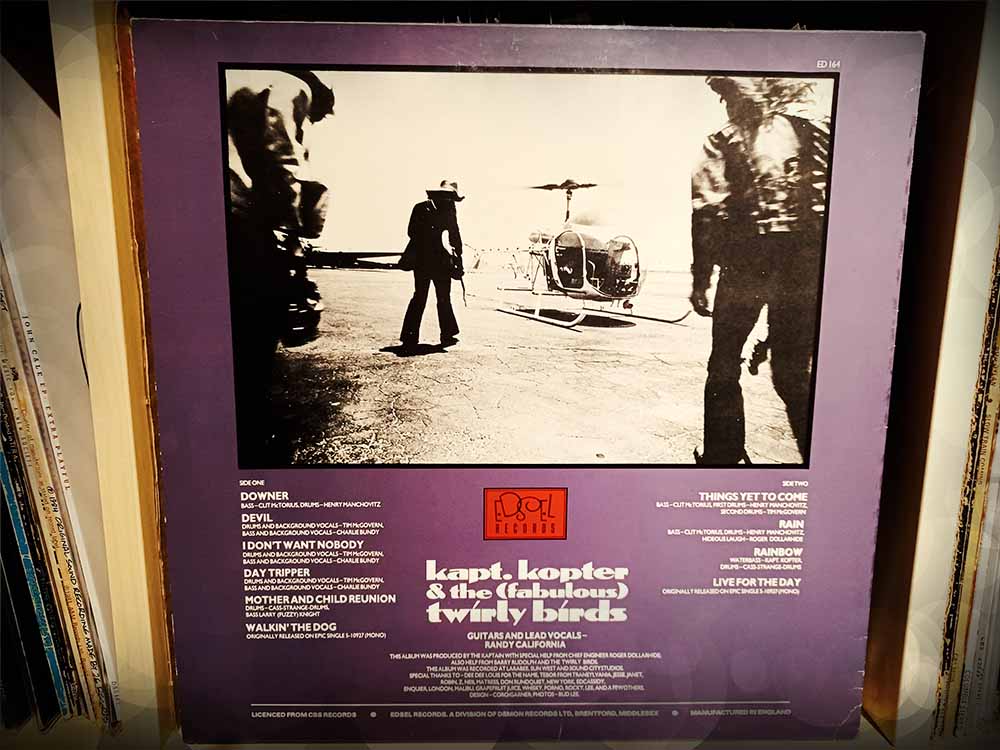 The album oozes rehearsal-room dank; you can practically smell the mildew and rollies and ropey hash, and picture the piss-filled beer bottles in the corners. Is it psychedelic? Who cares. It certainly sounds woozy and smoked-out, and pretty much exactly how you’d hope music made by the dudes on the album cover would sound. Hair, denim, biker boots – none of your kaftans and sandals. It’s 1972! Hippy wigs have been on sale in Woolworths for two years now! Jimi, Janis, Jim, Manson, Altamont; forget the Age of Aquarius. Like the man said, ‘I’m coming down fast’.

Opening track ‘Downer’ confirms this mood, the first line of the album a declaration by California that ‘I’ve been on a downer too long’ while Hendrix-infused riffs twitch and skitter over a monstrously thudding rhythm section. This is proper power trio stuff; the sound is propulsive and full while also somehow maintaining a sense of space. Nothing is superfluous, nothing is wasted (apart from maybe the listener). I don’t want to underplay the Hendrix-isms, by the way. The teenage Randy played in Jimmy James and The Blue Flames, Hendrix’s band in New York in the late 60s, and it was Jimi himself who bestowed the California surname on the kid born Randy Wolfe. There is a debt in the sound, without a doubt, but not in a bad way; the songs are a bit more freeform and the shredding doesn’t aspire to quite the same level of carnage as his mentor achieved. I guess everyone knows their limits. 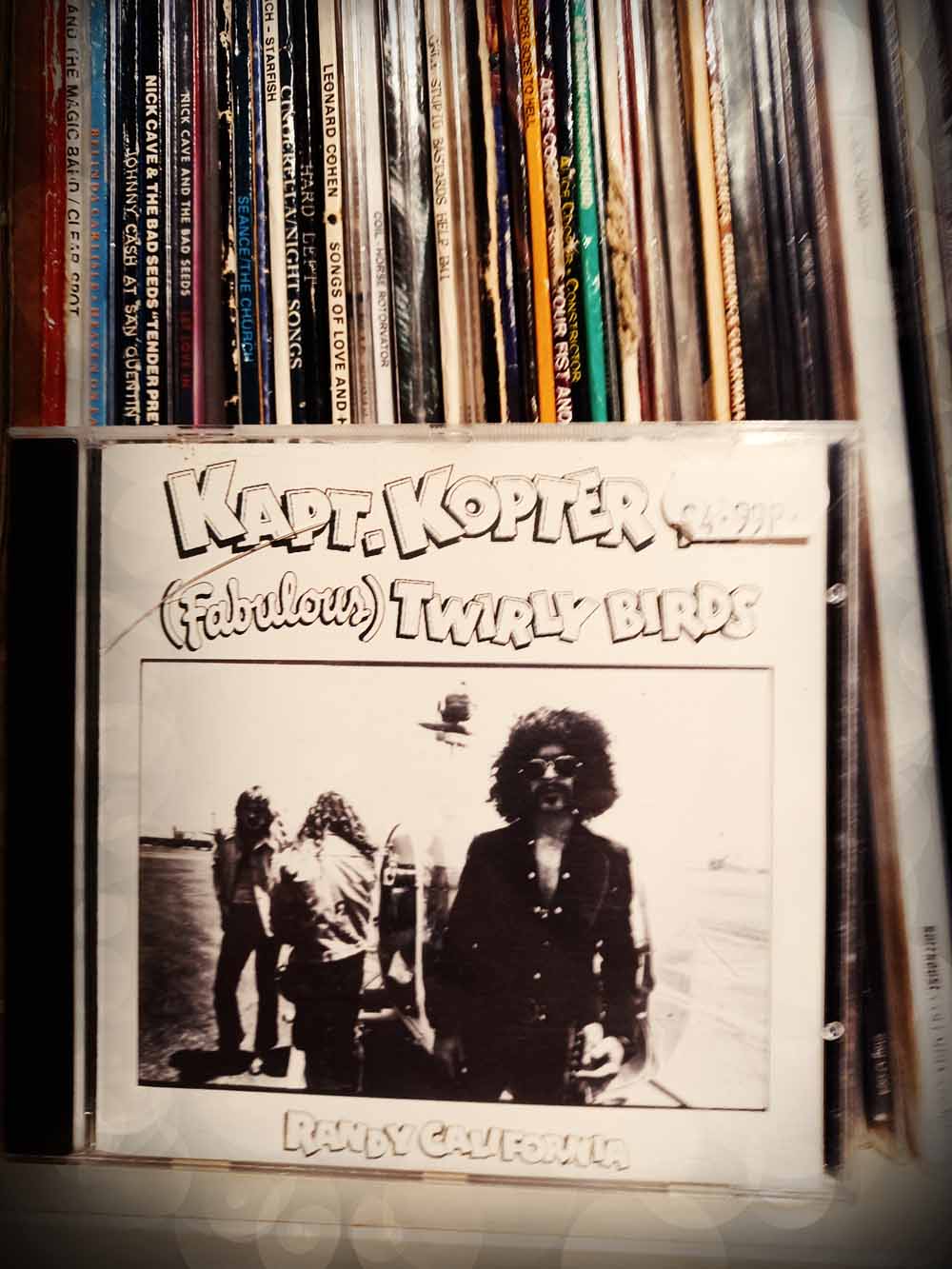 This isn’t really a ‘statement’ debut solo album. There is no real theme as such, beyond being a collection of cool jams. In fact, much of it consists of covers, albeit gnarly and fuzzed out in awesome ways that the original composers James Brown, Paul Simon and, um, Sweathog (nope, me neither) probably never anticipated. There are two other covers, though: ‘Day Tripper’ and ‘Rain’, and if The Beatles had kicked out the jams like this then I’d be an instant convert. The former is wired on pills before lunchtime; the latter is probably still stumbling around Woodstock, surviving on psilocybin and protesting the Vietnam war. My sweet lord is ‘Rain’ good. If New Riders Of The Purple Sage lived in a bayou shack they might have recorded the stupid little intro, and then we’re off, waving our freak flag higher and higher and higher, gonzoid guitar hacking and slashing and realigning our chakras as our souls bleed out of our ears at the volume at which this demands to be heard. ‘Might as well be dead’? Well, fuck it, cool, at least the tunes were righteous.

Randy California passed away in 1997. His son caught a riptide while in the Pacific Ocean near Hawaii; Randy was able to save him but drowned in the process. He was only 45. Discogs lists 27 different versions of Kapt. Kopter; it looks like it has been reissued fairly consistently across several territories. If it appears in your local independent record shop, give it a blast. Your soul and Spirit will love you.

*Comus – ‘First Utterance’ and The Wicker Man soundtrack; job’s a good one.

Gareth Wilson thinks he'll pack it in and buy a pickup.
Posts by this Author
PrevPrevious‘I press the shutter and it’s my way of saying WTF’
NextLast Night in Soho: In some ways surprisingNext

Teresa’s Records
Gangsters seek refuge and lose themselves in Cul-de-sac, a 1966 film by Roman Polanski. But what is on...
Read More
When Folk Got Its Funk On
Traditional folk music with a peppermint flavour. David Kerekes reviews Deep In The Woods: pastoral psychedelia...
Read More
Recognition Of Fertility Gods: Gathering Of The Tribe Playlists
Curated tracks from material that features in the series, Gathering of the Tribe. Features drug music,...
Read More
JOHN CALE IN THE ’70s
In the mid-70s, John Cale released three albums on Island Records. It's an exceptional period for the...
Read More
New Year, New You: 100 ways to improve your life
From fun with mould to making it Halloween all year round, Wallis and Wilson offer you 100 ways to almost...
Read More
A Big Bad Beautiful Noize
The day the world turned GREBO! Author Rich Deakin talks about Gaye Bykers on Acid, Crazyhead, Leicester,...
Read More
Hoagy Carmichael's Music Shop
The Stark Reality...Discovers the Hoagy Carmichael Music Shop is without doubt one of the strangest records...
Read More
In Praise of Noise: The Deafening Silence of the Pandemic
The pandemic has made the world a quieter place. Jennifer Wallis misses the noise, and writes here about...
Read More
“Sparky! Oh, Sparky!” The Charm and Chill of Children’s Records
Jennifer Wallis explores the history of children’s records, and childhood encounters with a sinister...
Read More
33 Trapped Chilean Miners
We were recently prompted to dig out this short interview from the archives. SIMON MORRIS, perhaps best-known...
Read More