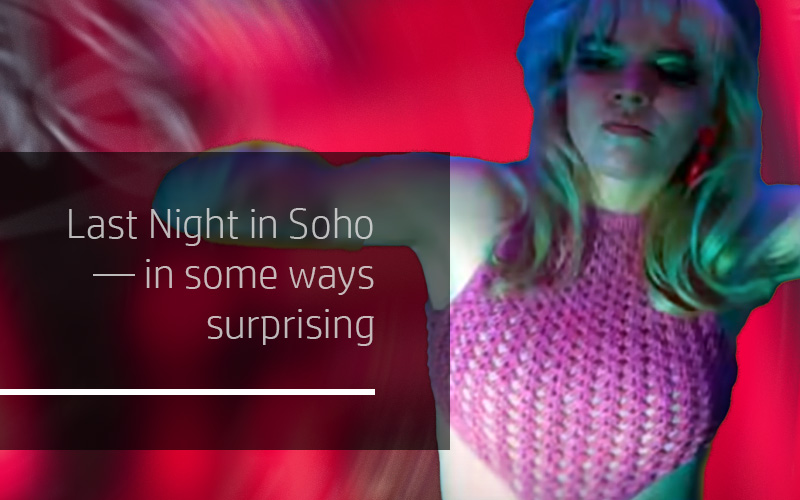 Morgan Jones looks at Last Night in Soho to find a clumsy but unabashedly enjoyable psychedelic horror film about gender.

Shaun of the Dead (2004), Hot Fuzz (2007), Baby Driver (2017)… There is not much politics or indeed gender politics in the films of Edgar Wright; it’s an oeuvre primarily concerned with men and male friendship (generally friendship between men who collect comic books), where women usually play supportive roles. As such, the fact that Wright’s latest film Last Night in Soho (2021) is, essentially, a horror film about gender, seen from the perspective of young women, is in some ways surprising. The film follows 60s obsessed Eloise (Thomasin McKenzie) as she moves from rural Cornwall to London to attend the London College of Fashion. The first indication of what kind of film Last Night in Soho is comes when, in an unsettling scene, a newly arrived Eloise takes a taxi from the station to her halls and the driver’s line of questioning quickly moves from innocuous to deeply creepy. The way this interaction turns on a dime sets the tone for much of the rest of the film, where smiles become leers and the line “you know where to find me” can be both flirtatious and fearful.

Eloise quickly finds halls (more specifically her party girl roommate Jocasta, played very entertainingly by Synnove Karlsen) not to her liking. Moving into a bedsit on Goodge Street let by Ms Collins (Diana Rigg in her last role), the psychically attuned Eloise begins to see the life of Sandie, an aspiring singer who lived in her room as the 60s swung, playing out in a series of nighttime visions. As Sandie’s aspirations come up against some very harsh realities, past and present begin to blur for Eloise.

Despite its often grim subject matter, Last Night in Soho is an unabashedly enjoyable film. Tonally, it is something like Attack the Block (with which it shares some DNA — not least the appearance of Michael Ajao as Eloise’s good natured classmate John, who featured in Attack the Block as pre-teen vigilante Mayhem), where moments of humour and a faintly garish, comic book sensibility cushion a real, gristly unpleasantness. Its early depictions of 60s London are enchanting, and I can imagine it would be hard to watch a scene where Anya Taylor Joy as Sandie and Matt Smith as her love interest, Jack, dance at the Café de Paris without a massive grin on your face; the outfits, the music, the whole thing is just wonderful. But even these lush scenes have an edge to them; Edgar Wright has discussed how in the making of the film 60s starlet Diana Rigg outlined her experiences as a teenage attendee of the famous venue, feeling simultaneously wonderful and “like a piece of meat” keenly watched by “rheumy eyed men”. Matt Smith as Jack —  a manager who very much does not have Sandie’s best interests at heart —  is particularly good at illustrating what might be the through line of the film: the way in which charm bleeds into sleaze, and situations which may initially seem appealing reveal themselves to be rotten. After Eloise takes a job at a pub (run by the ever-charming Pauline McLynn), her encounters with a regular played by Terence Stamp, who may or may know something about Sandie’s fate all those years before, have about them a particular queasy accuracy about the way old men often talk to young women.

Does a film being about gendered violence make it feminist? Last Night in Soho has a pulpy twist that sees it lurch in the direction of that claim, a twist which I am not sure entirely worked. Its portrayal of London as being a place where, for women, possibility diametrically balances with threat certainly seems to make it topical, tapping into conversations about street harassment and women’s safety at night that have come in the wake of the murders of Sarah Everard and Sabina Nessa. Ultimately the story of Eloise and Sandie does not have a lot to say about the world it depicts; if this is the first of Edgar Wright’s films that you could (tentatively) describe as having politics, they are somewhat clumsy, and very much nascent. Wright’s skills as a filmmaker, however, are not, and there is still something refreshing about seeing a certain kind of familiar seediness rendered on the screen. I used to work behind the bar in a pub that traded on its reputation as the watering hole of 60s gangsters, and dead-eyedly told countless old men that the murder had happened right there while they looked at my chest; perhaps I was always the target audience for this film, but I can’t imagine anyone would come away empty handed.

Morgan Jones lives in London and writes about politics and culture. She allegedly works for the Labour Party.
Posts by this Author
PrevPreviousKapt. Kopter & The (Fabulous) Twirly Birds. Not a commercial success.
NextNew Year, New You: 100 ways to improve your lifeNext

Criswell’s Hall of Shame: Crimes Against Womanhood (Criswell Predicts Women’s Lib!)
Among his many predictions, Criswell often returned to one particular forecast: womankind’s domination...
Read More
Teresa’s Records
Gangsters seek refuge and lose themselves in Cul-de-sac, a 1966 film by Roman Polanski. But what is on...
Read More
Figures in the Landscape: Rituals, Wilderness, and Canadian Cinema
Jennifer Wallis watches Rituals (1977) and explores Canadian wilderness on film in the tax shelter era.
Read More
Ansco Artworks: Lust for Life
Lust for Life, a 1956 biopic of artist Vincent Van Gogh, was shot on redundant film stock at director...
Read More
Crikey Moses! A Quick Look at the Making of The Ten Commandments (1956)
One special effect would dominate the film — the parting of the Red Sea. Julian Upton crosses Cecil B....
Read More
Offbeat Podcast
To coincide with the launch of the revised and updated Offbeat, a series of podcasts relating to the...
Read More
Dangerous Encounters: The Horror Film Fanzine as a Subversive Art
A single staple is the most primitive of zine bindings. Find out why Colton Cobb's Dangerous Encounters...
Read More
Carrying on in the country house: Andrew Sinclair’s Blue Blood
JENNIFER WALLIS on Andrew Sinclair’s 1973 film, Blue Blood, its real-life and fictional inspirations,...
Read More
“I ended up being in two of their films that night”
What is a custom movie? David Kerekes looks at Mail Order Murder: the Story of W.A.V.E. Productions and...
Read More
Fear Street: Part Three – 1666
In the final instalment of her Fear Street review trilogy, Lakkaya Palmer considers the history lessons...
Read More