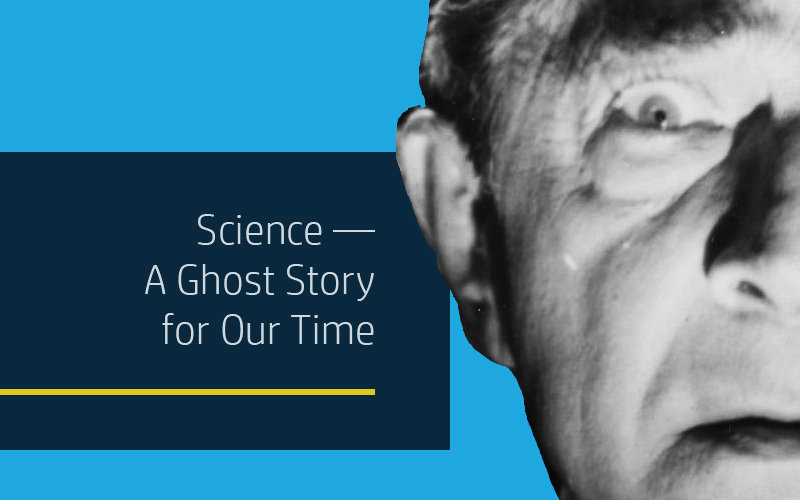 Science — A Ghost Story for Our Time

A paranormal experience leads David Kerekes to consider two magazine subscriptions and 'reality' as a metaphor for the human condition.

When I was twelve, I had a paranormal experience. I’ll get to it in a minute. First, the Fortean Times, the magazine of strange phenomenon, a copy of which I picked up this morning: I once subscribed to Fortean Times and looked to it fondly as a gazetteer of marvels, a grownup variant on those books that offered children at the turn of the last century a glimpse of an exciting, wider world (tall buildings, steam locomotion, Spain, France). But this was the first copy I had bought in a long time.

I also once subscribed to another magazine, New Scientist, which seemed for a while a logical extension of Fortean Times, in that science and technology were the new apocrypha and things rumoured to have happened in the pages of Fortean Times became, in New Scientist, things that in theory would one day probably happen. I tired more quickly of New Scientist, each new theory of the God Particle or Black Holes becoming much like another. More than that, it seemed as if New Scientist operated  in a state of denial, excluding the humanities and ‘magic’ (anything not science) while promoting ideas that would once have been heretical. Questions on the nature of reality appear a lot in New Scientist, which is a repository of esoteric thought only a little different to that of ancient grimoires.

Flashback to my paranormal experience. In the mid-1970s, I lived with my brother and parents in a two-up, two-down semidetached house in the north of England. This particular evening I was alone in the house, when something moved past my slightly open bedroom door. I thought it was my brother, Gino, come home quietly; I recognised the stripes of his t-shirt as he passed by. Having checked, however, I found the house was still empty. Moments later I heard someone call my name. I had a friend, Andy, who often took a shortcut whenever he came to visit, arriving via the fields at the back of the house. It was Andy calling my name, loudly and plainly from outside. Dave! Dave! Dave! He stopped when I checked and opened the door. There was no one there. Could Andy have run off? He wasn’t the most agile friend and there was a lot of ground to cover without being seen — so, no, he hadn’t run off. I was rattled; first, an inexplicable visual event followed by an inexplicable aural one. I spent the rest of the evening with all the lights and the television on, waiting for the rest of the house to return.

I picked up the Fortean Times today because of a cover story on screenwriter Nigel Kneale, who penned Quatermass and The Stone Tape and, according to Mark Gatiss, invented modern television. The article was in celebration of Kneale’s centenary, coinciding with a day-long celebration of all things Kneale at Crouch End Picturehouse in London (23 April 2022). As I say, I enjoy the magazine, but my interest is not what it was. The paranormal still holds a fascination but my resolve to listen to theories about it has weakened, and I prefer to ‘accept’ the unexplained rather than debate its veracity (unless in a pub with a pint in hand).

Asked whether he believed in God, comedian Jerry Sadowitz had the right attitude. He said he did believe in God, that he considered God to be a man with a long beard who sits in Heaven on a throne and is fucking great.[1] I consider UFOs, the Bermuda Triangle, and other mysteries in a similar light.  I don’t consider a mystery to be necessarily over because it’s been debunked, but rather it continues to be a potent force in our imaginations, as would any powerful image or idea.

Where is that boy of twelve? What does he want? Writing this is a form of reckoning, a catharsis, say of it what you will. My younger self is submerged in time but sometimes, from that place where ghosts speak, he calls my name. Dave! Dave! Dave! A head’s up? A warning, perhaps? Our world today is one detached from its moorings, its waters choppy, full of lands ruled by mad conspiratorial gods. However, this much I already know.

Older now, not necessarily wiser, I consider my ghost to be a metaphor for uncertain times and my own troubled place in it, by that I mean I am writing this while dealing with personal emotional upheaval (the nature of which is irrelevant). My biggest fears at twelve were the possibility of a zombie apocalypse and Dracula snatching me from my parents and dragging me to Transylvania, one haunted step at a time. Nothing existed of ‘fake news’ or mad-hatter world leaders. The Patsy in the biggest conspiracy was the one who carried the smoking gun. He sat in a book depository and was fucking great. Tantalising clues pointed to a mirrorball ‘truth’ but at least with Lee Harvey Oswald and JFK we knew what we were looking for.

Me at twelve, me a ghost. In times of emotional upheaval, facing the unknown, I subconsciously turn to my paranormal experience as a safety net, finding solace in something more distant and unknown than the things that surround me now. The paranormal is the recognition of our shortcomings as a species — this is reason enough for it to exist. Somewhere I am me at twelve, an echo in the walls, a Nigel Kneale conceit but without the cheesy VFX. My ambitious adult self feels it could tell my younger self a thing or two but what could I possibly want to know at that age that didn’t involve zombies and Dracula? I call him anyway, that’s me outside the bedroom window, pretending to be Andy, that’s me walking past the door. This much I learnt from my brief visitation: Do not question the unknown because the unknown isn’t the one searching for answers.

When you next watch the 1953 Ed Wood movie, Glen or Glenda, consider the scene where Bela Lugosi looks down on a busy street. “People!” he says in his rich Hungarian accent, “All going somewhere!” He laments that among these people are some who happen to be right but are also wrong, and those who are wrong but are often right. He becomes angry, jerks a hand, a fragile puppet master on his comfy throne. “Pull de string! Dance to that!” The scene is over too quickly, so do as I do and loop it, underscore Bela with a new musical soundtrack, System of a Down screaming how science has failed us and Spirit moves through all things. It’s not what you might call a scientific process but it rings true nonetheless.

David Kerekes founded Oil On Water Press and is one of the founders of Headpress. He has written extensively on popular culture, is co-author of the books Killing for Culture and See No Evil, and author of Mezzogiorno, a meditation on life and Southern Italy.
Posts by this Author
PrevPreviousWhat is an Offbeat film?

What is an Offbeat film?
Julian Upton talks about obscure British movies and their part in his book, Offbeat: British Cinema’s...
Read More
My Bones and My Flute: Remembering Edgar Mittelholzer
David Kerekes explores childhood and two novels by Edgar Mittelholzer, My Bones and My Flute and The...
Read More
Dangerous Encounters: The Horror Film Fanzine as a Subversive Art
A single staple is the most primitive of zine bindings. Find out why Colton Cobb's Dangerous Encounters...
Read More
New Year, New You: 100 ways to improve your life
From fun with mould to making it Halloween all year round, Wallis and Wilson offer you 100 ways to almost...
Read More
‘I press the shutter and it’s my way of saying WTF’
"A sense of permanence, like an old idea of a dystopian future," is how David Kerekes describes the photographs...
Read More
‘Strangehaven? Can’t even find Strangehaven on this bloody map…’
An archive interview with Gary Spencer Millidge about the strange village of Strangehaven, now a milestone...
Read More
“I ended up being in two of their films that night”
What is a custom movie? David Kerekes looks at Mail Order Murder: the Story of W.A.V.E. Productions and...
Read More
A Big Bad Beautiful Noize
The day the world turned GREBO! Author Rich Deakin talks about Gaye Bykers on Acid, Crazyhead, Leicester,...
Read More
'As topical as tomorrow': Robert Fuest’s Just Like a Woman
Jennifer Wallis reviews Network’s newly-restored DVD release of Just Like a Woman (1966), and enters...
Read More
‘I don’t care who you are, you’re barred!’ The story of Focus North
In this archive interview, Julian Butler talks about the pitfalls of leaping from no-budget filmmaking...
Read More