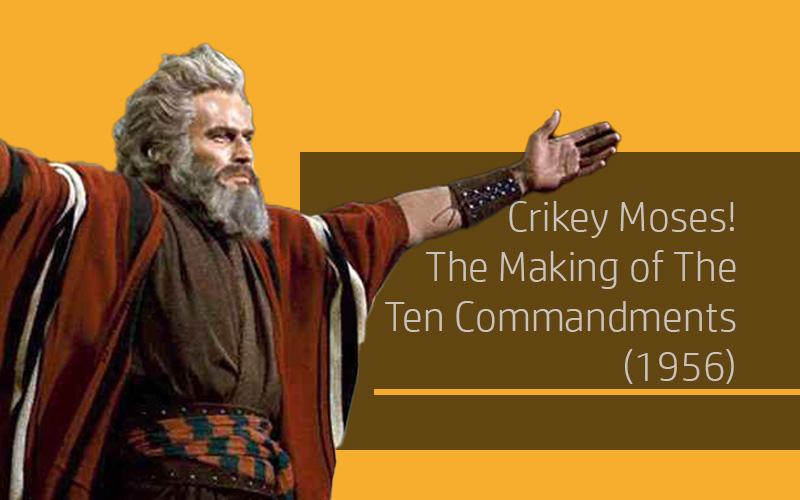 Crikey Moses! A Quick Look at the Making of The Ten Commandments (1956)

One special effect would dominate the film — the parting of the Red Sea. Julian Upton crosses Cecil B. DeMille's Biblical 1956 epic, The Ten Commandments.

When Cecil B. DeMille began making films in 1913, they were silent, black and white and hand-cranked through the camera. When he directed his last film, The Ten Commandments (1956) — the story of the life of Moses — he had VistaVision, colour, blue-screen special effects and 6-track stereo sound at his disposal. Hollywood movie making had transformed during his career — and he had helped to transform it —from a seat-of-the-pants, vaudeville enterprise for wandering showmen and pioneers to a lavish, multimillion-dollar industry at the forefront of modern technology and culture.

By the mid-1950s, DeMille was the industry’s most famous director. He was a household name. On set, he wore the jodhpurs, he held the megaphone, and he barked his own commandments from high above, usually seated on a 50-foot crane or standing atop a studio-built clifftop. He had developed a reputation for producing extravagant Biblical epics with the proverbial cast of thousands. In fact, as Simon Louvish points out, only a handful of DeMille’s 70 feature films can properly be called epics, and even fewer can be called Biblical epics — the two versions of The Ten Commandments (1923 and 1956), The King of Kings (1927) and Samson and Delilah (1949)[i] — but at this stage of his career, DeMille was happy to play up to the image. Indeed, it was Samson and Delilah, which critics despised but the public adored, that had recently restored his fading power in Hollywood. The circus spectacular The Greatest Show on Earth (1952) cemented his revived standing and won the Best Picture Oscar. Now in his advancing years, the director resolved to give the public more of what they wanted — and create the ultimate Cecil B. DeMille epic.

The Ten Commandments was a huge undertaking for young director, let alone one in his seventies. DeMille spent years on pre-production. In September 1954 he led a special unit to Egypt for three months of location shooting. With four heavy VistaVision cameras in tow, they headed first to the slopes of Mount Sinai. The camels transporting the equipment could only make it halfway up the mountain, so the equipment was broken down and carried the rest of the way by the crew. After each day’s shooting, exposed film was trucked back to Cairo in a ten-hour drive; the truck would then turn around and make a 15-hour return journey uphill to collect the next day’s rushes. Film cans were packed in dry ice and shipped from Cairo to Hollywood, where they were processed and then flown back to Egypt four times a week for DeMille’s inspection. The spoiling effects of the baking heat and the dust storms meant that the VistaVision cameras had to be cleaned and adjusted by a specialist maintenance crew at the end of each day’s use.[ii]

To shoot the Exodus of the Children of Israel, DeMille employed 25,000 extras and 15,000 animals in a desert location that spanned three miles. He herded the vast crowds by loudspeaker and short-wave radio from the top of a crane. All this would take its toll on DeMille. The 73-year-old director suffered a heart attack towards the end of the location shoot. Keeping the incident quiet, the crew managed to finish the work and DeMille went home to recuperate. Back in Hollywood, he was soon recovered enough to commence the 117-day studio shoot. After wrapping this, there would be 14 months’ post-production work to complete.

The amount of effects work needed for The Ten Commandments, led by John Fulton, was unprecedented. (Fulton would win the film’s only Oscar.) But one special effect would dominate all the others, and indeed would dominate the film itself — the parting of the Red Sea. In DeMille’s earlier, silent version of The Ten Commandments, the director had parted the Red Sea triumphantly by the cinematographic standards of 1923.[iii] But he resolved to do it much more spectacularly a second time. (Wags noted that even God had only parted the Red Sea once.) A colossal tank with a wide trough running through the middle was constructed on the Paramount studio backlot. It was so huge that the fence separating the Paramount and RKO lots had to be taken down to accommodate it. Hundreds of thousands of gallons of water were released into each side of the tank. Powered by wind machines, the water cascaded towards the central trough and rushed over the edges to fill it, all of which was captured by four high-speed VistaVision cameras. On reversing the footage, instead of flooding towards the middle, this ‘sea’ looked to be sweeping apart.

To create the giant walls of water that stand aside for Moses and his people as they cross the parted sea, thousands of gallons were again released from elevated tanks, this time onto a huge ramp measuring 80 x 32 ft. The resulting shot of water crashing down the ramp was turned upside down and looped in the lab to give the effect of the water reaching upwards; the shot was and duplicated and reversed for the opposite wall of sea. These efforts were just part of the raw material for the final effect. They were combined with shots of miniatures, location footage from Egypt and travelling mattes of portentous, billowing clouds to build a final composite effect that comprised around thirty separate elements. In total, the Red Sea sequence took six months to film and cost $1 million. There had never been a special effect like it.

The Ten Commandments’ parting of the Red Sea was such a marvel in 1956 that even people who struggled to sit through the rest of the film felt they’d got their money’s worth. It wasn’t particularly realistic, but it was awe-inspiring. Sixty-six years later, the scene retains a visceral, tangible majesty that computer-generated imagery has never really matched. Instead of growing quaint like a lot of antiquated special effects, it looks now like some kind of bold, large-scale video-art, near-parodic in its religious fervour but still thunderously intimidating as a slice of spectacle.

The Red Sea sequence is at odds, however, with some of the other effects work. While The Ten Commandments was, in many ways, a state-of-the-art enterprise, in others it is a crude hotchpotch of gaudy imagery. Certainly, the scenes with traditional animated effects, such as the wall of fire that obstructs Pharoah’s pursuit of Moses towards the shores of the Red Sea, look uninspired and rather lazy. Similarly, the roughness of the blue-screen shots often shows up like a sore thumb. The unevenness of these studio shots against the matted-in location footage was further illuminated by the pristine 2011 restoration of the film. While the Egypt footage captured under great duress by Director of Photography Loyal Griggs and his crew is itself magnificent, too often it is relegated to the background of a composite shot, where it becomes muddy and hazy. The beauty of the location footage is not really showcased until the film’s third hour.[iv] Moreover, the pin-sharp studio-shot scenes serve to betray the artificiality of the interiors. The bright VistaVision glare adds a sparkly, pantomime finish to the bling, highly polished floors and the lavish costumes by Edith Head; it’s an aesthetic that was more at home in the expensive musicals of the day. Perhaps VistaVision’s glittering sheen required bolder handling to draw out its potential.

But such criticisms are, and always were, pretty irrelevant. While The Ten Commandments’ acting is grandiose and much of the dialogue is laughably portentous, DeMille had long given up caring about what the critics thought about his films. He made movies for the God-fearing public, movies that packed out houses in small-town America. The dumbest person in the audience could follow them. Generations of children have sat happily through the nearly four-hour Ten Commandments, which says something about DeMille’s genius for storytelling. And Paramount would recoup the film’s huge $13-million-dollar budget in the US in one year (10% of the gross coming from just one cinema, the Criterion in Manhattan[v]). The film would go on to make $100 million worldwide, a staggering haul in the late 1950s. It was, commercially, the crowning achievement of DeMille’s long and celebrated career. Regularly re-issued theatrically, then sold to television and released to home video and DVD, The Ten Commandments continues to make money on Blu-Ray and on streaming services, where it can be finally be seen, after many years, something like it looked wet from the printers in 1956 — in all its flawed glory.

[iii] As it would be in 1956, the parting-sea effect was achieved in 1923 by reversing footage of two waves of water crashing together in a tank, albeit on a much smaller scale than the later film. For the standing walls of sea, the 1923 team employed huge piles of clear jelly.

[iv] Admittedly, these composite shots are more jarring to modern audiences than they were in 1956, when process shots with back projection were de rigueur. Alfred Hitchcock, for one, frequently relied on such unconvincing effects.

JULIAN UPTON has written on US and British film for publications such as Filmfax, Bright Lights and the Journal of British Cinema and Television. He is the author/editor of the Headpress books Fallen Stars and Offbeat: British Cinema’s Curiosities, Obscurities and Forgotten Gems. He lives in Leicestershire, UK.
Posts by this Author
PrevPreviousScience — A Ghost Story for Our Time
NextAnsco Artworks: Lust for LifeNext

Teresa’s Records
Gangsters seek refuge and lose themselves in Cul-de-sac, a 1966 film by Roman Polanski. But what is on...
Read More
Offbeat Bingo
A list of films discussed in the recent Offbeat online panel event, handily crafted so you can mark them...
Read More
Figures in the Landscape: Rituals, Wilderness, and Canadian Cinema
Jennifer Wallis watches Rituals (1977) and explores Canadian wilderness on film in the tax shelter era.
Read More
Ansco Artworks: Lust for Life
Lust for Life, a 1956 biopic of artist Vincent Van Gogh, was shot on redundant film stock at director...
Read More
What is an Offbeat film?
Julian Upton talks about obscure British movies and their part in his book, Offbeat: British Cinema’s...
Read More
Offbeat Podcast
To coincide with the launch of the revised and updated Offbeat, a series of podcasts relating to the...
Read More
Dangerous Encounters: The Horror Film Fanzine as a Subversive Art
A single staple is the most primitive of zine bindings. Find out why Colton Cobb's Dangerous Encounters...
Read More
Last Night in Soho: In some ways surprising
Morgan Jones looks at Last Night in Soho to find a clumsy but unabashedly enjoyable psychedelic horror...
Read More
Carrying on in the country house: Andrew Sinclair’s Blue Blood
JENNIFER WALLIS on Andrew Sinclair’s 1973 film, Blue Blood, its real-life and fictional inspirations,...
Read More
“I ended up being in two of their films that night”
What is a custom movie? David Kerekes looks at Mail Order Murder: the Story of W.A.V.E. Productions and...
Read More