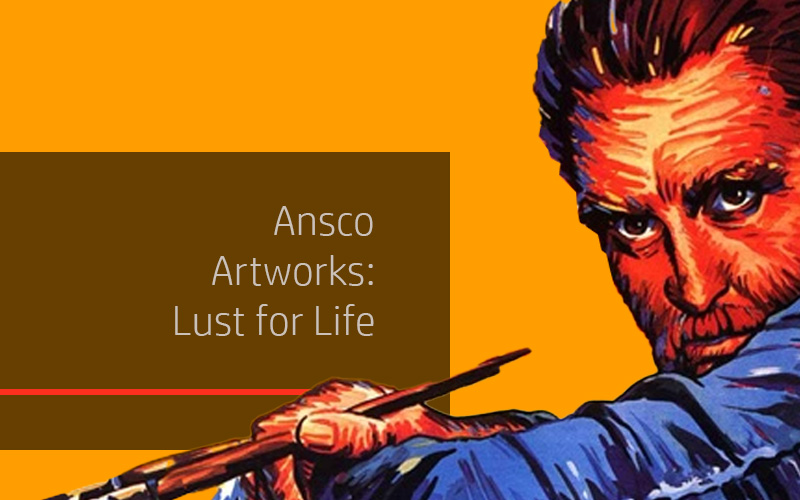 Lust for Life, a 1956 biopic of artist Vincent Van Gogh, was shot on redundant film stock at director Vincente Minnelli's insistence. Why?

Preparing Lust for Life (1956), his biopic of artist Vincent Van Gogh, director Vincente Minnelli argued with MGM against shooting in CinemaScope, which was all the rage in the mid-fifties. The ‘dimensions of the wider screen bear little relation to the conventional shape of paintings,’ Minnelli grumbled. He lost that argument. But he dug in his heels over the colour process. The director wanted to make Lust for Life in Ansco Color — and he ‘badgered, cajoled, wheedled and bullied’ MGM into capitulating.[i]

Ansco had been a name in the US photography business since the 1840s. In 1928, it merged with Germany’s long-established Agfa, which was then part of the IG Farben group of companies that would soon fall under Nazi influence. When America entered World War II in 1941, Agfa-Ansco’s US headquarters were seized by the Treasury Department as an ‘enemy asset’. The company was tasked with developing Ansco Color, which was based on Agfacolor, to supply the US Armed Forces with colour film stock. When the war ended, Ansco moved into the feature film business, joining a plethora of colour processes trying to erode Technicolor’s dominance over colour cinema; these included Polacolor, Americolor, Natural Color, Trucolor, and the eventual winner, Eastmancolor.

At this time, Ansco Color was a reversal stock, producing a positive rather than a negative image. It removed the need for negative-to-positive printing, but didn’t match the results of negative film.[ii] Nevertheless, early Ansco Color enriched cheap movies like The Man on the Eiffel Tower (1949). In 1950, Ansco introduced a negative-to-positive colour process. Unlike Technicolor’s famous three-strip process, this was a single-strip system that required no special cameras, printers or processing equipment. MGM, looking for a colour process it could own and control, embraced Ansco. In 1952, the studio released its first full feature in the Ansco process, The Wild North, a rousing outdoor adventure set in the Canadian mountains. Cinematographer Robert Surtees raved about Ansco’s rare quality of ‘reaching into the shadows to bring out detail — a quality possessed by no other colour film’,[iii] while photographer Margaret Markham said it had ‘a softer, more natural tone than we are used to seeing.’[iv] Over the next couple of years, MGM produced a slate of movies in Ansco Color (naming its lab process ‘Metrocolor’), including the musical Brigadoon (1954), which Minnelli directed. But in 1955, along with every other Hollywood studio, MGM succumbed to the rapid dominance of the Eastmancolor negative and quietly dropped Ansco. Ansco stopped production of its motion picture stock but stayed active in the still photography market.

Minnelli, however, thought that Eastmancolor/Technicolor[v] didn’t have the ‘subdued tones that would be needed in a film about Van Gogh’. The colour palette, he said, ‘was straight from the candy box… [a] ‘mixture of blues, reds and yellows that resembled neither life nor art’. At Minnelli’s insistence, MGM bought the last remaining 300,000 feet of Ansco Color motion-picture negative in existence, exclusively for use on Lust for Life.

Minnelli’s plan was to ‘recreate the subject matter of Van Gogh’s paintings not as frozen tableaux but within an everyday context.’[vi] As such, shooting on location was imperative to capture how Van Gogh’s moods and mindset were influenced by his environment during his wanderings around the Netherlands, Belgium and France. Minnelli decided to break the film into five sections, each requiring its own colour scheme to match the locales and, especially, the artist’s interpretation of them. The first two sections — covering Van Gogh’s time in Borinage, Belgium (where he worked in the mines) and his convalescence from illness at his family home in the Netherlands — evoke the bleak hues of his charcoal drawings and the dark greens of the overcast countryside. Moving to Paris, the scenes are ‘splashed in brilliant reds and blues’ as Van Gogh falls under the spell of the Impressionist painters. The fourth section, covering the artist’s most prolific if increasingly unstable period, is suffused with the vibrant yellows and golden browns of Arles and St. Remy in the south of France. The colour schemes of all four parts intermingle in the final section as Van Gogh succumbs to his self-destructive mania.

Minnelli engaged the great English cinematographer Freddie Young to shoot the location scenes in Europe. When filters and lights weren’t sufficient to recreate the look they wanted, more extreme measures were taken. A wheat field at the end of its cycle, for example, was ‘kept alive chemically’ until Minnelli could get there to shoot Kirk Douglas (as Van Gogh) painting Wheatfield with Crows. Young would be unavailable for the Hollywood shoot, so cinematographer Russell Harlan came on board. In the studio, Harlan was freer to manipulate the lighting and work with set designers to create ‘live action’ versions of paintings such as Starry Night Over the Rhône and Bedroom in Arles.

As well as recreating Van Gogh’s images in a ‘real-life’ context, Minnelli wanted to present the original artworks in the clearest detail possible. This necessitated a new method of insert photography. Still photographers were dispatched to museums and private collections around the world to capture 8”x10” Ektachrome transparencies of Van Gogh’s artworks under controlled lighting conditions. (One collector who offered access to his Van Goghs was actor Edward G. Robinson.) The transparencies were mounted onto frames back in the studio and lit from the rear to reveal every detail of the paintwork. A special camera set-up allowed the transparencies to be photographed wholly or in close-up, with the camera operator scanning up and down and dollying into them as required. Capturing details of the brush strokes and the daubs of paint squeezed directly onto the canvas, this method shows off Van Gogh’s artwork with both a documentary-style reverence and a creative zeal.

Not everyone celebrated Lust for Life’s use of colour. David Thomson has written that ‘one can’t help but long for Technicolor as the system that applied to Van Gogh best’. Lust for Life’s colours should ‘throb like wounds,’ he says; the Ansco Color is ‘just a touch too tasteful’.[vii] But the evidence from the version of the film restored in 2015 for Blu-ray and HD streaming seems to vindicate Minnelli’s choice. Technicolor might have been too cosmetic for the first two sections of the film, with their coal-dust skies and bottle-green foliage, and would likely have ‘Disney-fied’ the scenes at Arles and St. Remy.

Vincente Minnelli remained convinced of Ansco’s qualities. Many years after Lust for Life, he said that shooting in Ansco Color was ‘the most important victory’ of all the battles he fought to make the film.[viii]

[ii] Reversal stock would generally be associated with newsreels and amateur films.

[v] By 1956, the Technicolor Corporation was generally printing Eastmancolor negatives, instead of its own stock. Thus ‘Eastmancolor’ and ‘Technicolor’ had effectively come to mean the same thing.

JULIAN UPTON has written on US and British film for publications such as Filmfax, Bright Lights and the Journal of British Cinema and Television. He is the author/editor of the Headpress books Fallen Stars and Offbeat: British Cinema’s Curiosities, Obscurities and Forgotten Gems. He lives in Leicestershire, UK.
Posts by this Author
PrevPreviousCrikey Moses! A Quick Look at the Making of The Ten Commandments (1956)
NextFigures in the Landscape: Rituals, Wilderness, and Canadian CinemaNext

Teresa’s Records
Gangsters seek refuge and lose themselves in Cul-de-sac, a 1966 film by Roman Polanski. But what is on...
Read More
Offbeat Bingo
A list of films discussed in the recent Offbeat online panel event, handily crafted so you can mark them...
Read More
Figures in the Landscape: Rituals, Wilderness, and Canadian Cinema
Jennifer Wallis watches Rituals (1977) and explores Canadian wilderness on film in the tax shelter era.
Read More
Crikey Moses! A Quick Look at the Making of The Ten Commandments (1956)
One special effect would dominate the film — the parting of the Red Sea. Julian Upton crosses Cecil B....
Read More
What is an Offbeat film?
Julian Upton talks about obscure British movies and their part in his book, Offbeat: British Cinema’s...
Read More
Offbeat Podcast
To coincide with the launch of the revised and updated Offbeat, a series of podcasts relating to the...
Read More
Dangerous Encounters: The Horror Film Fanzine as a Subversive Art
A single staple is the most primitive of zine bindings. Find out why Colton Cobb's Dangerous Encounters...
Read More
Last Night in Soho: In some ways surprising
Morgan Jones looks at Last Night in Soho to find a clumsy but unabashedly enjoyable psychedelic horror...
Read More
Carrying on in the country house: Andrew Sinclair’s Blue Blood
JENNIFER WALLIS on Andrew Sinclair’s 1973 film, Blue Blood, its real-life and fictional inspirations,...
Read More
“I ended up being in two of their films that night”
What is a custom movie? David Kerekes looks at Mail Order Murder: the Story of W.A.V.E. Productions and...
Read More