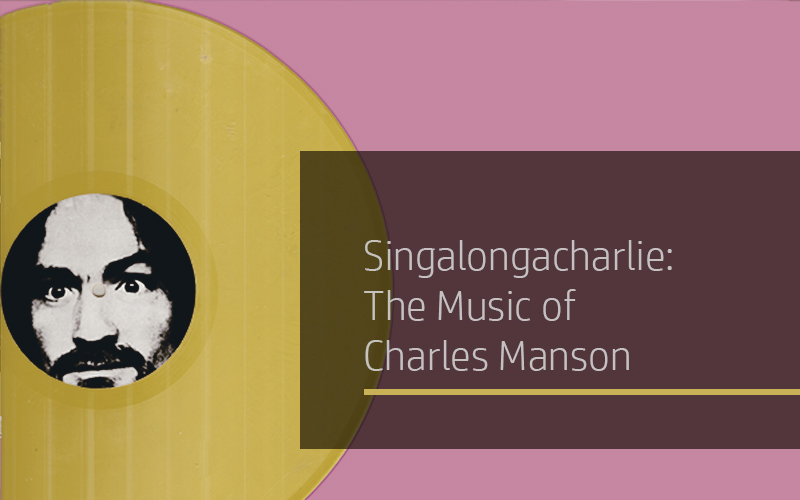 This much-maligned LP is often characterised as being a recording of Manson’s brainwashed dupes singing around the campfire in sympathy and association with the absence of Charles Manson’s body through the continuum of his spirit through musical means. “How can they sound so happy when they are vicious murderers?” seems to be the general line of enquiry. The answer to this is not that difficult. The people involved in this recording are expressing their own world, the haven of the desert and their ranches, the wide open spaces, the natural elements, the retreat to Death Valley and the AIR FIRE WATER TREES philosophy that would later define Manson’s post confinement actions. These songs epitomise ‘desert music’ a statement of friendship and faith in Manson and his beliefs. Again, the quality of the recordings does not assist easy engagement with the music on the record. As Jeff Nuttall once noted of the 1960s: “Young people are not correcting society. They are regurgitating it”. The Manson family would gather under the clear skies and stars to sing these songs. They continued to intone the songs at Manson’s defence, the beautiful harmonies seeming eerie in the context of a mass-murder trial. Steve Grogan appears the most prominent performer on these recordings but the Manson ‘girls’ provide a haunting (heavily drenched in reverb) chorus as backing (but not always ‘backing’ as they sing the main lines of the songs as well as ‘call and response’ vocals). The songs are noticeably darker than the earlier solo Manson recordings, lacking any sense of the humour present in those sessions. The opening driving track in a minor key Ra-Hide Away pleads that they “let him go”. The song is a western epic set to communal folk singing. The Fires Are Burning is a terrifying and atmospheric minor-key song mythologizing the intense heat of love. If you were looking for a song to epitomise the dark hypnotic power of the psyche of Manson’s Family then Die To Be One would be it. A plaintive violin played by Share wavers throughout the song. Die To Be One is a continuation of the Cease To Exist philosophy: come together, lose your ego, become nature, death is a new beginning. “Up the valley of death they come” begins No Wrong — Come Along as witchy chants lure the wanderer and lost soul into the realms of the Family. The calls heard are those of the coyote howls loved and revered by Manson. Get On Home is a roots song about the natural world of the drop-out farmscape. Is There No One In Your World But You? contains a haunting and evocative ghostly backing chorus. First They Made Me Sleep In The Closet uses a cheery and comic setting for a dire tale of childhood neglect (a favourite Manson theme). The record also includes the unofficial Family anthem I’ll Never Say Never To Always here performed with a guitar backing. The maniacal laughing that opens If I Had A Million Dollars — extended beyond the duration that would be comfortable — still has the power to disturb.

The music on this record is a pale imitation of the effectiveness of the communal ‘family’ process of singing (compare to the quality of Lyman Family recordings for example). This is also the result of a poor recording process. Yet these recordings still demonstrate the effectiveness of Manson’s song writing skills, and show that he was easily as gifted as many more famous and legitimate singers and songwriters.

Everything in life is good. It all flows. It’s all good. It’s all music…Bobby Beausoleil

Charles Manson’s music is designed to connect and communicate with the outside world. If his records had been released officially (instead of endlessly bootlegged) it is estimated that they would qualify for a gold disc (sales over 500,000 copies). Manson’s music is a form of outsider art — the work of an autodidact musician with a totally unique presentation style and perspective. It is foolish to expect and believe that Manson’s music is a form of ‘devil rock’. The cover versions and tributes in this field and the tributes to his underground aesthetic have nothing at all do with his own musical expressions (they are more about reflecting and interpreting the myth of Manson built up over the last forty years). One of the reasons that Manson’s myth endures is that show business has found irresistible the lure of a charismatic and messianic musician who is capable of actual murder. Unlike the rockers who for years have played at being evil and dangerous (with dire consequences) Manson is a figure that carried those fantasies into reality. Like the early blues singers that sang of the despair in the world and then were tragically killed, Manson rears up as an image of the true face of human tragedy. Manson is described as a “natural product of what you get when you cross a groovy subculture with a brutalizing system” and music has a powerful role to play in this. The Manson crimes disappear but are internalized in the mental sphere leaving what Baudrillard calls an occult trace. Music plays an essential role in this process.

There may be other Manson recordings. Vincent Bugliosi told me that Dennis Wilson had made some recordings of Manson at Santa Monica but that he had destroyed the tapes: “The vibes were not of this world” Wilson alleged. Manson’s music, like most of what he did, is hated and feared. But this makes me think of the words of Thom Gunn:

Perhaps Manson was not the only musician to kill the 1960s?

On February 14, 2017, Crites’ Coloring Book by Tom Crites became the first coloring book in the history of coloring … More

David Kerekes reflects on images from a modern-day Grand Guignol performance. I stumbled across this image on one of my … More