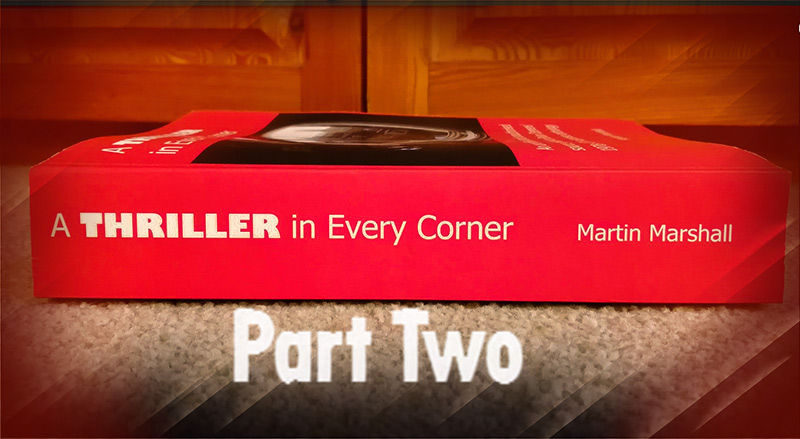 Part 2 of our interview with A THRILLER in Every Corner author Martin Marshall. The darker side of the Brian Clemens’ anthology series, and novel tie-ins.
⇒ Click here for Part 1 of this interview

JENNIFER WALLIS [JW]: What is it about Thriller that you think gives it its peculiar character? There’s something about it that’s both escapist (especially with some of the more ‘out-there’ episodes like One Deadly Owner, in which a model buys a haunted car) but also very familiar…

MARTIN MARSHALL [MM]: In prosaic terms, both the extended (and unusual) 65-minute running time and the frequent presence of an American guest actor alongside the British cast marked out Thriller as a show distinct from its contemporaries. Content and production techniques also played their part in generating the anthology’s character. Although the settings, even for the most outrageous of stories, were to be found in an ostensibly ‘real’ (if nearly always affluent) world, they played out as if that world was slightly off-kilter, not quite right. An online blogger put it well when describing the general milieu of the series as ‘a “gin-and-jag” world, pretty corrupt [where] seemingly anyone is prepared to kill’. In contrast with something like the universes of Tolkien, vampires, or futuristic deep space, Thriller set fears and phobias against a recognisable contemporary background. This allowed for the stimulation of emotional turmoil and anguish, and made long-lasting impressions in the minds of the audience!

Much of this (to me) appealing offbeat reality appears to result from [Brian] Clemens’ focus on ‘cause and effect’ ideas that he would then ‘fill in’ without being hampered by things such as plausibility. His Thriller narratives (he conceived every storyline, even those episodes scripted by others) were instigated by ‘concept’, developed through ‘construction’, and only then filled in with characters, allowing the actors to bring them to life. This contrasts with much of television drama – realistic or fantastic – that routinely begins with the characters (and their background) and builds outwards. This is not to say that more three-dimensional characterisation or motivation was absent from Thriller. File It Under Fear, for example, spotlights social awkwardness, ageing loneliness, and secretive introversion. In the Steps of a Dead Man highlights both the bonds of intra-familial love and the dangers this might bring when an outsider with malevolent intentions invades the family circle.

On a personal note, I often wonder if the appeal of Thriller to me is partially due to my background. Not dissimilar to two of my favourite genre film directors – Brian De Palma and David Cronenberg – I have a background in science, but am also fascinated with the arts and tend to be more appreciative of the suspense and horror genres rather than more mundane action/adventure or drama of a more highbrow/literary nature. Done well, genre programming like Thriller requires its own set of intrinsic skills and talent! Although a critical ‘style over content’ commentary continues to linger over the series in some quarters, what was striven for and (I think) usually achieved in Clemens’ anthology was style as content.

Jeremy Brett and Donna Mills, about to experience a vehicular haunting in One Deadly Owner. 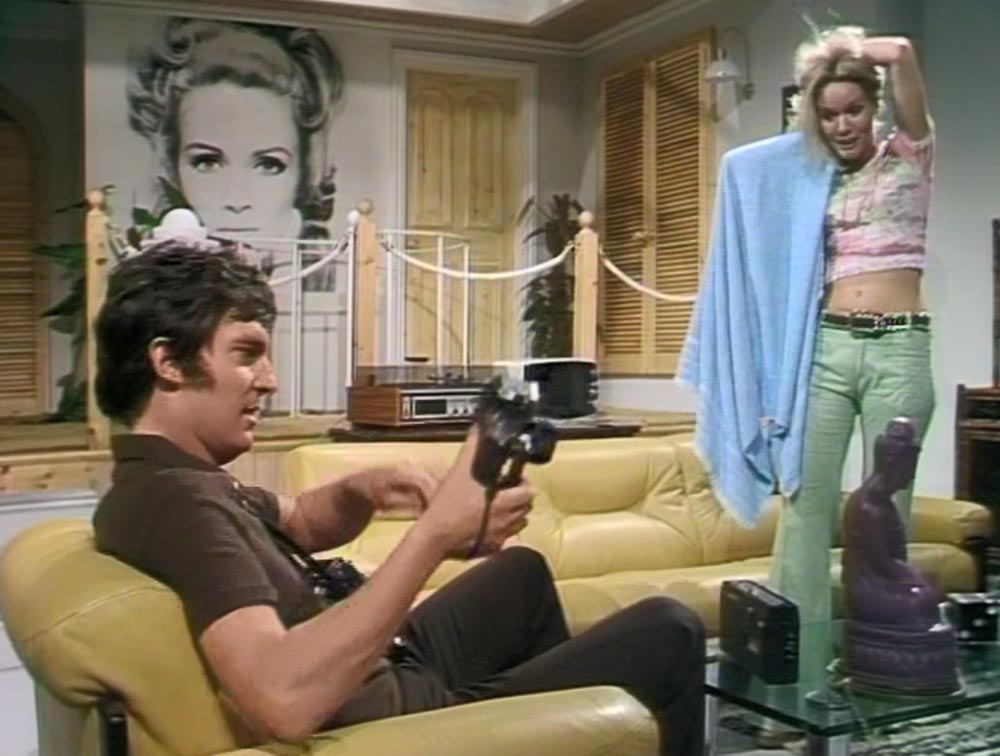 JW: I realise upon reading the book that some of my personal favourite episodes are among the most contentious or debated, especially One Deadly Owner and Spell of Evil! Were the few supernatural-themed episodes in the series received differently by viewers at the time?

MM: Some of the supernatural narratives like One Deadly Owner and Someone at the Top of the Stairs have proved the best remembered and regarded over the years. The 10 episodes that made up the first British run featured a high proportion of these ‘fantastical’ subjects. Thereafter, they became fewer and, more often than not, were tangential themes within the story – or proved to be a red herring (as in Sleepwalker). Due to their popularity (both then and now), it seems unlikely that the reduction in the number of such storylines as the series progressed was a result of apathetic or hostile audience response in either Britain or the US.

When I questioned Clemens about this decreasing emphasis on ‘outright fantasy’, he said “it wasn’t conscious, just the way the stories took us”. There are two points to add here, though. Firstly, Clemens had a self-confessed fascination with British mass murderers – and their techniques! Mary Pearcey, Hawley Harvey Crippen, and George Joseph Smith’s infamous ‘Brides in the Bath’ killings were all spotlighted by him when he told me: “I’m a great fan of British murders! In America, they don’t have murders, they have slayings! I’ve always said if there was an Olympic event for murders, we’d get the gold every time!” Such an ‘appreciation’ inspired several serial killer-type themes, whether of the conniving, obsessive, or mentally disturbed variety. Secondly, Clemens had a penchant for convoluted storytelling. His narratives often twisted and turned unexpectedly – take for example The Double Kill episode – or took a sudden shift in a direction that upended audience expectations (as in The Colour of Blood).

Such predilections conceivably worked against the supernatural storylines, which in the broadest sense comprised ‘monster pictures’. These lacked the facility for intricate twists and relied more on ‘pure mood’ or a linear, even predictable, fantastical threat for their effect. I believe Clemens found more scope in the suspense/mystery/whodunnit variants in devising his narratives, hence their prevalence.

Spooky goings-on in Spell of Evil with Diane Cilento as the bewitching Clara. 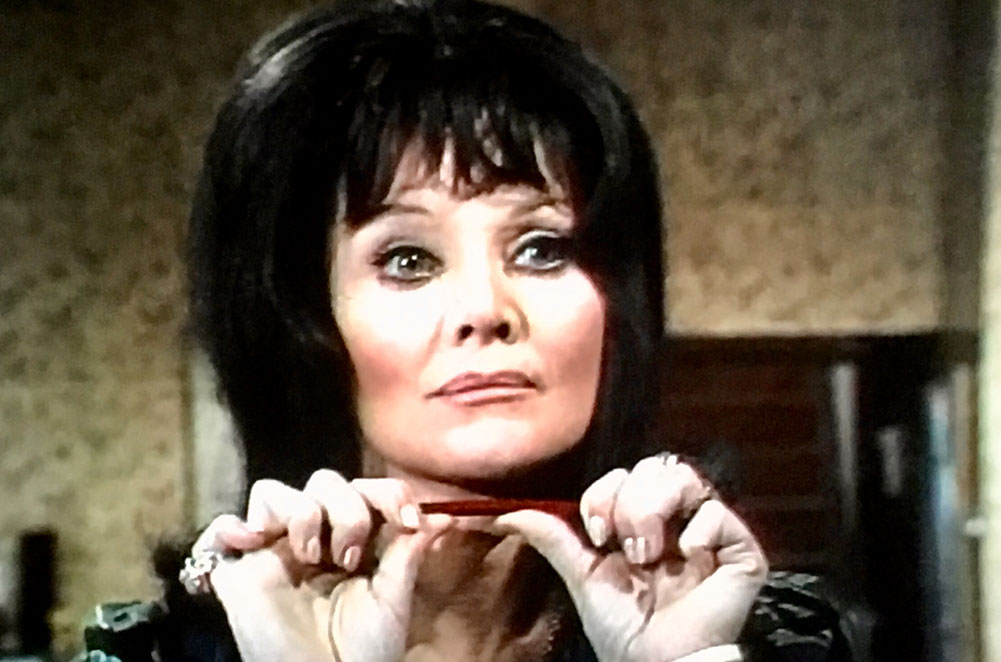 JW: One thing that I was not aware of until reading the book was that there were some Thriller paperback adaptations. Could you tell us a little about these and how they differed from the episodes?

MM: Common to many other series, TV tie-in books were popular in an age before domestic home video was affordable or available to the mass market. There were two paperbacks released. These were Thriller (1974) and More Tales from Thriller (1975), both published by Fontana Books. Each featured adaptions of five episodes by author Ted Hart. Although Clemens’ name was conspicuous on the covers, he had no direct involvement in the conversion of his screenplays into book form.

The adaptations proved fairly true to the onscreen versions, if occasionally edited of detail. In the story ‘In My Lady’s Chamber’ (original working title for Ring Once for Death), the history of Ledworth as a ‘fallen’ character (a memorable scene onscreen, played out by Michael Jayston and Thorley Walters) was completely excised, leaving only the briefest mention of him in the text. Sometimes, a little additional background detail was filled in, like the judge’s character and history in the written version of ‘The Colour of Blood’. Locations were occasionally given fictional names absent from onscreen versions. The town in the book version of ‘File It Under Fear’ was named as Barbury-on-Sea, whilst ‘Lady Killer’ boasted ‘the dump of ‘The Redcliffe Arms’ Hotel in Wechester’.

Coming across as fairly flat in comparison with the atmosphere of foreboding in the televised versions, the most contentious aspect of both books proved to be a rather unremittingly lurid and salacious tone. In ‘Murder in Mind’, for instance, Betty Drew’s appearance was transformed dramatically! ‘The one thing noted, with any certainty, by Tom Patterson was that the lady wasn’t wearing a bra … the body of a temptress but not the heart.’ And the first page of ‘File It Under Fear’ bore the following descriptive prose: ‘Even the raincoat couldn’t begin to hide the lush, young lines of her body.’ These weren’t isolated instances. Had they appeared on television in such a way, they would have given the notoriously socially conservative US TV networks apoplexy!

JW: Thanks so much for taking the time to talk to us, Martin! Finally, are there plans on the horizon for another book?

MM: I do hope so! I gathered so much comment from the interviews for A THRILLER in Every Corner regarding material that either didn’t make the ‘final cut’ or referred to other programmes or careers: anecdotes that I’m tempted to compile in a ‘Tales from the Telly’ volume highlighting that fascinating era of British television. I also have a range of ideas for ‘quirky’ or ‘fantastical’ fiction just itching for development into short stories or potentially longer formats. I am literally (ahem) primed to respond to interest from publishers out there!

A THRILLER in Every Corner is available to buy here. Current discount codes are highlighted alongside a wealth of additional material on the Brian Clemens’ THRILLER Facebook page  You can also follow Martin on Twitter, @MartinMAuthor1.

PrevPreviousA Thriller in Every Corner
Next‘This happy place’: The uncanny appeal of The SentinelNext