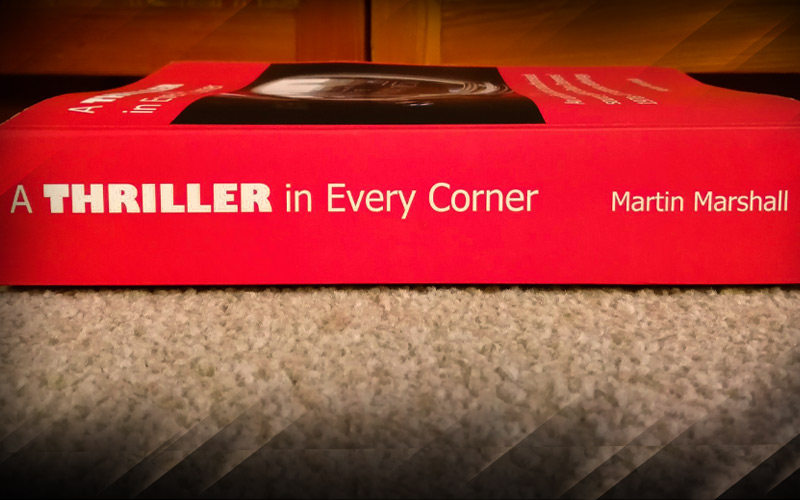 MARTIN MARSHALL’s recent book, A THRILLER in Every Corner, is a meticulously researched valentine to the Brian Clemens’ series that captivated TV audiences in the 70s. In the first of two posts, fellow Thriller fan JENNIFER WALLIS speaks to Martin about the book and what it is that gives the series its enduring appeal.

JENNIFER WALLIS [JW]: I was quite late to Thriller, encountering it via the Network DVD collection. When did you first discover the series?

MARTIN MARSHALL [MM]: Perhaps atypically, given many of the series’ enthusiasts first spying the ‘forbidden fruit’ of Thriller as children when they were allowed to stay up and watch on Saturday nights during the mid 1970s, I first stumbled on the show in sixth form via the ITV regional repeats of the early 1980s, albeit in their bastardised ‘movie’ version edits. I was lucky that the first episode I happened upon was the darkly-themed classic instalment, In the Steps of a Dead Man: brilliantly structured, cast, shot, and performed, and possessing a ‘killer’ conclusion which combined elements of shock, horror, the potential for poetic justice, and a moral dilemma posed for a cast member and viewers alike.

JW: A THRILLER in Every Corner is a real labour of love, thoroughly researched. When did you conceive the idea for the book and how long did it take to complete?

MM: Well, thank you. It was a joy to work on. Looking back, it seems strange that although I had been resident in Bedfordshire for some 15 years – with the creator of Thriller living less than 10 miles away – that the idea for what would transpire as A THRILLER in Every Corner was then never a consideration. I suppose those long days commuting into London and full-time work took precedence. It was only once I had relocated back to my home town on the Yorkshire coast – 200 miles from ‘the action’ – with time rapidly marching on, that I seriously considered following up on that suspense anthology that had laid in the recesses of my subconscious since I’d chanced upon it in the 1980s.

In 2011 I made some tentative enquiries in the hope of speaking to the cast and crew. One of the first to respond was the late Brian Clemens himself. I nearly fell off my chair when he phoned me out of the blue one Saturday morning and we arranged to talk. Events soon snowballed. That same year, I spoke extensively to him as well as to a couple of directors. One was Malcolm Taylor who proved very candid. He sadly passed on a mere six months after our discussion. Despite all three conversations producing ‘gold’, followed by other interviews and the start of research into archival paperwork and contemporary reviews, the idea of a book (let alone the opportunity to sit down and compile it) only crystallised once I’d left full-time employment. That was in early 2017 and the hard work (although, given the subject, it never felt like it) really began. So, to (finally) answer your question: 10 years or three and a half, depending on how you look at it! 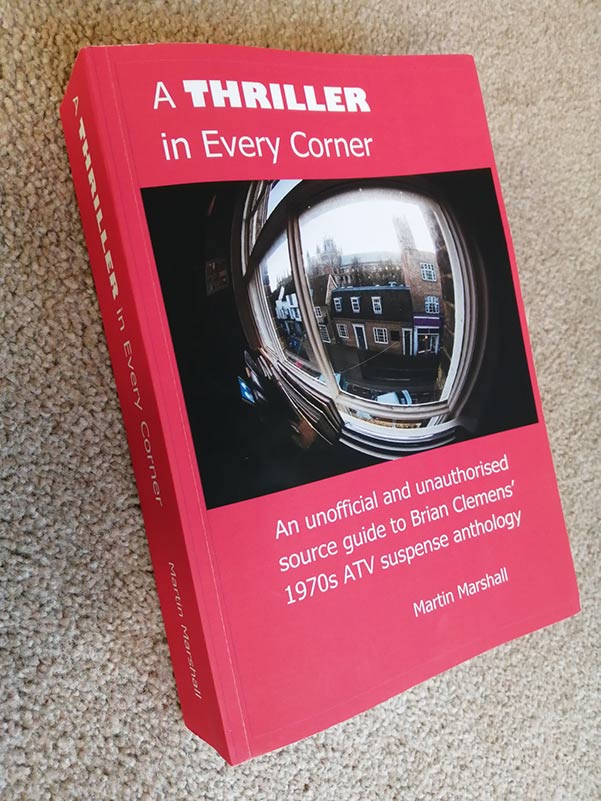 JW: Something that struck me when reading the book was how wide a reach Thriller had, with episodes screened in North America, Australia, and several European countries. Was this usual for a TV series of this kind, or was Thriller a bit of an anomaly?

MM: I believe it was John Carpenter who said “we may laugh at different things but we’re all frightened of the same situations”. In virtually everything that Clemens wrote for the big or small screen, he was mindful of ‘universality’, always seeking to appeal beyond British parochial interests – and not just to the United States (in commercial terms, by far the most important for TV sales). This was clear in The Avengers throughout the 1960s, and he carried this attitude into Thriller, which I’d argue was one of his most personal projects.

Predominantly videotaped, much UK TV drama of the period tended to be seen in relatively few countries, those with Commonwealth ties like Australia, Cyprus, or African nations, and also via the (mainly) state broadcasters of Western Europe. Being sold to and seen just about everywhere across the globe, Thriller was most certainly an exception to the rule! The ‘holy grail’ of a sale to one of the three main commercial US networks remains a particularly hard nut to crack for British-made programmes. Considering its non-primetime slot, Thriller’s success with American audiences on ABC-owned and affiliated stations was both anomalous and worthy of note. By the 1980s some 90 global territories had broadcast the anthology. Most series would have been happy to achieve a fraction of that international success.

JW: When I first encountered Thriller a big part of its charm was never quite knowing whether the story you were about to be presented with was going to be a crime thriller, something supernatural, or more in the vein of a ‘soft’ slasher. How much information – in terms of episode synopsis in TV listings, for example – were audiences generally given about each episode? Was a degree of surprise about each episode’s approach part of the attraction?

MM: I’ve always divided the episodes into four broad categories: Hitchcock-style suspense; baffling mystery; detective/whodunnit tales; and supernatural horror, although there are many overlaps and sub-themes (including comedy and outlandish espionage – the latter two surely a nod to The Avengers). In Britain, synopses tended to tease, with merely a hint of the setup or background to the individual story. For example, ‘When a man makes his living out of rich, gullible women, there comes a time for the tables to be turned’ was how one episode was described in the TV Times. Whether the content proved plausibly naturalistic or outrageously fantastic, had a linear structure or was full of surprise twists and narrative shifts, a consistent ‘aura of unease’ was arguably the series’ greatest defining feature. This variety proved popular with viewers, keeping them on their toes.

Maureen Lipman as the librarian in File It Under Fear. 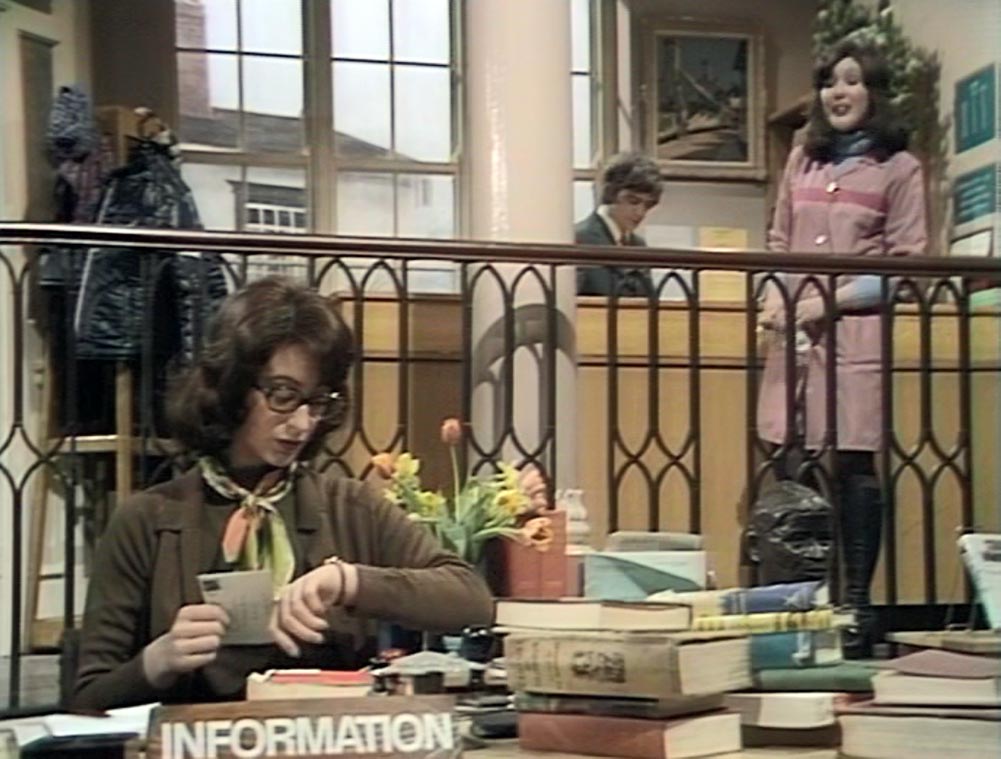 JW: One of my favourite episodes is File It Under Fear, partly because of its amazing library set. Many episodes had eye-catching, slightly claustrophobic, interior sets (although I also hugely enjoy I’m The Girl He Wants To Kill for its cavernous office block). Can you tell us a little about set design in Thriller?

MM: Indeed. Clemens himself preferred a thriller to be as internalised as possible, ideally with only brief location-establishing exteriors. Although much of his output (and background) was in filmed drama, he was more than happy with the stage-like settings created by ATV’s design team for recording in a studio environment. Here, the elements of claustrophobia – looking in on the characters as they play out their roles (often in near ‘real-time’) – were heightened. Design work was one of the first considerations once a script had been delivered to the production office and the relationship between the designer and director of individual shows was a key element. If not available ‘in-store’, sets would have to be built from scratch to fit the confines of the (relatively cavernous) ATV Elstree Studio C. They were then carefully dressed to requirements, using props and fittings available from storage or bought in specially.

The generous budget allocated to Thriller (a result of upfront payments from the commissioning US network) allowed experimentation in this area, most notably in the construction of four-wall settings. This allowed any of the walls to be removed to allow for particular camera angles (the normal procedure was to use three-wall sets with the cameras always facing the action from the missing fourth wall). Verisimilitude was regularly achieved. The magnificent multilevel library set you highlighted is an excellent example, and was based on the internal layout of Clemens’ local public library as he described to me: “Why wrack your brains … all you’ve got to do is pop into the library, take a couple of photographs … then come back and design it like that … Hitchcock used to do that.” Speaking to me about the hotel suite in An Echo of Theresa, director Peter Jefferies explained: “The studio interior set used in ‘Echo’ was an almost identical replica to the suite at the Savoy Hotel [where American guest stars Paul Burke and Polly Bergen were staying]. I think we probably changed a few angles here and there to make the shooting more interesting … but that’s what a suite at the Savoy looked like.”

Echoes of the Savoy in An Echo of Theresa. 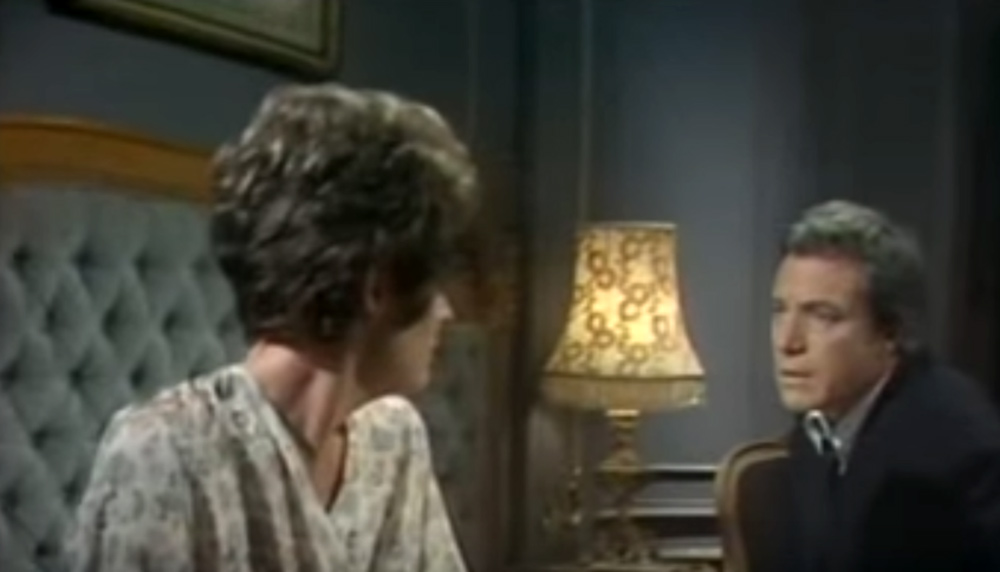 Depending on their size, up to six different settings could be accommodated in the studio. These could be interconnecting rooms of a large property, like the blind school in The Eyes Have It or several internal settings if the story demanded it, as in Good Salary – Prospects – Free Coffin. Despite the copious capacity of Studio C (where every episode of Thriller was taped), sometimes there was still not enough room for all the internal sets. If this was the case, as in Death to Sister Mary, structures would be erected for the first studio day, then taken down and replaced overnight.

JW: The book isn’t simply an episode guide to the series, but touches upon broader events, developments, and practices in British television and film at the time, from strikes to videotape editing. How typical was Thriller in terms of things like its production schedule, filming techniques, etc.?

MM: Very atypical in many ways for a studio-based production! According to Robert Cardona, an American-born director who helmed three Thriller instalments, “the Thriller series was an attempt at combining television and film styles of production – trying to take the best of both worlds.” Apart from the four-wall sets, techniques like floor lighting to achieve expressionistic shadow effects; the use of cranes and hand-held camera work; the facility to rehearse-record throughout studio days; intricate blocking to allow fluid ‘on-the-move’ sequences around the voluminous and sometimes multilevel sets; and extensive dialogue-free sequences where the visuals carried the story (there are some masterful sections in I’m The Girl He Wants To Kill), all mark out the show as experimental to the norm.

Four-day studio schedules were double the normal allocation for videotaped dramas. And on location, 35mm film stock and equipment (necessitating a large crew, sometimes to the chagrin of directors on a tight schedule) were employed in lieu of the usual 16mm gauge typically used for exterior film inserts, with the series also boasting many extensive night shoots.

Thanks, Martin! In our next instalment, we geek out over Thriller’s offbeat character, supernatural shenanigans, and lurid paperback tie-ins.

⇒ Click here to read Part 2 of this interview

!A THRILLER in Every Corner is available to buy here. Follow Martin on Twitter (@MartinMAuthor1) to be notified of regular discount codes! 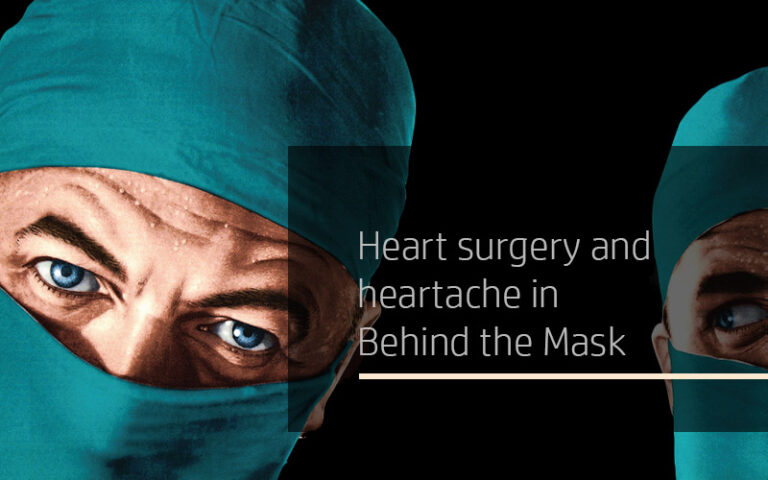 PrevPreviousTaking Tobe Hooper’s Comment That Watergate Inspired ‘Chain Saw’ and Running With It
NextA Thriller in Every Corner, Part 2Next