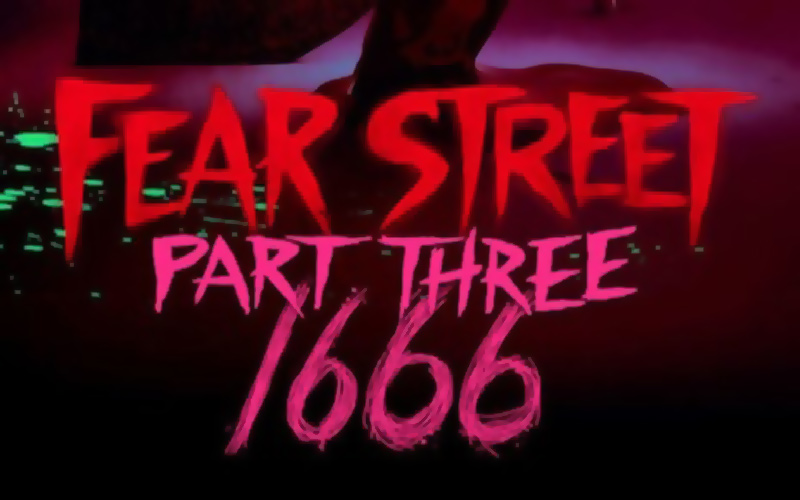 Fear Street: Part Two — 1666 premiered on Netflix on July 16 2021. This was probably my favourite instalment of the trilogy, with its references to the Salem witch trials and subtle nods to Robert Eggers’ The Witch (2015). This was much more rooted in the folk horror than slasher genre, which made this more enchanting for me.

The story sees Deena reliving the last days of Sarah Fier in 1666 (although we do catch glimpses of the ‘real’ Sarah [Elizabeth Scopel]). Fier lives with her father George and brother Henry in Union (the original settlement before the town was divided into Shadyside and Sunnyvale). We get an interesting glimpse of teenage life of the 17th century: the teenagers of the town get ‘high’ on berries and applejack at night in the woods (although it may not be historically accurate, it was a great touch). Hannah Miller (Olivia Scott Welch) and Sarah Fier have a secret lust for one another, echoing Deena and Sam’s relationship in 1994 (and portrayed by the same two actors). As the two are kissing in the woods, someone sees them, causing tension with Hannah’s mother who warns her to stay away from Deena who she believes is a corrupting influence.

Strange occurrences begin to happen in the town the next day: livestock die, food rots, the water supply is poisoned, and Hannah warns Sarah that she believes her father — Pastor Cyrus Miller (Michael Chandler) — to be possessed. Sarah and Hannah start to believe it is their relationship that is sinful, and this is God’s way of punishing them. This speaks a lot to representations of sexuality and how women who do not fit the traditional mould of society become “responsible” for everything that goes wrong.

The villagers collapse into collective hysteria after Cyrus Miller kills 12 of the town’s children (including Sarah’s brother Henry). This was probably my favourite part of the film as it clearly drew upon the Salem witch trials of the 17th century. The villagers were looking for someone to punish and claimed that Pastor Miller “had to be possessed to commit the crime that he did”, as no one of the Pastor’s standing could commit such a brutal murder (can a man not turn evil of his own free will?).

Caleb (Jeremy Ford) accuses Hannah and Sarah of being witches — before a flashback to the night before where he is seen trying to sexually assault Hannah, before she shuns his affections with the help of Sarah. Caleb says he saw her laying with the devil, and that the other townspeople agreed. The viewers know this information is false, but that is precisely what made the witch hunts so terrifying — once someone was accused, they were guilty by default. Sarah and Hannah were condemned as they did not fit societal norms; they were outcasts because they were homosexual. They did not want to consort with men, and they were outspoken: this made them not only dangerous in the eyes of the townspeople, but easy to condemn. As Hannah says, “They think we are guilty, so we are.”

Sarah says something that really struck a chord with me: “I do not fear the devil, I fear the neighbour who would accuse me, I would fear the mother who would let her daughter hang.” The devil, or the possessed person, in Fear Street 1666 is not what makes it terrifying, it is the compliance of people who are so willing to see others hang. Sarah and Hannah’s relationship was not what cursed the town. Rather, it was the work of Solomon Goode (Sheriff Nick’s ancestor) who struck a deal with the devil in exchange for prosperity, power, and Sunnydale’s success, while Shadyside rotted. In return he would have to sacrifice one life every year; Cyrus Miller was the first to be sacrificed.

That is what makes this last instalment so powerful — we find out it was never Sarah Fier’s fault. Throughout, we were presented with the “the witch is evil and responsible for everything bad” narrative, when in actuality Sarah Fier was an innocent girl who wanted people to see the truth. She was no witch, but a scapegoat. The murders that were happening were all down to Sheriff Nick Goode and his ancestors. Before Sarah was captured by Solomon, it was liberating and emotional to watch her fight for her life, as she was a very strong female character. In the end, she confesses to being a witch and bewitching Hannah to save her life. Again, thinking back to the witch trials, how many women confessed to something they did not do to escape torture, or perhaps save a loved one? They needed a witch to blame, so she became one. Sarah is executed and dies.

Flashing back to Fear Street 1994, once Deena knows the truth about Sarah Fier, she tells her brother, in what is perhaps the trilogy’s most iconic line, “Goode is evil.” This is a deliberate link back to Nicholas Hytner’s The Crucible (1996) as many of the married female characters, titled “Goody”, are persecuted as witches. In Fear Street, it was the Sheriff that everyone put their trust and faith in who was the antagonist all along. Goode reoccurred throughout the series, but I thought it was because he was an irresponsible adult who was going to be proven wrong, not that he was the devil in disguise. An interesting choice of profession that he should be a Sheriff, too, perhaps speaking to corrupt law enforcement officials in the United States?

Back in 1994, Deena, Ziggy, Josh, and Martin (Darrell Britt-Gibson), set up an elaborate plan to kill Sheriff Goode in Shadyside mall and, with the help of Sarah Fier’s spirit, he is killed. All Goode things must come to an end.

Overall, the Fear Street trilogy was executed very well. There were some important underlying themes exploring representations of gender, sexuality, and class differences in horror, and it paid homage to traditional slasher tropes, as well as folk horror. The trilogy did R.L. Stine’s books justice. The biggest takeaway was not fearing the devil, but the man who summons him. I think it only fair to return to the poem that condemned Sarah Fier and rewrite it in homage.

Lakkaya Palmer is a recent MA Gender and Sexuality Studies graduate. Her research interests are in social history, gender theory, American horror cinema, and popular culture.
Posts by this Author
PrevPreviousFear Street: Part Two – 1978
Next“I ended up being in two of their films that night”Next

Figures in the Landscape: Rituals, Wilderness, and Canadian Cinema
Jennifer Wallis watches Rituals (1977) and explores Canadian wilderness on film in the tax shelter era.
Read More
Ansco Artworks: Lust for Life
Lust for Life, a 1956 biopic of artist Vincent Van Gogh, was shot on redundant film stock at director...
Read More
Crikey Moses! A Quick Look at the Making of The Ten Commandments (1956)
One special effect would dominate the film — the parting of the Red Sea. Julian Upton crosses Cecil B....
Read More
Offbeat Podcast
To coincide with the launch of the revised and updated Offbeat, a series of podcasts relating to the...
Read More
JOHN CALE IN THE ’70s
In the mid-70s, John Cale released three albums on Island Records. It's an exceptional period for the...
Read More
Last Night in Soho: In some ways surprising
Morgan Jones looks at Last Night in Soho to find a clumsy but unabashedly enjoyable psychedelic horror...
Read More
‘I press the shutter and it’s my way of saying WTF’
"A sense of permanence, like an old idea of a dystopian future," is how David Kerekes describes the photographs...
Read More
Carrying on in the country house: Andrew Sinclair’s Blue Blood
JENNIFER WALLIS on Andrew Sinclair’s 1973 film, Blue Blood, its real-life and fictional inspirations,...
Read More
“I ended up being in two of their films that night”
What is a custom movie? David Kerekes looks at Mail Order Murder: the Story of W.A.V.E. Productions and...
Read More
Fear Street: Part Two – 1978
In her second blog on Netflix’s Fear Street trilogy, Lakkaya Palmer reviews the 1978 instalment, where...
Read More