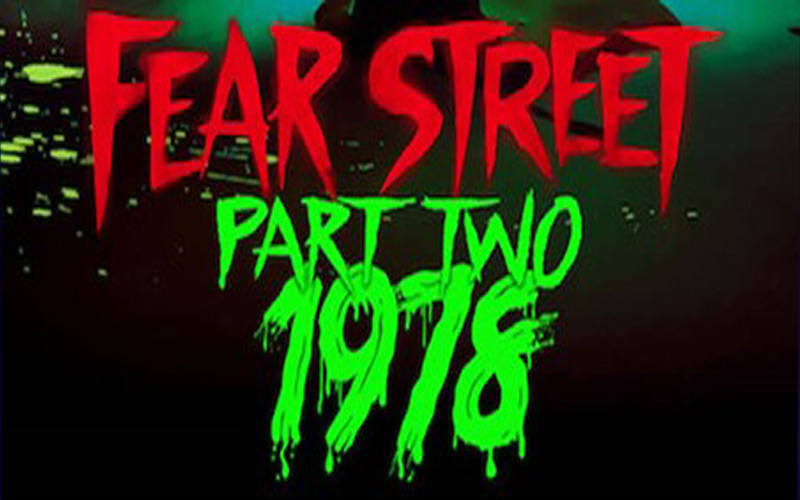 Fear Street: Part Two – 1978 premiered on Netflix on 9 July 2021, the second instalment in the Fear Street trilogy (see my review of Part One here). The opening of Part Two sees Deena and Josh restrain a possessed Sam before travelling to the house of Camp Nightwing survivor, C. Berman. Berman relates how she lost her sister to the witch’s curse. She warns Deena and Josh that “the past is never really the past”, and we go back in time to watch how the nightmare unfolded for her in 1978. 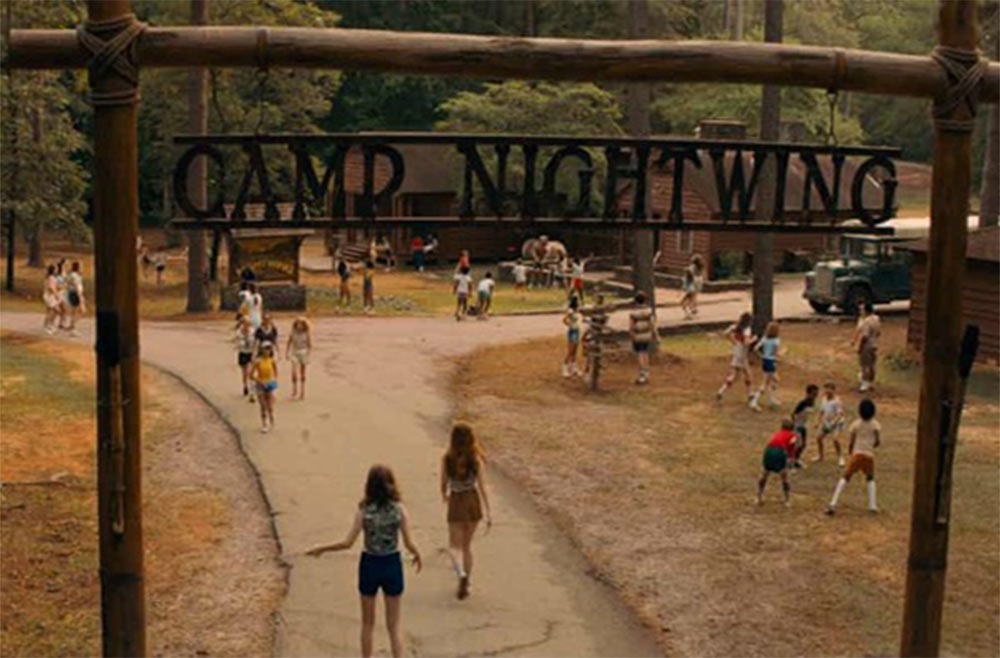 In July 1978, Ziggy Berman (Sadie Sink) and her older sister Cindy (Emily Rudd) are at Camp Nightwing for the summer, Ziggy as a camper and Cindy as a counsellor. Ziggy is constantly taunted by a girl named Sheila, from Sunnyvale (on the Sunnyvale/Shadyside rivalry, see Part One). Sheila and her friends attempt to hang Ziggy from a tree.

Two camp counsellors – a young Nick Goode (Ted Sutherland) (the Sheriff in the 1994 instalment) and Kurt (Michael Provost) – intervene to stop the bullying. The scene is reminiscent of that in De Palma’s Carrie (1978) where Carrie is mocked in the shower room by a group of girls and ultimately saved by her gym teacher.

The Berman sisters are opposites. Cindy seems to desperately crave the acceptance of the Sunnyvalers, whereas Ziggy loathes them (and rightfully so). Whilst audiences can sympathise with Cindy’s motivations, she seems clueless as to how snobbish and horrible the people of Sunnyvale are, almost disregarding the bullying of her sister.

Cindy prioritises making enough money to leave Shadyside and going to college and is unapologetic about this. This echoes 1994, in which Katie and Josh were only selling drugs to make enough money to have a better life outside Shadyside. Any curse seems to be a curse of low socio-economic background, with the teenagers victims of their circumstances. In some ways, the witch’s curse is symbolic of this: something that can follow you and that seems inescapable.

After the hanging incident, Ziggy goes to the nurse’s office for Nurse Lane to attend to a burn wound. Nurse Lane is not acting like her usual self, as she starts talking about her deceased daughter, Ruby. Later that day, Cindy and her boyfriend Tommy are attacked by Nurse Lane, who claims that Tommy will “die that night”. She is removed by the police, and rumours start to circulate that she was possessed by witch Sarah Fier, as was her daughter Ruby, who had slain seven friends before killing herself. We met Ruby in the 1994 instalment, when she attempted to kill Simon, and this was a great “Ooohhh!” moment. As the trilogy goes backwards in time, everything begins to make more sense.

Cindy and Tommy investigate after Nurse Lane’s attack; alongside frenemy Alice and her pothead boyfriend Arnie, they find Nurse Lane’s diary and a map to Fier’s house. Lane claims in her diary that Fier struck a deal with the devil.

When the group arrive at the house, they find it is isolated but discover “the witch’s mark” below the house, with the names of all previous Shadyside killers carved into the stone. Tommy’s name is also on it. He becomes possessed, killing Arnie in front of Cindy and Alice. Tommy then goes on a killing spree: killing other camp counsellors, Alice, a group of children, then Ziggy and Cindy. However, camp counsellor Nick Goode-y two shoes brings Ziggy back to life by performing CPR, true to his word that “a lot of people will die tonight, but not you [Ziggy]”.

We learn that Cindy was not the sister that survived, but that C. Berman is Ziggy. In the flashback, once Ziggy tells Nick about Sarah Fier possessing people, he shuns her. This was probably the most heart-wrenching scene, having someone Ziggy developed a close friendship with dismiss her beliefs, at the same time as losing her sister. The Shadyside curse becomes a self-fulfilling prophecy.

Fear Street: Part Two was probably my least favourite of the trilogy. It felt very slow compared to 1994, the deaths very samey, and I didn’t connect to the story as much. There were some extremely cringey clichés too: the irritating exaggeration of the mean girls trope with Sheila vs Ziggy; the stereotypical camp counsellors who smoke weed and have sex in the outhouse; and the hysteria of Nurse Lane that played into some old patriarchal stereotypes. Part Two was by no means terrible though and had some incredible moments; for one thing, the 1970s setting was fantastic and made me nostalgic for a time I never lived in. The deaths in 1978 seem more brutal than the murders of Katie and Simon in the first instalment, perhaps, because there are groups of children who are slaughtered. But the brutality of the deaths compared to the 1990s instalment does fit into the 1970s stereotypical slasher tradition, harking back to a pre-certification era when horror could afford to be more ruthless.

Figures in the Landscape: Rituals, Wilderness, and Canadian Cinema
Jennifer Wallis watches Rituals (1977) and explores Canadian wilderness on film in the tax shelter era.
Read More
Ansco Artworks: Lust for Life
Lust for Life, a 1956 biopic of artist Vincent Van Gogh, was shot on redundant film stock at director...
Read More
Crikey Moses! A Quick Look at the Making of The Ten Commandments (1956)
One special effect would dominate the film — the parting of the Red Sea. Julian Upton crosses Cecil B....
Read More
Offbeat Podcast
To coincide with the launch of the revised and updated Offbeat, a series of podcasts relating to the...
Read More
Last Night in Soho: In some ways surprising
Morgan Jones looks at Last Night in Soho to find a clumsy but unabashedly enjoyable psychedelic horror...
Read More
Carrying on in the country house: Andrew Sinclair’s Blue Blood
JENNIFER WALLIS on Andrew Sinclair’s 1973 film, Blue Blood, its real-life and fictional inspirations,...
Read More
“I ended up being in two of their films that night”
What is a custom movie? David Kerekes looks at Mail Order Murder: the Story of W.A.V.E. Productions and...
Read More
Fear Street: Part Three – 1666
In the final instalment of her Fear Street review trilogy, Lakkaya Palmer considers the history lessons...
Read More
Fear Street: Part One – 1994
It’s made a bloody splash on Netflix this July, but is the Fear Street trilogy just for kids? Lakkaya...
Read More
'As topical as tomorrow': Robert Fuest’s Just Like a Woman
Jennifer Wallis reviews Network’s newly-restored DVD release of Just Like a Woman (1966), and enters...
Read More