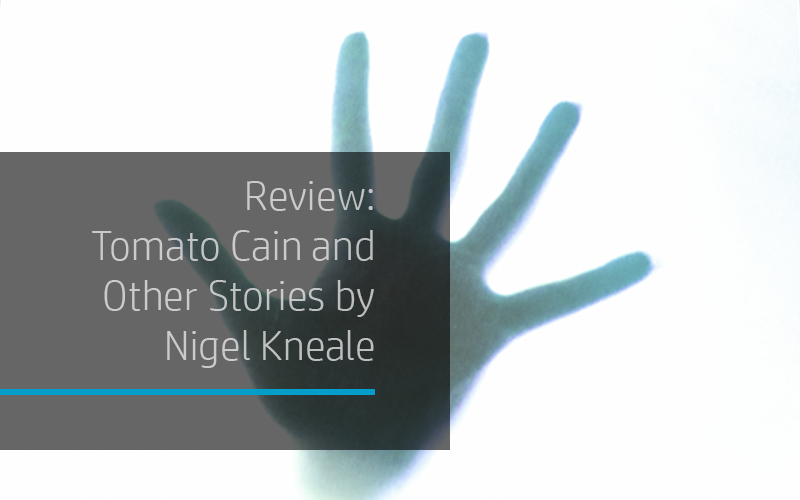 Tomato Cain and Other Stories by Nigel Kneale

Allowing the writer to ‘get away with’ more

In January this year The Observer reported that the short story was enjoying a Renaissance: the pandemic had led people to appreciate a ‘fragmented’ format in a fragmented time, as well as providing the opportunity for many to try their hand at writing their own short stories. New publishers such as Scratch Books have dedicated themselves entirely to the short story. Although the short story was widespread in Britain in the 19th century – a perfect fit for weekly and monthly periodicals like The Strand or Dickens’ All The Year Round – there is a general sense that it was somewhat eclipsed by the novel in the 20th century. Whether the short story ever really disappeared from the British literary landscape is debateable. But there has sometimes been a certain sniffiness about it in recent decades: an idea that somehow a collection of short stories is ‘less than’ a novel. Yet, the short story is an incredibly difficult format to get right (as one of those aspiring pandemic short story writers, I speak from experience). There’s no room for waffling or extraneous conversation, everything needs to be done and dusted as quickly as possible. But the short story also often allows the writer to ‘get away with’ more, in terms of experimentation and fantastical themes.

The potential of the short story is brilliantly illustrated, then, in Tomato Cain and Other Stories, recently published by Comma Press. Penned by Quatermass and Beasts creator Nigel Kneale and originally published in the UK in 1949, Tomato Cain has been out of print for decades, with copies of the original book something of a Holy Grail for Kneale fans. Although he is best known for his film and television work, Kneale was an accomplished writer of short stories, being published in popular 20th-century magazines such as Harper’s and Argosy. Tomato Cain, republished here with the original foreword by author Elizabeth Bowen (who also, interestingly, notes that readers in the 1940s had ‘become less shy of the short story’ – clearly love for the format is a cyclical thing), is an astonishing set of tales, ranging from the supernatural to the darkly comic.

Scientific and the supernatural

It will be no surprise to Kneale fans that many of the stories are set on the Isle of Man (although not born there, Kneale moved to the island with his family as a child). Suddenly, many of Kneale’s preoccupations in his later TV and film work begin to make sense. Animals are prominent in these stories, both the real and the fantastical: a sea serpent, a duck, plagues of frogs and rats. The melding of the scientific and the supernatural that was encapsulated in the celebrated Manx case of ‘Gef the Talking Mongoose’ in the 1930s can hardly have failed to influence Kneale, and throughout Tomato Cain we see these influences stretching into both past and future. ‘The Pond’ is a perfect horror story, referencing the weird creations of English taxidermist Walter Potter, whose 19th-century dioramas of dining frogs and croquet-playing kittens seemed calculated to inspire a sense of unease in the viewer. And Beasts fans will immediately see the stirrings of During Barty’s Party in ‘The Stocking’ – although here the horror is more lurid and James Herbert-esque than the subtle psychological approach that Kneale would later employ in much of his television work. ‘Minuke’ is a stand-out of the collection, presaging the main themes of Quatermass and the Pit and The Stone Tape: long-forgotten things lurk underground, while the walls of a house can be heard ‘breathing’.

‘Flo’ is an absolutely savage read

Indeed, more than anything the stories showcase Kneale’s ability to focus unflinchingly on the very worst of human nature (‘Flo’ is an absolutely savage read), at the same time peppering his prose with dark humour. As Andrew Screen notes in his review of the collection, there are moments reminiscent of Roald Dahl’s short stories (‘Essence of Strawberry’), where simmering hatred is expressed in an almost cartoonish way. Tension is the hallmark of the collection: between young and old, between men and women, between urban and rural, between science and the supernatural. The stories, as Bowen writes in her preface, have ‘an atmosphere which one can cut with a knife’. Personally, I preferred those stories that were more ‘typically’ Kneale – the horrific, the weird, and the supernatural. The handful of tales that are set outside Britain, or in different historical periods (such as the Ancient Egyptian ‘The Terrible Thing I Have Done’) are still brilliant, but perhaps feel less confident than ‘Minuke’ or ‘Mrs Mancini’.

With an Introduction by Mark Gatiss, Notes by Andy Murray, and beautiful cover art by Ruth Packer, this new edition of Tomato Cain is a volume to be read and re-read, with stories that linger in the mind long after the pages are closed. I leave the last word to the elderly Mrs Berrilee in the inspired ‘The Calculation of N’Bambwe’: “I simply dote on ghost stories […] I like to go to sleep quaking with fright, so I read them whenever I can.”

Toddler Hunting and Other Stories by Taeko Kono

The Sing of the Shore by Lucy Wood

Jennifer Wallis is a historian of science, medicine, and technology, also distracted by British film and television of the 1970s, horror cinema, and power electronics.
Posts by this Author
PrevPreviousOffbeat Bingo
NextRecognition Of Fertility Gods: Gathering Of The Tribe PlaylistsNext

Offbeat Bingo
A list of films discussed in the recent Offbeat online panel event, handily crafted so you can mark them...
Read More
Figures in the Landscape: Rituals, Wilderness, and Canadian Cinema
Jennifer Wallis watches Rituals (1977) and explores Canadian wilderness on film in the tax shelter era.
Read More
Science — A Ghost Story for Our Time
A paranormal experience leads David Kerekes to consider two magazine subscriptions and 'reality' as a...
Read More
New Year, New You: 100 ways to improve your life
From fun with mould to making it Halloween all year round, Wallis and Wilson offer you 100 ways to almost...
Read More
Carrying on in the country house: Andrew Sinclair’s Blue Blood
JENNIFER WALLIS on Andrew Sinclair’s 1973 film, Blue Blood, its real-life and fictional inspirations,...
Read More
'As topical as tomorrow': Robert Fuest’s Just Like a Woman
Jennifer Wallis reviews Network’s newly-restored DVD release of Just Like a Woman (1966), and enters...
Read More
Heart surgery and heartache in Behind the Mask
Jennifer Wallis reviews Network’s newly-remastered release of Brian Desmond Hurst’s Behind the Mask (1958),...
Read More
‘This happy place’: The uncanny appeal of The Sentinel
Tasteless or underrated? Jennifer Wallis makes the case in support of Michael Winner’s supernatural horror...
Read More
A Thriller in Every Corner, Part 2
Part 2 of our interview with A THRILLER in Every Corner author Martin Marshall. The darker side of the...
Read More
A Thriller in Every Corner
MARTIN MARSHALL’s recent book, A THRILLER in Every Corner, is a meticulously researched valentine to...
Read More