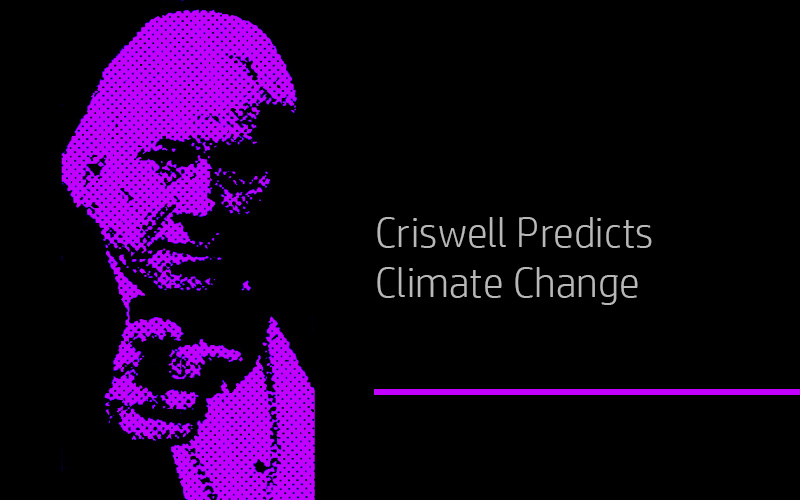 Read the forbidden predictions of the Amazing Criswell, king of the pop celebrity psychics, noted for his bizarre predictions and Ed Wood films!
“I predict that one catastrophe will follow after another in quick succession and Mother Nature will show man that she is still mistress of the Universe.”
Criswell Predicts!
Criswell Predicts Climate Change

In a general way, a number of Criswell’s predictions could be called accurate, such as shifting from paper money and coins to credit cards and other electronic forms of currency, electronic instant-delivery of mail, constantly updated news reports, increased government surveillance, tragedy and scandal for the British royal family, private companies taking over duties of the postal service, a greatly increased reliance and dependence on technology that Criswell called “automation,” the generation of “contented discontents” who only derive pleasure and satisfaction from complaining, and of course, bizarre weather, catastrophic storms, and devastating natural disasters.

As the peril to our planet increased and the awareness of its ecological destruction during the late 20th century, due to human exploitation and pollution of the Earth, Criswell delivered predictions in his own inimitable way via syndicated newspaper columns, books, audio recordings, and TV and radio appearances.

“I predict that winds of a violent nature will sweep the great plains in one of the worst weather upheavals in weather history!”

“I regret to predict a series of storms on the Atlantic and the Gulf of Mexico areas, some violent and some more violent! The midwest floods! The Rockies! Late snows! The West Coast! A small series of quakes which will bring more damage!”

“When the polar ice caps melt the world will be in for a shock! Many monsters, frozen for thousands of years in the ice will suddenly revive and again walk the earth.” 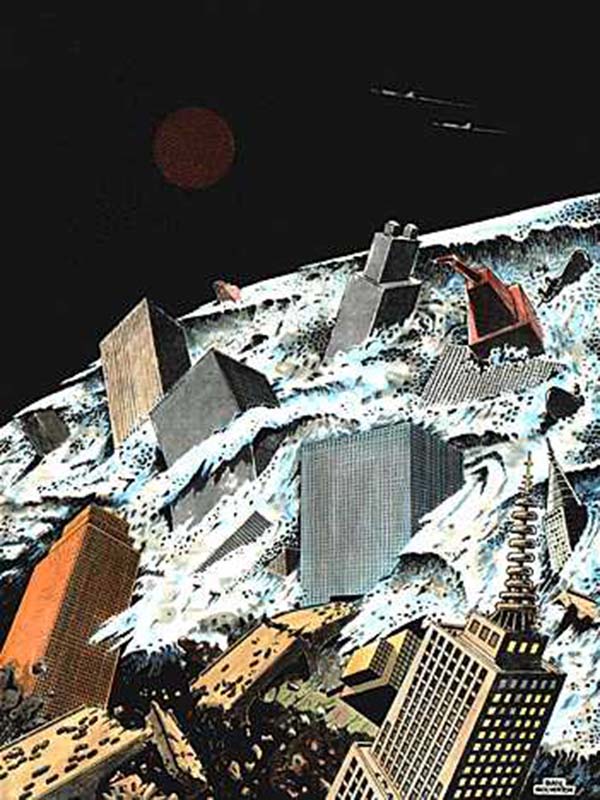 In his first book, Criswell Predicts From Now to the Year 2000! (1968), he foresees “The Great Drouth and Flood” changing the face of the earth beginning in 1977. “And I predict that the world of tomorrow faces repeated onslaughts by the uncontrollable forces of mother nature — more onslaughts, of a stronger type than have ever been recorded in a comparable short span of history.” “Rain will not fall for a period of ten months. I predict that our great lakes will become beds of sand and rivers will slow down to a trickle. Waterfalls such as the Niagara and the Victoria will be silent for there will be no water to create their endless roars we know of today. The tides of the ocean will end, leaving huge ships stranded and aground. This will have a far reaching effect, for world trade will be practically halted. When the world is struck by this horrible drouth, I predict that the electric power will fail in many sectors for the dams which supply this energy will stand useless and deserted and empty. Scientists will be called upon to help save human lives for the world reservoirs will become dangerously low. Every nation will limit the use of water. Chemicals will be used for cleansing purposes. Drinking water will be measured for every individual and cattle will be slaughtered to prevent their death by dehydration. You will be given so much water each day. A cupful of water which you will guard very carefully and of course, value beyond precious gems. I predict that our world faces the worst drouth it has ever known.”

He then details the death and destruction across the world caused by the great drought with it ending by the power of  prayer. “I predict that universal prayers and religious ceremonies will be held pleading for rain. I further predict that this drouth will gradually cease but mother nature will shower the helpless earth with even a more horrible disaster.” “Black rain clouds of devastation will cover over Europe and the deluge will begin. It will be slow at first with small showers each day. Later, I predict, the rains will increase until, in time, the sun will be blacked out and rain will fall in an endless cascade.” 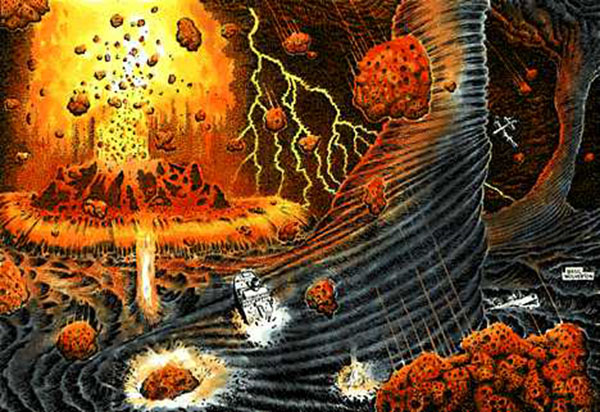 THE DEATH OF OUR PLANET

I predict that we have reached the point of no return in our plunder of our planet!

We have drained the oil from the underskin of the earth, dug the metals out which gave the earth consistence, hacked and mutilated the natural areas, tampered with the climate by irrigation, false rivers, lakes and canals. I predict that this will take a heavy toll of existing protective forces. The insect world, the animal world, the fish of the sea and the plant life will prove to be no friend of ours in the final showdown, when the world will return to a former unspoiled, unoccupied state — a point of no return! 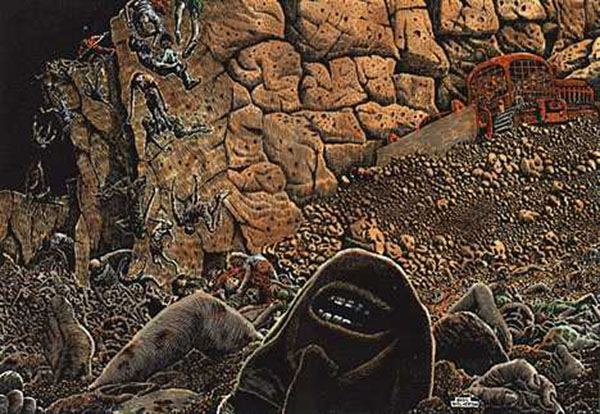 BEGINNING OF THE END

Man will harness nature. Capture the sunlight, combine it with the atom and live in a push button world! The Prophets of the world have predicted through trend, precedent, pattern of habit, human behavior, and the unalterable law of cycle, that the 20th Century would be our last. No prophet predicted beyond the date of 1999! Does that mean we will suddenly run out of time?

Even our Bible foretells the end of all the lives. So let us drink a toast to the days that remain, so that we may live each day at a time. Ah, make the most of what we yet may spend, Before we too into the Dust descend; Dust into Dust, and under Dust to lie, sans Wine, sans Song, sans Singer and sans End!

Yes, the fate of the world is in our hands. But our greed, plus the genius of science, will destroy! The final war, the most terrible war, is at the very end of the Ribbon of Time! But, this is not a war of man against man, nation against nation! This is a war of man against the Earth! Man, in the clutches of inhuman greed and lust, will destroy not only himself, but the very earth that gave him life! His knife plunges deeper and deeper into the heart of Mother Nature, until Mother Nature, herself, revolts against man! Just as the world was created in seven days, it will be destroyed in seven days! Mysteries of Nature held captive since the beginning of Time, will unleash hellish, pent-up silent fury. 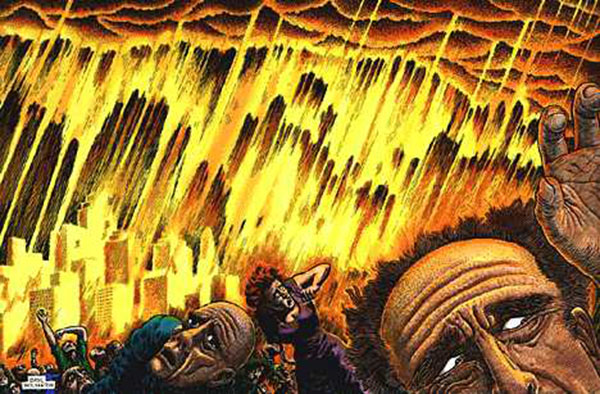 THE DELICATE BALANCE OF NATURE

I predict that we will soon have a new cycle of bad weather! The protective skin surrounding our earth has been punctured, leaving us at the mercy of the elements of the thin cruel air of the universe! In our eager push for science, we have upset the delicate balance of Mother Nature, and she will turn on us in a wrathful manner! Remember this prediction!

“Oh my friend, coming events have already cast their shadows and whether you believe it or not, this is all to be a part of your INCREDIBLE future! Mother Nature destroys as Mother Nature creates, for this is the law of life. Time is endless and the future is only a continuation of the past!”
Criswell Predicts!

Edwin Lee Canfield is a writer whose fascination and obsession with the life of the amazingly eccentric Criswell originated after seeing him in Ed Wood’s Plan 9 from Outer Space and reading the book, Criswell Predicts From Now to the Year 2000! When not researching and working on “laid bare” biographies, he spends his time watching obscure films and exploring ghost towns.
Posts by this Author
PrevPreviousA visit to The Horror Show! A Twisted Tale of Modern Britain
NextCriswell Returns From the Grave!Next

Criswell’s Hall of Shame: Crimes Against Womanhood (Criswell Predicts Women’s Lib!)
Among his many predictions, Criswell often returned to one particular forecast: womankind’s domination...
Read More
Criswell Returns From the Grave!
Ed Canfield talks about the Zodiac Club and the strange time he made brief psychic contact with Criswell,...
Read More
Science — A Ghost Story for Our Time
A paranormal experience leads David Kerekes to consider two magazine subscriptions and 'reality' as a...
Read More
My Bones and My Flute: Remembering Edgar Mittelholzer
David Kerekes explores childhood and two novels by Edgar Mittelholzer, My Bones and My Flute and The...
Read More
JOHN CALE IN THE ’70s
In the mid-70s, John Cale released three albums on Island Records. It's an exceptional period for the...
Read More
Dangerous Encounters: The Horror Film Fanzine as a Subversive Art
A single staple is the most primitive of zine bindings. Find out why Colton Cobb's Dangerous Encounters...
Read More
New Year, New You: 100 ways to improve your life
From fun with mould to making it Halloween all year round, Wallis and Wilson offer you 100 ways to almost...
Read More
‘I press the shutter and it’s my way of saying WTF’
"A sense of permanence, like an old idea of a dystopian future," is how David Kerekes describes the photographs...
Read More
‘Strangehaven? Can’t even find Strangehaven on this bloody map…’
An archive interview with Gary Spencer Millidge about the strange village of Strangehaven, now a milestone...
Read More
A Thriller in Every Corner, Part 2
Part 2 of our interview with A THRILLER in Every Corner author Martin Marshall. The darker side of the...
Read More