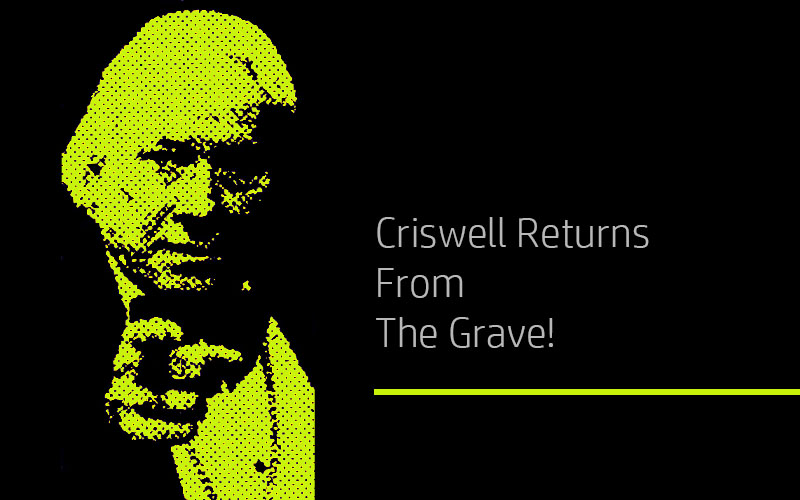 Criswell Returns From the Grave!

Ed Canfield talks about the Zodiac Club and the strange time he made brief psychic contact with Criswell, self-proclaimed 20th century Nostradamus.
“Ah, Greetings my friend. We are all interested in the future for that is where you and I are going to spend the rest of our lives, whether we want to or not! And remember my friend, these future events will affect you. The future is in your hands. So let us remember the past, honor the present, and be amused at the future.”
Criswell Predicts!
Criswell Returns From the Grave!

CRISWELL ALSO KNOWN as “Criswell Predicts!” dubbed himself the “20th Century Nostradamus” and based on “trend, precedent, pattern of habit, human behavior, and the unalterable law of cycle!” he claimed 87% accuracy in his predictions. Cris to his friends, is known mainly for his opening monologue, narration, and closing comments in Ed Wood’s Plan 9 From Outer Space (1956), but his career went well beyond that and his persona was a product of the continuing growth and onslaught of mass media during the mid-twentieth century. He hosted his Criswell Predicts show on local Los Angeles television, penned a syndicated column that was in 300 to 400 newspapers nationwide, hosted radio programs on over eighty-five stations, made numerous guest appearances on Los Angeles television programs and network talk shows such as Jack Parr and Johnny Carson’s Tonight Show and the Mike Douglas and Merv Griffin shows. Always productive, he also authored three books of predictions, released a record album of predictions, and appeared in two other Ed Wood films as well. 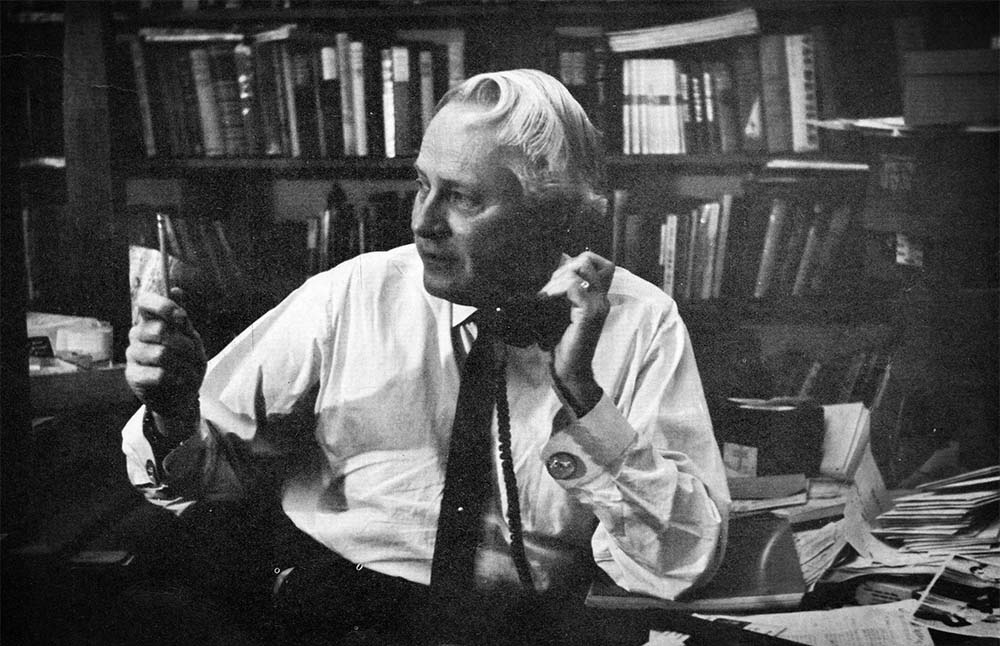 The Amazing Criswell is one of the first pop-celebrity psychics. His ever present black tuxedo with sequined lapels symbolized the razzle-dazzle Hollywood showmanship that drew his loyal following throughout the mid to late 1950s. His place among the assorted cast of characters that were Ed Wood’s friends, his lifelong friendship with Mae West, his unusual home life with his eccentric and provocative wife Halo Meadows, and his volumes of predictions, most extremely bizarre and inaccurate, further solidified his place amongst Hollywood’s mysterious and macabre. Among his close circle of friends, he openly denied any psychic abilities and freely admitted himself to be a fraud. That sentiment was not shared among a number of his friends and associates, many of which continued to believe that Criswell did possess psychic talents. Glamour ghoul Vampira aka Maila Nurmi said, “He claimed he was not psychic. I know he was. John believed it too. But the prophecy was intended to shock. And he said, ‘No, I’m not. I’m not psychic.’ It was for the money was understood, it was inferred, but he didn’t say it.”  He himself claimed he had possessed the gift of prophecy but lost it when he began to make money from it.

In his book from 1968, Criswell Predicts From Now to the Year 2000!  he prognosticated that the world would come to an end on August the 18th, 1999, also coincidentally his birthdate in 1907.

On the one-hundredth anniversary of Criswell’s birth, I decided to imbibe myself with a few double Beefeater martinis, his favorite drink, at a local dive called the Zodiac Club. It had seen it’s better days during the late sixties and early seventies when “What’s your sign?” was a serious pick-up line. After a couple of cocktails, I began to feel lightheaded and put my head on the bar. I must have passed out for a bit and as I began to wake, I sensed someone standing next to me where there was no one before. I slowly raised my head and focused my blurred vision on the mirror behind the bar. The bar had changed. This wasn’t the Zodiac Club. This place was right out of 1955. Behind me I could see where the exit from the bar entered into a plush art-deco style hotel lobby. The hazy figure standing next to me was wearing a dark suit and tie. He was sipping a martini and had a strange, large ring on the extended pinkie finger of the hand holding the glass. I raised my head more and looked toward the face. He looked familiar. Then I saw the hair. It was Criswell! Somebody must have put something in my drink. I rubbed my eyes and looked again at the reflected image in the mirror behind the bar. He was still there. I turned to my right as he turned towards me. An ominous silence filled the air, like the breaking point of a coming storm. His image caused me no fright, as he seemed so kind and so natural.

“Greetings my friend, I am Criswell!” he intoned.

“Yes, I know.” I answered. “I’m writing a book about your life. What are you doing here?”

“I have come back from across the wounded galaxies to make my final prediction, and to thank you for the fine work you’ve done on my biography. I predict it will be an unprecedented success!” he replied.

“Is that your final prediction? That my book will be a success?”

He carefully explained that he was editing his predictions. “No my friend, I know that my previous prediction for the end of the world did not come to pass, but now that I am an inhabitant of the nether realms, I have more insight into coming events than when I was a mere mortal.” 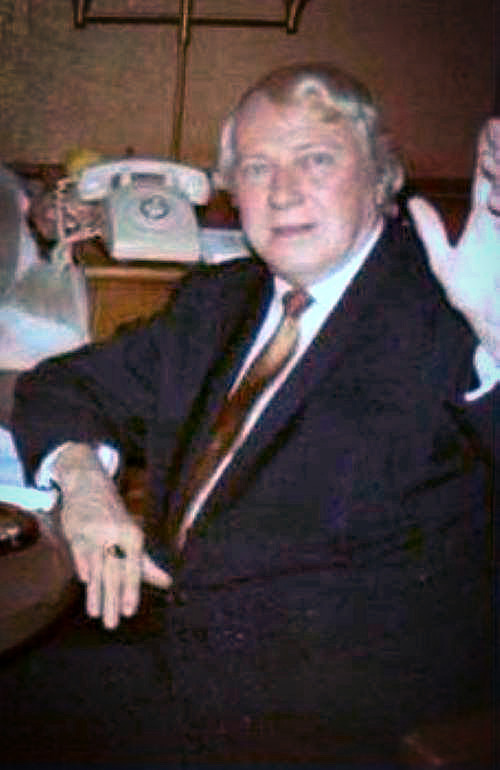 The galactic and solar planes

He looked away from me, gazed slightly upward as if looking into the voidness of space and continued speaking in his stentorian, hypnotic voice. You could hear time marching ahead. I gazed into his mesmerizing, azure blue eyes and my mind became relaxed and attentive, and my powers of retention became multiplied. I was suddenly moved to another time, another place. The voidness of space. Soon I was not conscious of his voice and the entire scene was a mental exchange of words. “My dear friend of the 21st century, I am in awe of your awesome future and I will tell you why. My voice trembles as I recite these lines of prophecy. Knowing in the future that a selected few of the 21st century will hear them and take heed. I somehow know that someone in the 21st century will again unfurl my banner and wave it high in honor of my forbidden prediction. Ancient Mayan mythology is intimately related to the celestial movements of stars, the Milky Way, and certain constellations. Through astronomy they developed a calendar system that was amazingly accurate. The end date of the great Mayan calendar comes at a time as a rare celestial alignment culminates. An alignment between the galactic and solar planes as the winter solstice sun conjuncts the dark rift of the Milky Way. The Mayans believed that this rare occurrence is when the First Father, the winter solstice Sun, is birthed from the First Mother, the dark-rift of the Milky Way, creating a new world age. Mark this date on your calendar, December 21, 2012! I pass this burning torch to you to carry on in your Olympics of Life. I cannot predict what earth shattering events will occur on this dreadful date, but be assured my friend that it is all to be a part of your wondrous future.”

He then looked back towards me, raised his martini in a toast and drained it dry with a smile. “Now I must go as my short time allowed on this plane of existence has run out. Good night my dearest friend, and God bless you.” Before I could say anything, he turned and gracefully walked towards the exit. The sound of the song “Pomp and Circumstance” somehow filled the air. When he reached the entrance to the hotel lobby he turned back, waved, and then faded away into the hotel lobby.

Next thing I knew, I pulled my head up from the bar again and was back in the Zodiac Club. I looked up at the clock as it struck midnight. To me the incident with Criswell was no fantasy, no dream, and no imaginary voyage into non-reality. Criswell was no paper cutout, but a living, breathing human. His solidity astounded me. Was there an inter-change of souls between Criswell and myself? I will admit that I lived, read, studied, and absorbed the personality of Criswell for a number of years before I would dare to present his forbidden predictions. Did I become entranced as did Bridey Murphy, the traveler between two worlds, or an H.G. Wells, Lewis Carroll, or Jules Verne? Was I possessed by the over-powering strength of Criswell, or was it merely wishful thinking? I can deny wishful thinking as I have been most impersonal!

Criswell’s prediction for the end of mankind was again wrong and he is gone . . . but he left behind the heritage which I now leave to you and here I have presented his final forbidden prediction as living proof that some contact was made!

Edwin Lee Canfield is a writer whose fascination and obsession with the life of the amazingly eccentric Criswell originated after seeing him in Ed Wood’s Plan 9 from Outer Space and reading the book, Criswell Predicts From Now to the Year 2000! When not researching and working on “laid bare” biographies, he spends his time watching obscure films and exploring ghost towns.
Posts by this Author
PrevPreviousCriswell Predicts Climate Change
NextCriswell’s Hall of Shame: Crimes Against Womanhood (Criswell Predicts Women’s Lib!)Next

Criswell’s Hall of Shame: Crimes Against Womanhood (Criswell Predicts Women’s Lib!)
Among his many predictions, Criswell often returned to one particular forecast: womankind’s domination...
Read More
Criswell Predicts Climate Change
Read the forbidden predictions of the Amazing Criswell, king of the pop celebrity psychics, noted for...
Read More
Science — A Ghost Story for Our Time
A paranormal experience leads David Kerekes to consider two magazine subscriptions and 'reality' as a...
Read More
My Bones and My Flute: Remembering Edgar Mittelholzer
David Kerekes explores childhood and two novels by Edgar Mittelholzer, My Bones and My Flute and The...
Read More
New Year, New You: 100 ways to improve your life
From fun with mould to making it Halloween all year round, Wallis and Wilson offer you 100 ways to almost...
Read More
Hoagy Carmichael's Music Shop
The Stark Reality...Discovers the Hoagy Carmichael Music Shop is without doubt one of the strangest records...
Read More
Doctor Who: The Dæmons
The Dæmons is a Doctor Who adventure in which devils come to life. Discussing the Nigel Kneale influence...
Read More
In Praise of Noise: The Deafening Silence of the Pandemic
The pandemic has made the world a quieter place. Jennifer Wallis misses the noise, and writes here about...
Read More
Doctor Who: Spearhead from Space
Showroom dummies are taking over the world! Once described as ‘highly coloured science fiction for older...
Read More
Ladies and gentlemen, the “practically unsinkable” man!
The strange but true tale of drowning, dogs, and inflatable men. Ladies and gentlemen, Henry Silvester,...
Read More