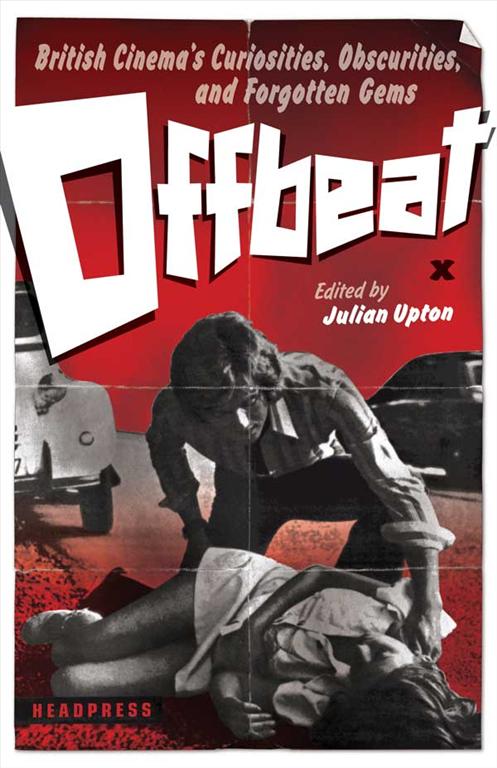 Critics may sing from an over familiar hymn sheet of so-called ‘cult films,’ but there remains an epoch of British cinema still awaiting discovery that is every bit as provocative and deserving of attention. And there could be no finer guide to these uncharted domains than Offbeat. This is the book for the more intrepid cinema lover. A passionate, irreverent and informative exploration of British cinema’s secret history, from the buoyant leap in film production in the late fifties to the dying embers of popular domestic cinema in the early eighties. So, move over Peeping Tom, Get Carter and The Wicker Man — it’s time to make way for The Mark, Unearthly Stranger, The Strange Affair, The Squeeze, Sitting Target, Quest for Love, and a host of forgotten gems. Offbeat features in-depth reviews of more than 100 films, plus interviews and eye-opening essays that together tell the wider story of film in Britain, its neglected cinematic trends and its unsung heroes. With contributions from James Oliver, Jennifer Wallis, David Kerekes, Martin Jones, Graeme Hobbs, Gary Ramsay, David Sutton, Darrell Buxton, Sarah Morgan, Sam Dunn, Andrew Syers, David Slater, Phil Tonge, David Hyman, Mark Goodall and Kim Newman

ANDREW SYERS is author of the novel Long Distance Sleepwalker (2010) and the play You’ve Been a Wonderful Audience (2008). longdistancesleepwalker.blogspot.com

DARRELL BUXTON is the editor of The Shrieking Sixties: British Horror Films 1960–1969 (2010). He is also a freelance lecturer, resident ‘cult movie historian’ at Derby’s Quad arts centre, and was a frequent contributor to the UK fanzines Samhain, Giallo Pages and We Belong Dead.

DAVID HYMAN was born in London. He has enjoyed watching films from an early age and often thinks some short films are more memorable than the main features they supported. He is currently employed as an Examiner at the BBFC (British Board of Film Classification).

DAVID SUTTON is editor of Fortean Times magazine, and has written on film for numerous publications. He has a PhD in Film Studies, has lectured on British cinema history and is the author of A Chorus of Raspberries: British Comedy Films 1929–39 (2000). He divides his time between London and the Kent coast.

GRAEME HOBBS lives in the Welsh borders, where he writes and podcasts on film for MovieMail and makes eclectic chapbooks in his Colva Books series. A regular correspondent for Vertigo and Artesian, a collection of his writing entitled Let Yourself Be Broken, and which is far happier than it sounds, is currently in preparation.

JAMES OLIVER has written for Sight & Sound, Total Film, The Idler and many other less acclaimed (and, indeed, less salubrious) publications.

KIM NEWMAN is a critic, author and broadcaster. He is a contributing editor to Sight & Sound and Empire magazines. His books about film include Nightmare Movies and Kim Newman’s Video Dungeon. His fiction includes the Anno Dracula series, The Hound of the D’Urbervilles and An English Ghost Story. He has written for television (Mark Kermode’s Secrets of Cinema), radio (Afternoon Theatre: Cry-Babies), comics (Witchfinder: The Mysteries of Unland) and the theatre (The Hallowe’en Sessions), and directed a tiny film (Missing Girl). His latest novel is Something More Than Night (Titan Books). His web-site is at www.johnnyalucard.com. He is on Twitter as @AnnoDracula.

MARTIN JONES is the editor of Bedabbled! British Horror and Cult Cinema. He is also the author of Psychedelic Decadence: Sex Drugs Low-art in Sixties and Seventies Britain (Headpress, 2001) and editor of Lovers Buggers & Thieves (Headpress, 2005).

PHIL TONGE is a cartoonist, writer and painter born and raised in the Forest of Dean, Gloucestershire. His work has meandered through a multitude of so-called ‘outsider’ publications from the 1980s to the present day. He currently lives in Nottingham and has ‘plans’ but no money or internet presence.

SAM DUNN is head of video publishing at the British Film Institute (BFI), and was previously general manager at Tartan Video. A champion of little-seen and under-appreciated British films, he has contributed writings to Sight & Sound and is responsible for shaping the cultural direction of the BFI’s internationally acclaimed DVD and Blu-ray label.

SARAH MORGAN is a TV Editorial Writer at PA Media’s northern HQ in East Yorkshire. She’s also a film and book reviewer for the On Yorkshire website and has penned articles for Bedabbled! British Horror and Cult Cinema. She has a degree in Fine Art and has completed a postgraduate course in Film Journalism at the BFI. When not watching obscure movies, she can usually be found supporting Sheffield Wednesday.