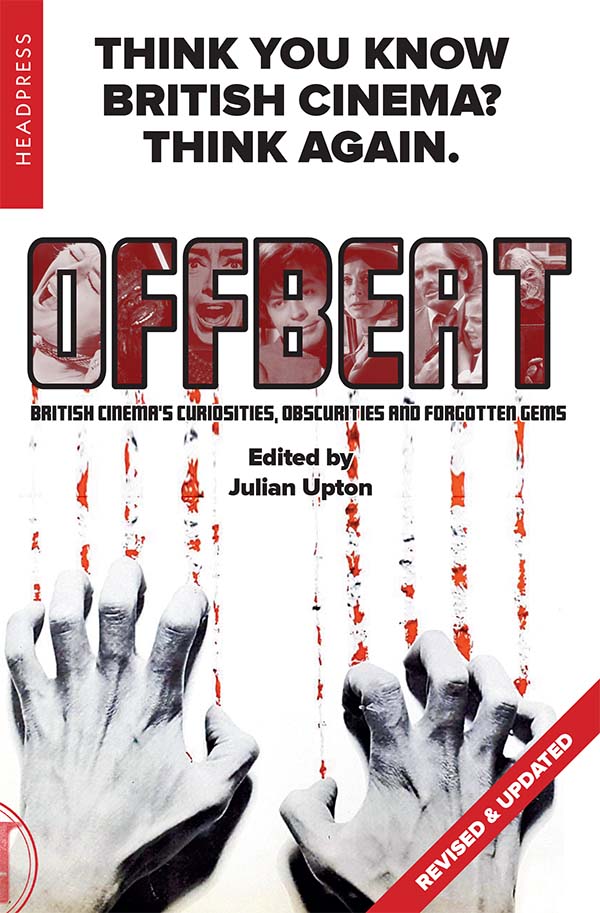 SUMMER FUN ITEM!Summer reading list: 35% discount on the paperback only for a very limited time. Enter the code SUMMERFUN at the checkout. View all SUMMERFUN items here. Cannot be used in conjunction with any other offers.
#1 Best Seller in BOOKS
15 people have ordered this item recently.

For years there has been consensus about the merits of Britain’s ‘cult films’ — Peeping Tom, Witchfinder General, The Italian Job — but what of The Mark, Unearthly Stranger, The Strange Affair and The Squeeze? Revisionist critics wax lyrical over Get Carter and The Wicker Man, but what of Sitting Target, Quest for Love and The Black Panther? OFFBEAT redresses this imbalance by exploring Britain’s obscurities, curiosities and forgotten gems — from the buoyant leap in film production in the late fifties to the dying days of popular domestic cinema in the early eighties.

Featuring essays, interviews and in-depth reviews, OFFBEAT provides an exhaustive, enlightening and entertaining guide through a host of neglected cinematic trends and episodes, including:

Now updated with more than 150 pages of new reviews and essays, featuring:

As the trade paperback, except the special hardback edition comes with an additional 16 colour plates.

This special NO-ISBN hardback is exclusive to this website. Because it carries No ISBN number, this edition of the book is off the grid in as much as it doesn’t appear on any database, in any library, cannot be ordered through mainstream bookshops or online retailers.

Christopher FowlerThe Independent
Read More
“You have to love OFFBEAT, Julian Upton’s perverse guide to British cinema’s strangest films because it disinters Peter Cushing’s ghastly low-point Corruption and lists The Impersonator, in which (spoiler alert) the killer is a pantomime dame. Behind You!“

Adrian SmithCinema Retro
Read More
“Every so often a book comes my way that I wish I had written. OFFBEAT is one such title...“
Previous
Next
Look Inside

Related Posts
Jennifer Wallis watches Rituals (1977) and explores Canadian wilderness on film in the tax shelter era.
Read More
Lust for Life, a 1956 biopic of artist Vincent Van Gogh, was shot on redundant film stock at director...
Read More
One special effect would dominate the film — the parting of the Red Sea. Julian Upton crosses Cecil B....
Read More
To coincide with the launch of the revised and updated Offbeat, a series of podcasts relating to the...
Read More
Morgan Jones looks at Last Night in Soho to find a clumsy but unabashedly enjoyable psychedelic horror...
Read More
JENNIFER WALLIS on Andrew Sinclair’s 1973 film, Blue Blood, its real-life and fictional inspirations,...
Read More
What is a custom movie? David Kerekes looks at Mail Order Murder: the Story of W.A.V.E. Productions and...
Read More
In the final instalment of her Fear Street review trilogy, Lakkaya Palmer considers the history lessons...
Read More
In her second blog on Netflix’s Fear Street trilogy, Lakkaya Palmer reviews the 1978 instalment, where...
Read More
It’s made a bloody splash on Netflix this July, but is the Fear Street trilogy just for kids? Lakkaya...
Read More

ANDREW SYERS is author of the novel Long Distance Sleepwalker (2010) and the play You’ve Been a Wonderful Audience (2008). longdistancesleepwalker.blogspot.com

DARRELL BUXTON is the editor of The Shrieking Sixties: British Horror Films 1960–1969 (2010). He is also a freelance lecturer, resident ‘cult movie historian’ at Derby’s Quad arts centre, and was a frequent contributor to the UK fanzines Samhain, Giallo Pages and We Belong Dead.

DAVID HYMAN was born in London. He has enjoyed watching films from an early age and often thinks some short films are more memorable than the main features they supported. He is currently employed as an Examiner at the BBFC (British Board of Film Classification).

DAVID SUTTON is editor of Fortean Times magazine, and has written on film for numerous publications. He has a PhD in Film Studies, has lectured on British cinema history and is the author of A Chorus of Raspberries: British Comedy Films 1929–39 (2000). He divides his time between London and the Kent coast.

GRAEME HOBBS lives in the Welsh borders, where he writes and podcasts on film for MovieMail and makes eclectic chapbooks in his Colva Books series. A regular correspondent for Vertigo and Artesian, a collection of his writing entitled Let Yourself Be Broken, and which is far happier than it sounds, is currently in preparation.

JAMES OLIVER has written for Sight & Sound, Total Film, The Idler and many other less acclaimed (and, indeed, less salubrious) publications.

KIM NEWMAN is a critic, author and broadcaster. He is a contributing editor to Sight & Sound and Empire magazines. His books about film include Nightmare Movies and Kim Newman’s Video Dungeon. His fiction includes the Anno Dracula series, The Hound of the D’Urbervilles and An English Ghost Story. He has written for television (Mark Kermode’s Secrets of Cinema), radio (Afternoon Theatre: Cry-Babies), comics (Witchfinder: The Mysteries of Unland) and the theatre (The Hallowe’en Sessions), and directed a tiny film (Missing Girl). His latest novel is Something More Than Night (Titan Books). His web-site is at www.johnnyalucard.com. He is on Twitter as @AnnoDracula.

MARTIN JONES is the editor of Bedabbled! British Horror and Cult Cinema. He is also the author of Psychedelic Decadence: Sex Drugs Low-art in Sixties and Seventies Britain (Headpress, 2001) and editor of Lovers Buggers & Thieves (Headpress, 2005).

PETER HOSKIN has written for — among others — the Times, the Daily Beast, the Telegraph, the Paris Review, and the Spectator, where he ran the daily political blog, Coffee House, from 2008–12. He also co-authored The Spectator’s 50 Essential Films with former editor Matthew d’Ancona.

PHIL TONGE is a cartoonist, writer and painter born and raised in the Forest of Dean, Gloucestershire. His work has meandered through a multitude of so-called ‘outsider’ publications from the 1980s to the present day. He currently lives in Nottingham and has ‘plans’ but no money or internet presence.

SAM DUNN is head of video publishing at the British Film Institute (BFI), and was previously general manager at Tartan Video. A champion of little-seen and under-appreciated British films, he has contributed writings to Sight & Sound and is responsible for shaping the cultural direction of the BFI’s internationally acclaimed DVD and Blu-ray label.

SARAH MORGAN is a TV Editorial Writer at PA Media’s northern HQ in East Yorkshire. She’s also a film and book reviewer for the On Yorkshire website and has penned articles for Bedabbled! British Horror and Cult Cinema. She has a degree in Fine Art and has completed a postgraduate course in Film Journalism at the BFI. When not watching obscure movies, she can usually be found supporting Sheffield Wednesday.