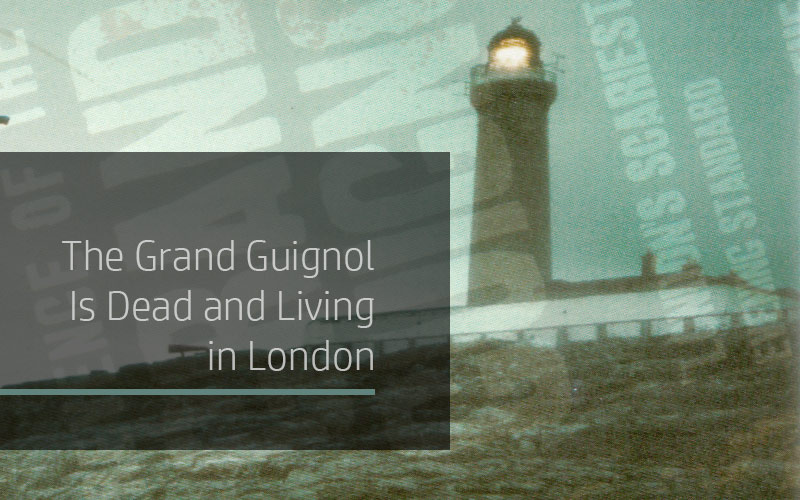 Anyone with an interest in Grand Guignol, the theatre in Paris whose name is a byword for horror beyond horror, may care to know that its vicarious thrills are alive on the boards again thanks to some small dedicated theatre companies in London and indeed around the world.

Anyone with an interest in Grand Guignol, the theatre in Paris whose name is a byword for horror beyond horror, may care to know that its vicarious thrills are alive on the boards again thanks to some small dedicated theatre companies in London and indeed around the world. Unlike the Parisian playhouse, a dedicated playhouse whose seasons ran between the years 1897 and 1962, these contemporary productions are invariably short run (as little as three days) and take place once a year at around Halloween time. They are rather easy to miss. The companies behind them, independent of one another, perform the type of chilling short dramas for which the Grand Guignol is best known. These might consist of adaptations of classic horror plays, or they might be new horror plays that evoke the spirit of the Grand Guignol. On occasion, they are not plays at all.

There are presently two companies in London of which I’m aware that perform such shows on an annual basis: The Sticking Place and Theatre of the Damned. One group is slick and seasoned, the other not so slick but gritty and enthusiastic, and each with a different feel for the Grand Guignol. Their respective performances last year were extraordinarily good. Alas, 2011 has proven a mixed bag for Grand Guignol in London.

This year the Sticking Place, in conjunction with Seabright Productions, got confused over what constitutes a horror story. Terror 2011: Love Me to Death misfired badly with a sloppy Halloween short hand for pantomime type scares. Last year the venue for Terror was the Southwark Playhouse, located in a courtyard near London Bridge, where the overhead railway gave each performance an interesting ambiance. The plays were tight and creepy (and in the case of Neil LaBute’s The Unimaginable, dare I say shocking), while even the cabaret interludes, which dampened the tension somewhat, were not entirely without merit. Terror 2011 by contrast is at the Soho theatre in the heart of Soho, where the cabaret has taken over. The audience is ushered to seats around small tables and have to contend with the lights going off every few minutes in what passes for spooky. The plays finish this way, too, the lights being extinguished in lieu of an ending. The opening play, Dave Florez’ The Waiting Mortuary, is the most formal of the evening and follows in the tradition of the one-act shockers of the Theatre of Grand Guignol. The rest of Terror 2011 is a grab bag of prose pieces and experimental writing (which reminded me of being at school), and for no good reason a striptease (the slavish introduction of this act as “burlesque” was the most unsettling thing about the evening; a tit is a tit by any other name). The performers handle what they’ve got well throughout. Ciaran Kellgren, who delivers the monologue ‘The Gong’ (by Jack Thorne), is particularly good, while the songs by Desmond O’Connor and Sarah-Louise Young are tasteless enough to elicit a groan. But no doubt about it: Terror for the Sticking Place this year had most definitely left the building.

In complete contrast is the Theatre of the Damned’s Revenge of the Grand Guignol. This is a more purist approach to Grand Guignol, stripping the stage to a relative minimum for a series of plays that quickly eschew the slim façade of rationality for all out barnstorming madness. The original Grand Guignol dramatists made much of madness and technology, and Theatre of the Damned see no reason to stray from this formula. The prolific playwright André de Lorde is an obvious and acknowledged influence. An adaptation of his play The Telephone is given a contemporary voice, and it unsettled the audience in a way that the adaptation of another de Lorde classic didn’t. Laboratory of Hallucinations (co-written with Henri Bauche) is no less a terror play; presented as a period piece instils in it a timeless and almost dreamy quality. I rather think this is more effective, as I do the prosaic dialogues about brain surgery and experiments… My review has hoodwinked me into debate and theory, so I’ll simply leave it there for now. Revenge of the Grand Guignol quite simply is not to be missed.

Revenge of the Grand Guignol is a part of the first London Horror Festival, most of which is taking place at the Courtyard theatre in Hoxton. You can’t miss it, it has friendly staff. This is a festival actively determined to stage serious adult horror and it rounds off its season with another company inspired by the Grand Guignol, Le Nouveau Guignol.

I do believe I’m quoting Richard J. Hand and Michael Wilson, authors of a couple of recent and recommended books on the Grand Guignol, when I say: The play isn’t made for the players but the players for the play. 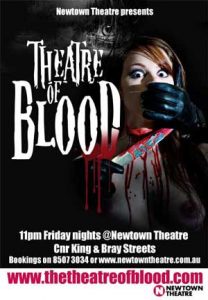 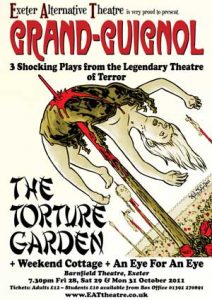 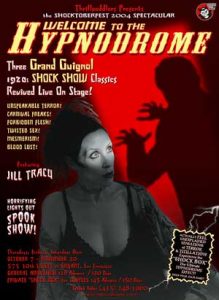 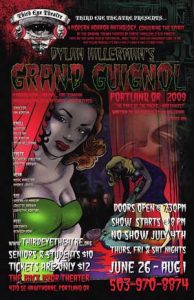 Also read: ‘Grand Guignol: Musings on the Parisian Theatre of High Drama and Comedy, and Its Contemporaries’, reflections on photographs from a Grand Guignol show.

David Kerekes founded Oil On Water Press and is one of the founders of Headpress. He has written extensively on popular culture, is co-author of the books Killing for Culture and See No Evil, and author of Mezzogiorno, a meditation on life and Southern Italy.
Posts by this Author
PrevPreviousThe Vampire Teeth of Vampire Circus
NextThe First Banned Coloring Book!Next

A visit to The Horror Show! A Twisted Tale of Modern Britain
Modern Britain by way of monsters, hauntology, and darker legends. DAVID KEREKES investigates The Horror...
Read More
When Folk Got Its Funk On
Traditional folk music with a peppermint flavour. David Kerekes reviews Deep In The Woods: pastoral psychedelia...
Read More
Offbeat Bingo
A list of films discussed in the recent Offbeat online panel event, handily crafted so you can mark them...
Read More
Science — A Ghost Story for Our Time
A paranormal experience leads David Kerekes to consider two magazine subscriptions and 'reality' as a...
Read More
What is an Offbeat film?
Julian Upton talks about obscure British movies and their part in his book, Offbeat: British Cinema’s...
Read More
My Bones and My Flute: Remembering Edgar Mittelholzer
David Kerekes explores childhood and two novels by Edgar Mittelholzer, My Bones and My Flute and The...
Read More
Dangerous Encounters: The Horror Film Fanzine as a Subversive Art
A single staple is the most primitive of zine bindings. Find out why Colton Cobb's Dangerous Encounters...
Read More
Last Night in Soho: In some ways surprising
Morgan Jones looks at Last Night in Soho to find a clumsy but unabashedly enjoyable psychedelic horror...
Read More
‘I press the shutter and it’s my way of saying WTF’
"A sense of permanence, like an old idea of a dystopian future," is how David Kerekes describes the photographs...
Read More
‘Strangehaven? Can’t even find Strangehaven on this bloody map…’
An archive interview with Gary Spencer Millidge about the strange village of Strangehaven, now a milestone...
Read More