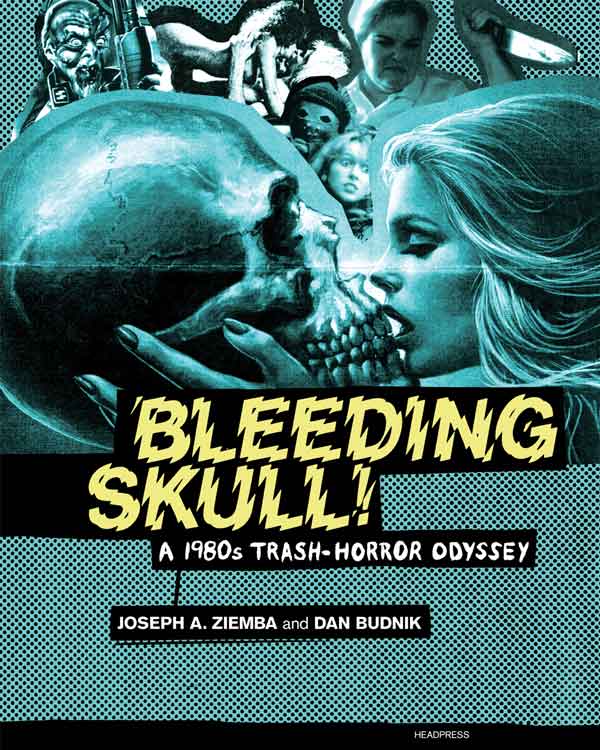 Jam-packed with rare photographs, advertisements, and VHS sleeves (most of which have never been seen), an edifying, laugh-out-loud guide through the dusty inventory of the greatest video store that never existed.

Sorry you missed the boat. This item is no longer available and will not be brought back into print.

BINGO ITEM!Congratulations, you have found an item that is generally out of print anywhere else, but copies are still available here. Get it now!

Clown midget slashers! The Indonesian Jason! A pregnant woman in a bikini who eats fried chicken before getting her fetus ripped out by a psychopath! It’s all here. And it’s all curated by the enthusiastic minds behind Bleedingskull.com, the world’s foremost authority on trash-horror obscurities.

A 1980s Trash-Horror Odyssey is the definitive resource on 1980s trash-horror cinema. Jam-packed with rare photographs, advertisements, and VHS sleeves (most of which have never been seen), BLEEDING SKULL! is an edifying, laugh-out-loud guide through the dusty inventory of the greatest video store that never existed.

NOTE: This is the original Bleeding Skull! Not the 1990s edition.

DANIEL BUDNIK’s book, Bleeding Skull!: A 1980s Trash-Horror Odyssey, was published by Headpress. His second book covers 1980s action films. He co-hosts a podcast on made for TV movies with Amanda Reyes. His writing can be found on the blog Some Polish American Guy Reviews Things. He lives in Los Angeles with his beautiful wife and many animals.

JOSEPH A. ZIEMBA was born and raised in the greater Chicagoland area. He’s an art director and film programmer for the Alamo Drafthouse in Austin, TX. In addition to creating Bleedingskull.com, he has toured extensively as a member of the bands Wolfie, The Like Young, Beaujolais, and Taken By Savages.