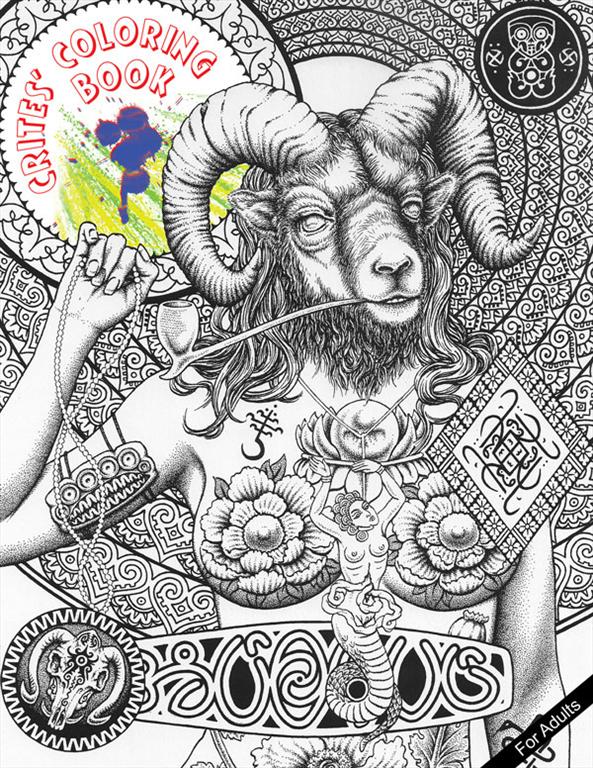 Adult coloring books are a big deal. The art in this one is cooler than most.

A talented artist with a thirst for music and literature, Tom Crites self-published zines and contributed to the small press for over two decades. He designed album covers and t-shirts, but also created art simply because he loved to do it, often leaving his work in public places for others to find. Throughout all of this, Tom struggled with mental health issues. In August 2013, at the age of forty-five, he committed suicide.

The artworks collected here were produced by Tom over many years and are representative of his unique and largely unsung talent. Some pieces were drawn at home in his apartment, watching films he would later review for zines or online; others he sketched whilst in hospital. All are suitable for framing. Be forewarned: There are no ‘mindfulness mandalas’ here, no kitsch exotic flowers to relieve the stresses of your desk job. Here is a darker beauty: macabre mysticism, human-animal hybrids, hallucinatory patterns, a melding of the sublime and the horrific. The works contained in this book are evidence of a symbolic anthropology and they embody the creative spirit that carried Tom through much of his life. Do not colour them lightly.

Fifty-eight beautiful drawings suitable for framing. Each page is printed single sided only.