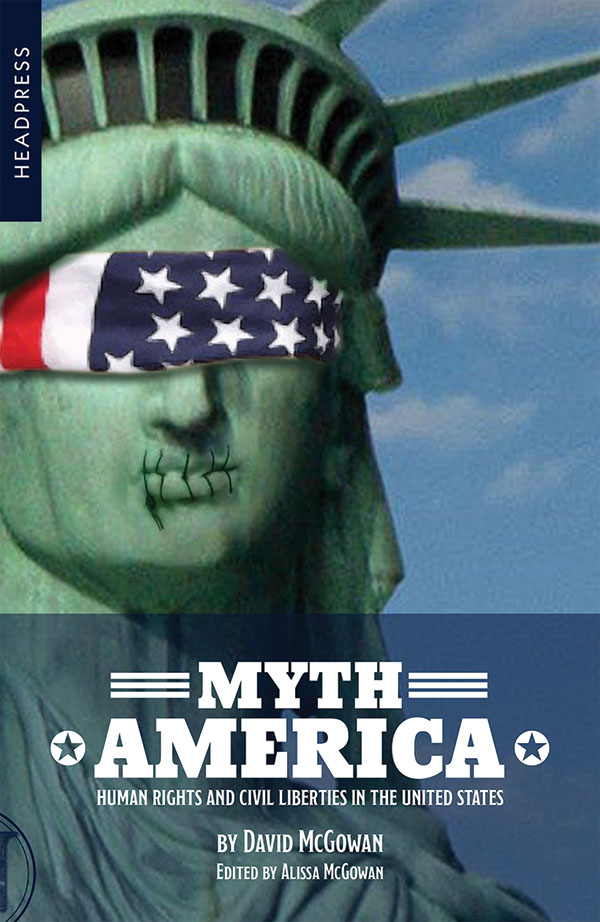 Human Rights and Civil Liberties in the United States

How fits the noose around democracy? An eye-opening look at the true state of American politics and culture today, by David McGowan.

LIMITED PERIOD DISCOUNT20% discount on the PAPERBACK EDITION ONLY. Enter the code PAPERBACK20 at the checkout

An eye-opening and prophetic look at the true state of American politics and culture today.

Is the U.S. a beacon of progress? That’s how the mainstream media want you to see it. But in Myth America, visionary researcher David McGowan presents an index of disturbing facts and ominous trends that illustrate the deep roots of America’s systems of oppression.

From mandatory minimum sentencing laws to more liberal search-and-seizure rules, from Three Strikes You’re Out to congressional legislation for a national ID card, McGowan shows how the noose around democracy has been tightening every day for decades—if it ever existed in the U.S. at all.

David McGowan is the author of the bestselling Weird Scenes Inside the Canyon: Laurel Canyon, Covert Ops & The Dark Heart of the Hippie Dream.

Myth America was his first book, originally published in 2000 under the title Derailing Democracy.

Democracy is not a spectator sport.

As the trade paperback, except the special hardback edition is exclusive to this website. Because it carries No ISBN number, this edition of the book is off the grid in as much as it doesn’t appear on any database, in any library, cannot be ordered through mainstream bookshops or online retailers.

Matt WozniakTalking Points Memo
Read More
Entertaining and stunning, this is a powerful read that thoroughly impacted my worldview. Psychedelic enthusiasts be warned; the idea of dropping acid loses so much appeal after realizing it’s a psyop tool of the US military.

The Daily Bell
Read More
Brilliant… McGowan presents ways cultural reconfiguration can take place secretly and powerfully, without anyone but a handful knowing it is happening."
Previous
Next
Look Inside

Related Posts
Headpress is very sad to report the news that David McGowan, author of Weird Scenes Inside the Canyon:...
Read More

ALISSA McGOWAN is the eldest of Dave’s three daughters. She holds a bachelor’s degree in English literature from UC Davis and an MA in the same subject from Cal State Northridge. In 2012, she left her job in corporate proofreading to start Red Pen for Rent (www.redpenforrent.com). She currently resides in Chattanooga, Tennessee, with her two partners, three cats, and two kids.